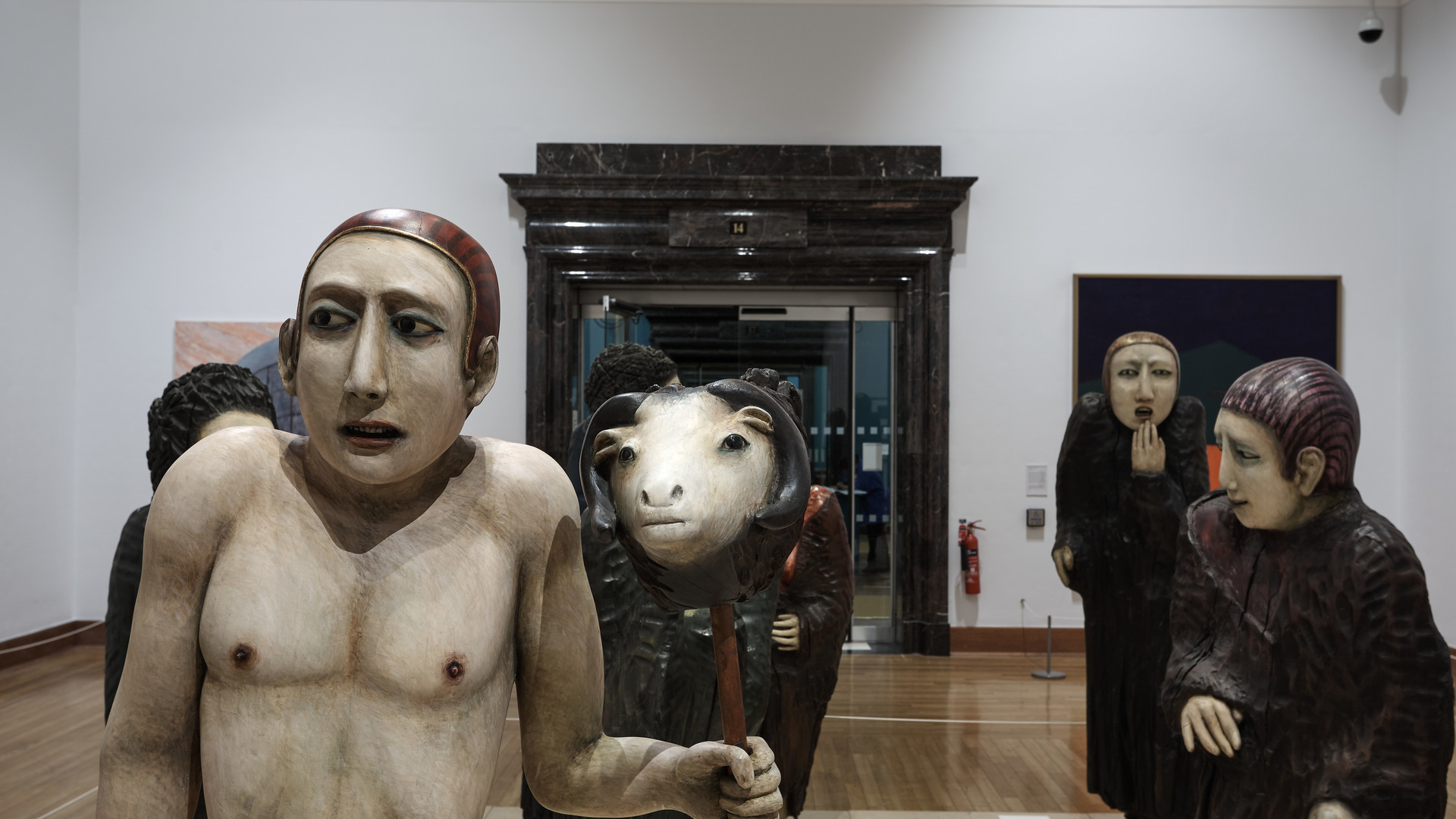 Written by Nadia Sommella
Published at 13:30 on 1 December 2019
Images by Birmingham Museum and Art Gallery

Thoughts on Portraiture, was a free exhibition running at Birmingham’s Museum and Art Gallery (BMAG). It explored the shift in art practice where portraiture began to be thought of as a way of showing the psychological state of the sitter, and in many ways the artist. Historically, portraiture was used to demonstrate wealth and power or to show a likeness, this exhibition dives into BMAG’s own modern art collection to display works of portraiture that look deeper into the human condition.

The installation Man and his Sheepby Ana Maria Pacheco dominates the exhibition space and one is immediately drawn to the unnerving expressions of her figures. The installation consisted of eight large uncanny human figures appearing to follow a male leader, who held a ram’s head on a spike. The individual figures stood life-size, we as the viewer could look at them directly in the eye and stand beside them as equals, luring the viewer in as one of the ‘man’s sheep’. The work explored the rituals and power dynamics human societies create, the difference between the group of followers and the individual leader. The follower’s expressions ranged from fear to excitement and create an eerie uncomfortable atmosphere that permeated through the exhibition as a whole.

The rest of the works on display consisted of paintings and prints hung on the walls. The exhibition is studded with a few famous names, Picasso, Auerbach, F.N Souza, but this is far from a blockbuster exhibition. If you attended having been seduced by the mention of Picasso, the exhibition would have inevitably underwhelm you. Thoughts on Portraiture was somewhat of a mishmash of styles and eras, the chronology and order we have come to expect from galleries is less present and it instead focuses on a theme, using art from the museums own collection to ‘answer’ the question posed. Interestingly, many artists turn to religion, mythology and animal imagery to try and untangle the complexity of emotion. In essence, what separates the human experience from that of animals and beasts?

At times the exhibition could feel hashed together, applying a loose theme in order to connect a vast range of artworks the BMAG happened to have in its collection. But in many ways, it was refreshing to be confronted as a viewer with varying mediums, styles and imagery and to make our own connections between the works providing room for our own opinions. It was not an easily digested exhibition on one artist or movement, but it did do what I feel it set out to: provoke thought.