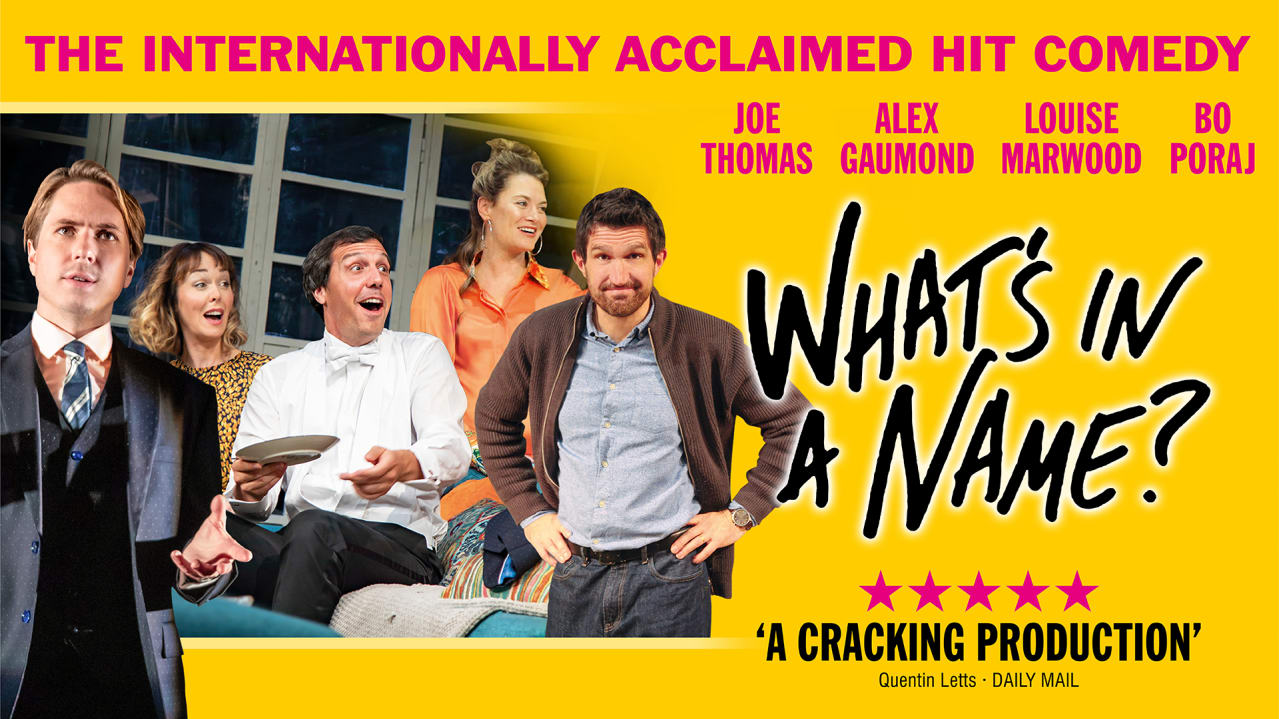 Review: What’s in a Name

Written by Frankie Rhodes
MA Shakespeare Studies student - proponent of ethical fashion and lover of theatre.
Published at 10:30 on 13 March 2020

In 2020, we live in a cancel culture- where if something, or someone, is deemed corrupt, we bandwagon on their vilification, and effectively “cancel” them from society. This is what happens when arrogant, quick-witted Vincent suggests the proposed name for this future child at a dinner party with his sister Elizabeth, and her husband Peter. Also present is eccentric childhood friend Carl, and Anna, Vincent’s glamorous, heavily pregnant wife. What ensues is a hilarious, grippingly awkward evening as the group argue about what it means to have a name, what it means to hold certain viewpoints, and ultimately- what it means to be a family.

Adapted from the highly successful play ‘Le Prenom’ by Matthieu Delaporte, this production shifts the setting from Paris to Peckham, focusing on a group of champagne socialists as they begin to enter parenthood. The scenery reflects this rustic-but-expensive atmosphere, depicting a sitting room with exposed brick walls, a plush sofa, and enormous bookshelf, with stairs leading up to a second level. All action takes place within this space, becoming increasingly claustrophobic as secrets and judgements are revealed.

The play opens with Vincent entering the room, addressing the audience directly as a kind of narrator, who continues to “break the fourth wall” during several moments in the play. He is established immediately as the star of the production, with Joe Thomas offering something refreshingly distinct from his iconic character of Simon in The Inbetweeners. With his cockney accent, laddish body language and ability to hold the audience with just a facial expression, Thomas provided much of the humour in the play.

During Vincent’s opening narration, Peter and Elizabeth rush around the house preparing dinner, as a precursor to their generally hectic lifestyle, which is revealed further as the action ensues. Bo Poraj as Peter is antagonistic, pedantic and somewhat snobby, defending the use of language throughout the play in a Wittgenstein-esque manner. Lumped together with this hopeless husband and father, Elizabeth is reduced to indignation, but finds an important voice by the end of the production.

In fact, this is a production where the women are as headstrong as the men are pathetic, with Anna impressively rebuking her self-righteous husband. The extensive arguing comes down to an egotistical battle between Peter and Vincent. In a style reminiscent of Edward Albee’s ‘Who’s Afraid of Virginia Woolf’, the pair constantly try to surpass each other in argument and perspective, leading to an atmosphere of awkward chaos. One exception to this, perhaps, is the character of Carl, who spends most of the first act haplessly gawping between the two men. Whilst his significance is initially unclear, he is fleshed out gradually, resulting in a performance from Alex Gaumond that is incredibly comic.

Whilst the majority of the one-liners and more developed jokes landed well, one of the storylines related to a character who was not depicted on stage, distancing the audience from this area of humour. The production also risked gearing up to an absurd, decontextualized level of chaos, but this was avoided for the most part through the convincing depiction of the characters. It felt like witnessing a real family dinner party, albeit exaggerated for theatrical purposes, but with the same sense of ridiculous small-talk and gossip.

The production also managed to stay relevant with subtle references to current politics, without becoming more didactic than comic. On the occasions where characters did attempt to take an overtly serious angle, such as Peter claiming that Vincent’s name for his child would connote ‘an openly fascist act’, this was simply met with more laughter from the audience. It has been a while since I have laughed so much at the theatre, and I urge anyone to see this for an evening of escapism, that nonetheless reveals home truths that we can all recognise within our family networks.