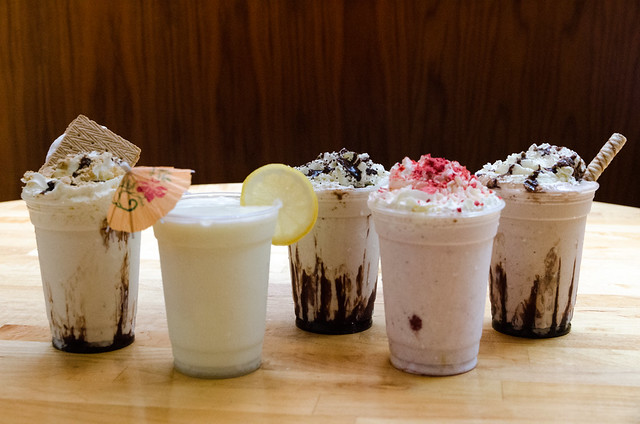 Written by Dominic Staniforth
Published at 06:00 on 12 June 2019
Images by Kurman Communications , Inc.

Throwing a milkshake on a politician is not a serious act of political violence. Recently, the act was carried out to symbolise the unwillingness of the public to allow intolerance within our society. Political figures that appeal to democracy in order to legitimise intolerant views, gain support for violent policies and actions, should be ridiculed in sight of the public eye. However, is throwing a milkshake at them an acceptable way to do so?

Nigel Farage was hit by a milkshake on Monday 20th of May whilst campaigning in Newcastle. Stephen Yaxley-Lennon (known as Tommy Robinson), and Carl Benjamin were also hit by milkshakes, making the total to four milkshakes thrown at right-wing candidates within a week. The series of events bring up an important issue within politics: is the public humiliation of political figures anti-democratic, and should we condemn those who throw milkshakes at politicians?

Farage himself tweeted after the event that ‘some remainers have become radicalised’ and that ‘normal campaigning is becoming impossible.’ These ‘radical’ actions seemed to have had adverse political effects. It could be argued that the ‘milkshaking’ of Brexit advocates has simply armed Farage and other leaders with evidence of the intolerance of remain voters.

This can be further seen in the recent ‘milkshaking’ of Don McNaughton, an 81-year-old Brexit Party supporter. Clearly throwing a milkshake on someone with opposing views is at the least bad optics for your political cause. And in this sense, the act itself can be seen as a bad political tactic which is unlikely to gain your cause support.

However, it would be naïve to say that milkshaking is an attempt to win anybody over. Paul Crowther, the man who threw milkshake over Farage, claimed he had been looking forward to the milkshake, but thought ‘it went on a better purpose.’ Impactful public discourse surrounding Brexit has long since been abandoned, so it would seem milkshaking is at best an attempt to temporarily humiliate leading figureheads of the Brexit cause.

Furthermore, the act of throwing a milkshake is a level of violence that cannot be equated to the violence typically associated with the far right of politics. Robinson was jailed in May last year for filming and broadcasting live defendants involved in a criminal trial. Robinson filmed a defendant and told viewers to ‘Harass him, find him, go knock on his door, follow him, see where he works.’ Carl Benjamin, on the other hand, posted a video online claiming he ‘wouldn’t even rape’ Labour MP Jess Phillips, and that ‘with enough pressure I might cave.’ Benjamin’s comments had real world consequences, as Phillips revealed ‘I do fear for my mental health actually’ in an interview with Birmingham Mail. Finally, Farage himself, whilst talking at an event in Southampton on the 14th of May 2017, claimed he would be ‘forced to don khaki, pick up a rifle and head for the front lines’ if the government didn’t deliver Brexit. Clearly, the issue of Brexit has brought further toxicity to British politics, and the emergence of milkshaking, good or bad, is a clear indication of that.

To call a milkshake being thrown on a politician as an act of political violence is to forget the history of political humiliation. In 2009 BNP leader Nick Griffin was hit by an egg during a news conference , and in March this year Jeremy Corbyn was egged. As members of public interest and political importance, it does not seem excessive to ask politicians to recognise that their actions, promises, and views have political and real-world consequences. I would argue that throwing a milkshake at a politician is not a dangerous, serious, or significantly violent act.

Ultimately the act of throwing a milkshake at a politician should be justified to the extent at which the targeted politician holds, presents, and acts on intolerant views. The paradox of tolerance theory defined by Karl Popper in 1945 states that ‘in order to maintain a tolerant society, the society must be intolerant of intolerance.’ It is up to the public to decide whether the views, policies, and acts of politicians such as Farage, Robinson, and Benjamin are dangerous enough to justify dousing them in milkshake. However, whilst milkshaking is not a relatively serious action of political violence, due to the principles of civil democracy, we should seriously consider whether the act is necessary according to the situation.