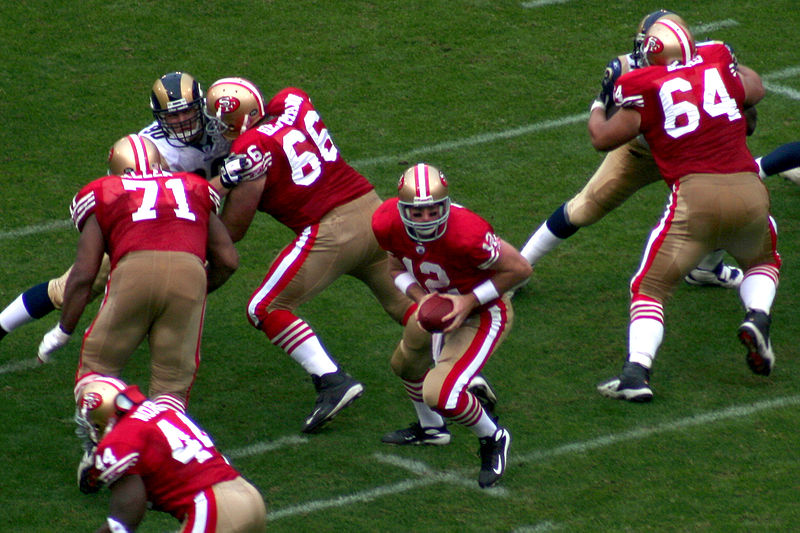 Written by Jake Davies
Published at 17:30 on 18 February 2020
Images by John Martinez Pavliga

Having come to San Francisco to study for my year abroad, it was thrilling to watch San Francisco 49ers as they progressed to their first Super Bowl since 2013. The city was beyond excited come game day, with flags dangling from windows and buses proudly displaying “Come On 49ers!” in the week building up to the big game. Unfortunately, the Bay Area team were unable to obtain what would have been their sixth Super Bowl title, as the Kansas City Chiefs staged a late rally to overturn a 10 point deficit and win 31-20 last Sunday.

It was a game billed as being one of the closest Super Bowl contests in recent memory and whilst it wasn’t an instant classic, nobody can deny that Super Bowl LIV was a hard-fought battle. The 49ers kicked off the scoring with a field goal in the first quarter, only to be set back by Chief’s quarterback Patrick Mahomes, who danced through a gap in 49ers defence to score the first touchdown of the match in the dying seconds of the first quarter. The Northern Californian side fought back in the second quarter thanks to the efforts of their own quarterback Jimmy Garoppolo, who set up Kyle Juszczyk for the touchdown with five minutes to spare. This meant that the Super Bowl was tied at halftime for just the fourth time in the competition’s history, 10-10.

San Francisco reclaimed the lead once more with three minutes on the clock in the third quarter, as running back Raheem Mostert squeezed through a swarm of Chiefs players into the end zone. The Californian coastal city was buzzing in anticipation for the final quarter, with their side entering the period 20-10 up and looking strong. They maintained this momentum for half of the quarter, before Mahomes proved why he is one of the hottest young prospects in the NFL right now. The young quarterback assisted both Travis Kelce and Damien Williams in the space of three minutes, to reclaim the lead for Chiefs going into the closing minutes of the game. 49ers were clearly rocked by this late turnaround, and were dispossessed by rampant Chiefs, allowing Williams to secure victory for the Missouri based side by running the pitch and scoring his second touchdown of the game with one minute to spare.

The epic finale meant that Kansas City Chiefs emerged victorious 31-20, winning their first Super Bowl in 50 years. History was also made in the form of Mahomes, who at just 24 years old became the youngest ever player to be named Super Bowl MVP. His performance throughout the game, particularly in the final quarter, was electrifying and his lethal throws proved too much for the weary 49ers.

For the San Francisco franchise, the crushing defeat means that the 25-year wait to win another Super Bowl continues. The sense of disappointment in the city was palpable following the game, as the feverish excitement was replaced by nostalgic reflection on a brilliant season which just couldn’t cross the final hurdle. Kansas City were deserving winners though ultimately and head coach Andy Reid defied expectations by building a team which fought for each other to the very last and made their mark in football history as champions of the 54th Super Bowl.