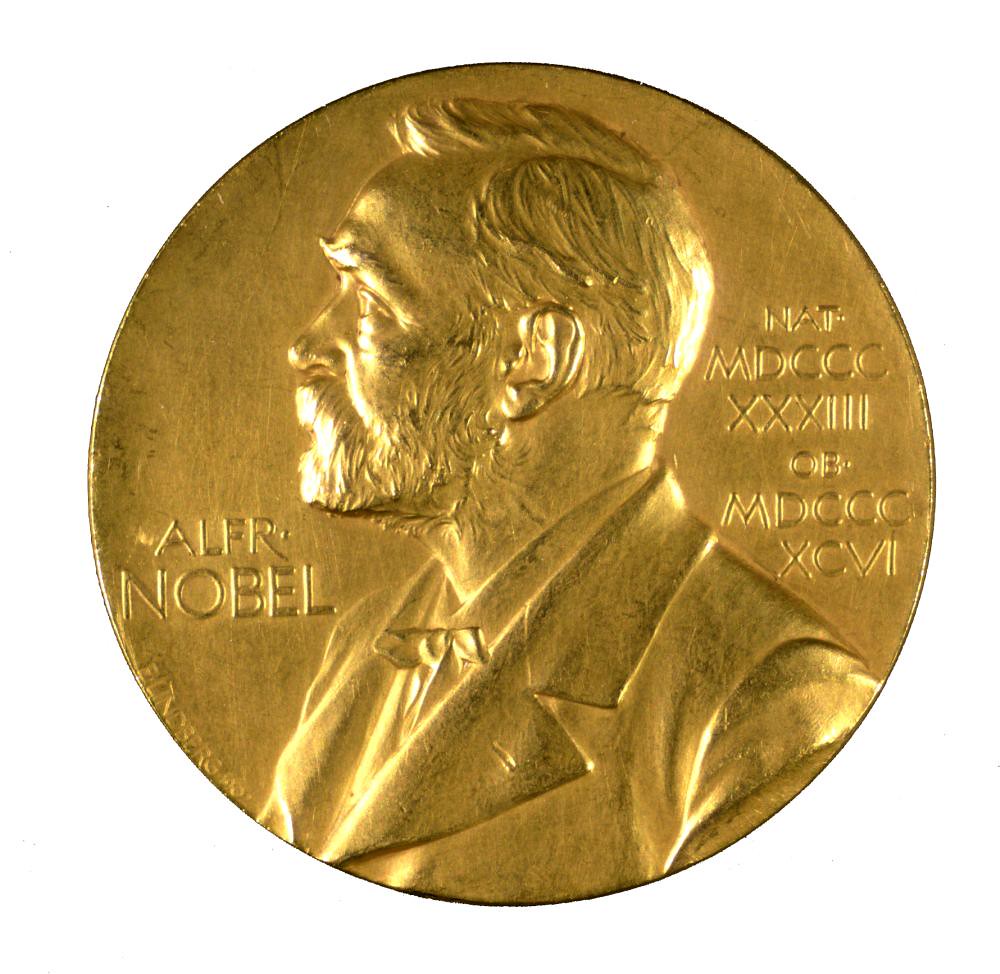 The Biographies of Nobel Prize Winners

These mini biographies are of the four most recent Nobel Winners affiliated with the University of Birmingham (UoB). They have been researched from the official Nobel Prize biographies and other professional profiles.

In describing their time in Birmingham, very human portraits emerge from struggles with multiple sclerosis, treating one wife’s breast cancer, depression and barriers to University admission.

The Nobel Laureates showed different combinations of ability, hard work, tenacity and luck. The Nobel Prizes were not a certainty, as awarding modern Nobel Prizes is a fickle affair with dozens of worthy candidates. Some experienced problems with the University administration, and one occupied their offices.

The one discernible common element was a strong internal need to understand what they observed and the freedom to explore this. Where did this drive come from? Possibly from dismantling engines when he was young for one. Another experienced a general intellectual blossoming from their time at University. Yet another thrived from a working partnership with a Professor.

All the Laureates are more colourful and better understood when their entire personalities are considered, rather than making do with abstracted figures of achievement on a Nobel pedestal.

Fraser Stoddart was brought up on a Scottish farm near Edinburgh. His father had been an agricultural lecturer, his mother a hotel manager. He loved puzzles, Meccano sets and reassembling vehicle engines. Being the only boy in primary school, he learned to knit stockings particularly well. Through his friendships with the farmhands he learnt to swear from an early age. He was a shy little boy, a trait that took him more than three decades to overcome.

He obtained an upper second class Chemistry degree and a PhD at Edinburgh University.  Becoming a Research Fellow in ICI at Sheffield University, he wrote that people were nasty in his early years, and so competitive and so unpleasant to each other and to the students. After a few years, he became a Chemistry Lecturer at Sheffield, and was more confident in dealing with departmental politics and asserting himself.

He was approached in 1990 by the Vice-Chancellor of  UoB, Sir Michael Thompson, which resulted in him moving to Birmingham as Head of Department and Professor of Organic Chemistry. The Department of Chemistry was in a badly run-down state and morale was low. New NMR and mass spectrometry facilities were installed and the 7th floor refurbished. As far as research was concerned, his seven years at Birmingham exceeded his wildest dreams.

His impression that his wife was not receiving the best breast cancer care in Birmingham led to Stoddart accepting a post at UCLA in 1997. He made his final move to Northwestern University in 2008 which had dedicated laboratories.

He always felt that allowing interactions between teams without meddling or interference was an extremely effective dynamic for high quality research. This was by and large, lost on university administrators and the regulatory authorities, who prefer research being performed in silos. He believed that rules needed to be broken to be successful in life.

Thouless’ mother and father were both lecturers. He won a scholarship at Winchester College and enjoyed the emphasis on private study and assignments, with less than eighteen hours a week teaching.

He studied Natural Sciences at the small Trinity Hall College in Cambridge which suited his introverted personality, and he completed his PhD at Cornell University.

Thouless then moved to the Department of Mathematical Physics at UoB for two years of postdoctoral research. Thouless spent the summers of 1960 and 1961 at the Niels Bohr Institute and Nordita in Copenhagen. This helped his parlous financial state in supporting a family on a British postdoctoral salary.

After another four years at Cambridge, Thouless returned to Birmingham as professor of physics. This was a welcome change as he had frequently suffered from respiratory illnesses, which improved after buying a centrally heated house in Birmingham in 1966. One colleague said that others were terrified of him as he did not suffer fools gladly.

Around 1970 at UoB, Thouless, who had broad ideas, started working with Kosterlitz who would find the holes and solutions in Thouless’ arguments. His family had a Bedford Dormobile for holidaying, including travel to Europe, which at times coincided with conferences he wanted to go to.

Thouless did not leave the UK for money in 1979, but because of difficulties with the university administration. The new Vice-Chancellor, Robert Hunter, asked Thouless in 1969 what he would be doing next. Thouless gave the true but impolitic answer that he did not have any definite plans. This led to an ongoing saga which resulted in the Vice-Chancellor eventually telling Thouless that if he had a chance to leave the University he should do so.

There were no theoretical physics chairs open in the UK, so Thouless went to the University of Washington, Seattle in 1980, much as he wanted to stay in the UK. On his arrival, he was awarded a subject specific grant at Seattle, but he also wrote he might investigate a different topic if it was more interesting. He remained happily at Seattle for the rest of his career.

Kosterlitz was born in Aberdeen, with his father and mother, of a Jewish background, having escaped Germany in 1934. His medical doctor father accepted a teaching position at Aberdeen University.

At school, his ability to make logical deductions compensated for his unreliable memory. He enjoyed the freedom in the laboratory, although he caused it to be evacuated a few times. He realised he had a disability in being red green blind.

He then studied at Cambridge and became obsessed with rock climbing. He finished with an upper second. After a PhD in Oxford, he went to Turin for two years as it was close to the Alps. In his twenties, he was one of the best climbers in Britain and considered giving up physics for a professional climbing career.

He failed to submit an application to CERN in time whilst in Italy, panicked, and bought the British newspaper advertising academic jobs. Consequently, he was offered a three-year postdoctoral position at UoB although he did not really want to go there for high energy physics.

After frustrations in his own academic field, he grew closer to Thouless at UoB and started to work with him and with patience they became friendly. He next went to Cornell in 1973/74, arranged by Thouless.

Returning in 1974 as a tenured lecturer, he was promoted to Reader in 1980. He remembered the singular exhilaration of his 1977 paper with Thouless, when theory agreed with experiment.

He then contracted the autoimmune disease multiple sclerosis, resulting in several years of depression which affected his physics productivity. After attacks every 18 months or so, at 55 he received a new very successful drug.

He received a full Professor offer from Brown University, and UoB made a counter-offer of a research Professor, but then abruptly withdrew the offer. He therefore left for America in 1982, where he has stayed.

Nurse was born in Norfolk, where his parents worked in big houses, his mother a cook, his father a handyman. To get to primary school, he had a long walk where he  observed the animals, insects and plants and how they changed during the seasons, which made a lasting impression on him.

At school he was not good at exams and there wasn’t enough time to follow up his interests. His Biology teacher let pupils do experiments and he enjoyed investigating the pigments of different mutant fruit flies.

He applied to several universities, but without a pass in a foreign language, he instead  worked as a technician in a Guinness laboratory. However, Professor Jinks at the UoB Genetics Department came across his application, gave him an extensive interview and arranged for his language failure to be overlooked. He began his Biology degree in 1967.

He met his wife, a sociology student, at UoB and her influence and student movement activities got him interested in theatre, art, music, politics and philosophy. He became gripped by intellectual pursuits and realised this was the direction he wanted to go in. Nurse sold Socialist Worker and participated in an occupation of the Vice-Chancellor’s office. Birmingham turned him into a general biologist and he invariably took a biological approach to research projects.

After UoB he moved to Edinburgh University for six pivotal years of his research career, where he discovered a key feature of cell development. After Edinburgh, Nurse moved to Sussex University, then the Cancer Research Foundation, Oxford University, Rockefeller University and finally the Crick Institute in London as Director.

He believes science research is an international activity, breaking down barriers between the peoples of the world. Nurse has also said that good scientists must have passion and a set of attitudes including mental honesty, self-criticism, open-mindedness and scepticism.