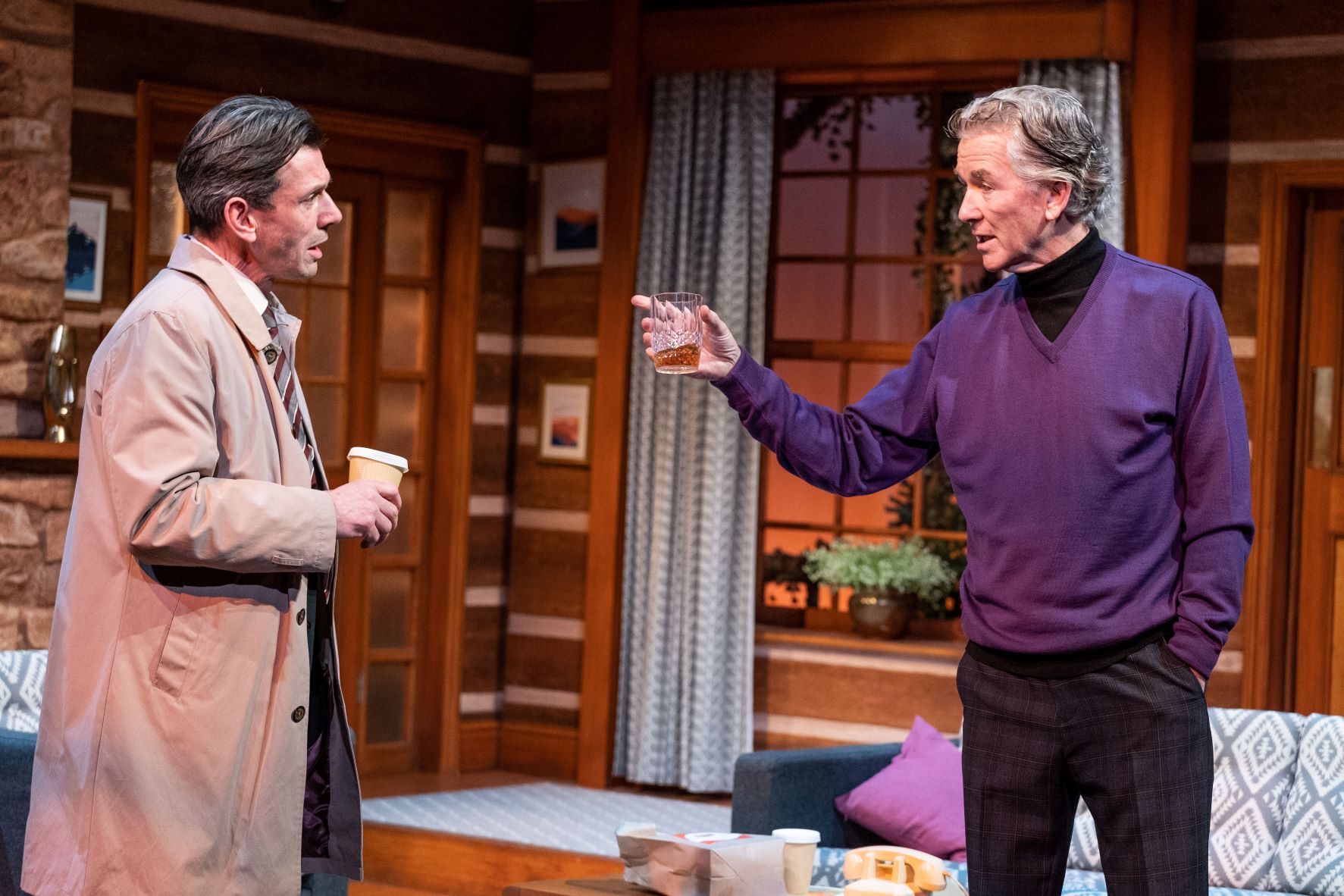 Culture Writer Charis Gambon praises the Alexandra’s Catch Me If You Can, finding it a hilarious thriller which will keep you guessing until the very end!

Written by charisGambon
Published at 15:00 on 27 April 2022
Images by Jack Merriman - The Alexandra Press Images

On 25th April I went to see the theatre piece Catch Me If You Can at the Alexandra Theatre. I enjoyed watching the performance. I believe that having no preconceived ideas about what the show would be like worked in my favour as it helped me to relax and enjoy the show as it was happening. As the show is a classic thriller being able to immerse yourself within the piece certainly will help you.

The show is set in a cosy log cabin in the remote Catskills mountains and the set design by Julie Godfrey is absolutely phenomenal. It is not hard to imagine that you are truly in the Catskills with her outstanding set. Every part of the performance happens in the log cabin, while watching you will find yourself admiring the set and there will always be a new detail for you to find. The doors in the cabin truly open which add depth to the set and enhances the feel that it is a real cabin.

Catch Me If You Can is centred around the sudden disappearance of newlywed Elizabeth Corban which occurred while she was on her honeymoon with her new husband Daniel Corban. The central characters in the piece are Daniel acted by Patrick Duffy, the fake Elizabeth acted by Linda Purl, inspector Levine acted by Gary O’Brien and Father Kelleher acted by Ben Nealon. These four characters are the most integral to the plot.  Additionally, the secondary characters are Sidney acted by Hugh Futcher, Everett Parker acted by Paul Lavers and Mrs Parker acted by Chloe Zeitounian.  The secondary characters are used to drive the plot forward and to add confusion to the mix.

The play begins with Daniel pleading for Inspector Levine to find any leads or information on his wife Elizabeth. The start appears to be very simple but if you believe the play will be simple you would be absolutely wrong.  Linda Purl is introduced to the audience as Elizabeth very quickly and straight away we experience Daniel proclaiming that she is not Elizabeth. This appearance begins the mysterious events of the production and as the story plays out you are left intrigued and occasionally confused.  Just when you think you have worked out the murder mystery you will almost certainly prove to be wrong.

Catch Me If You Can is a thriller and a murder mystery certainly, but it does not follow in the footsteps of the traditional whodunnit murder mysteries.  The performance is filled with red herrings and twists and due to this, you will never become bored. You do not know who to trust throughout the performance and scenarios that play out throughout will led you to change your allegiances.  The piece that starts off feeling calm and cosy and straightforward, develops over time into a heated and suffocating atmosphere. You will watch as Daniel seemingly loses his mind as the play develops as his confusion and instances in which he realises that she is not his wife grows.  The performance manages to keep you hooked throughout the whole show.

The play is also incredibly funny, you will find yourself laughing practically straight away upon the start of the performance.  What makes the piece so funny and special is that all of the humour is accessible.

The second act is where things really begin to become interesting. The twists and turns are seriously ramped up during this act and the surprising twists and turns draw to a conclusion in an end that you will almost certainly not see coming.

Theatre Review: The Curious Incident of the Dog in the Night-time