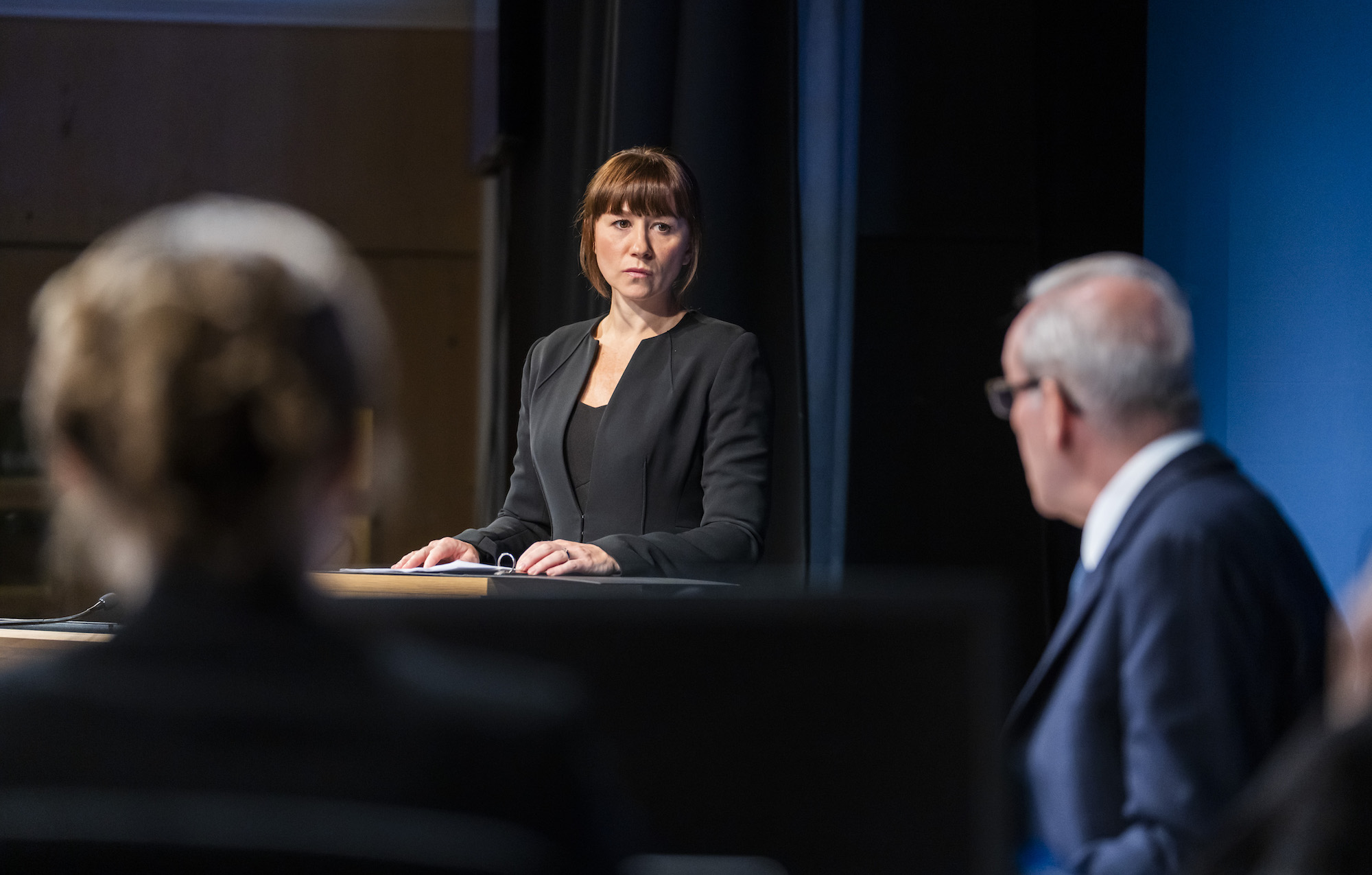 Written by DaniellaSouthin
Published at 11:00 on 1 December 2021
Images by The Rep Press Images

‘The least valuable thing was people’s lives.’ This is how Yvette Williams, a representative for Justice for Grenfell, described the Grenfell Tower disaster. The public inquiry of the tragedy is depicted in Value Engineering: Scenes from the Grenfell Inquiry, a verbatim play directed and produced by Nicolas Kent. It is a much-needed insight into the journey to justice those affected by the fire deserve, a showcase of how money and power took precedence over human life.

Solely using language and evidence from the inquiry itself and a plain stage of office desks and chairs, the play revealed the tragic truth behind the massacre; that 72 people died because Grenfell did not fit the aesthetic. Considered the ‘poor cousin’ of the newly erected school beside it, Grenfell underwent a refurbishment that covered non-combustible concrete with combustible cladding. But this desire to reform Grenfell into somewhere deemed worthy of the middle-class community surrounding the tower block, came at a cost, one that the richest borough in London was not willing to pay. Throughout the play, it becomes apparent that safe cladding was swapped for a cheaper, flammable substitute but in saving money, the price was paid in lives.

The tragedy of this choice is particularly prevalent in firefighter David Badillo’s, played by Daniel Belts, testimony where he describes seeing the building burning on the outside as he looked out of an upper floor window. It was a fire like none he had seen in his 20 years of service. Within the scene, videos of Grenfell burning were played on a screen above the stage. With Grenfell alight, the cladding could be seen falling from above like fiery rain, but instead of nourishing life, this rain wreaked havoc, it took lives.

The focus of this play, though, is not the incident itself but the decisions, the mindless choices that led to the disaster. From project manager Ben Bailey, son of Ray Bailey, the owner of Harley Curtain Wall who undertook the construction work having never had training in fire safety, to John Hoban, the council’s Senior Building Control Officer’s excuse that he simply did not ‘spot’ the errors in the refurbishment plans. This play showcases how the decisions made and inadequacies of those involved meant roughly 600 people were housed in the unsafe building.

Yet, all the accused attempted to dodge responsibility, blaming this company, or that boss for their errors. Particularly notable was Phil Langhorne’s portrayal of Simon Lawrence, the Contract Manager of Rydon, the company overseeing the construction work on Grenfell. His claims that he did not know the technical parts of cladding materials or fire safety led one member of the audience to mutter ‘liar’ and others to scoff in disbelief. In just two and a half hours, a snippet of the four-year-long trial the play made evident the injustice and laid bare the actions of those to blame.

Despite the length of these trials and the injustice the affected are still facing, Williams still believes nothing has changed. In a post-production panel discussion, Williams explained how the voices of those living in unsafe social housing are not heard, shaking her head when asked she thinks the inquiries have made a difference.

This lack of voice is given centre stage in the closing scene of the play when the theatre, which otherwise was lit, is engulfed in darkness, a single spotlight on David Robb playing Michael Mansfield QC – a BSR barrister. Detailing a letter written by a Grenfell resident, the speech described how residents felt the tower block was a ticking time bomb waiting to turn a small fire into an inferno, a tragic foreshadowing of the truth.

Already moving, the scene became breath-taking by the appearance of the victims’ names on the screen above at the speech’s close. The theatre stayed quiet as everyone sat mourning. At that moment, people’s lives were the most valuable thing.

Grenfell Two Years On: Why Politicians are Still Playing the Blame Game