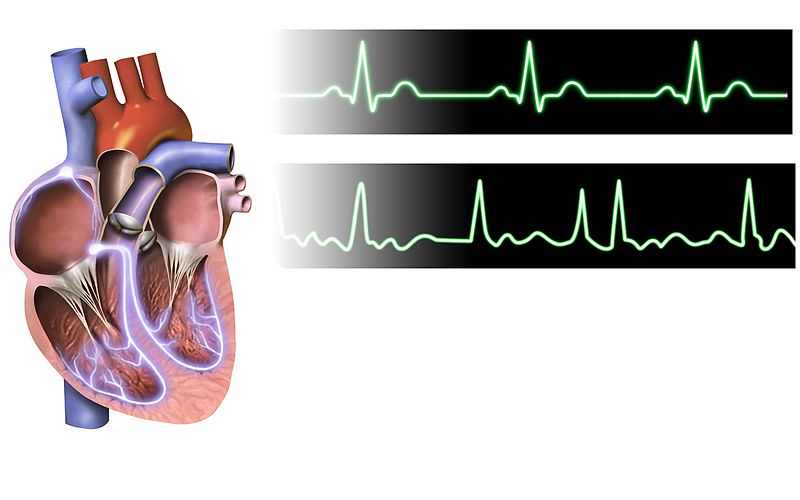 Total A-fib of the Heart

Affecting around 1.6 million people in the UK, atrial fibrillation (AF) is the most common abnormal heart rhythm and can increase the risk of strokes and heart failure. Characterised by a fast and irregular heartbeat, it is usually diagnosed by monitoring the heart via an electrocardiogram (ECG). However, this is only effective if an episode of atrial fibrillation occurs during the 5 minute ECG, meaning that patients may need to wear a portable ECG recorder over a long period of time for the rhythm to be spotted. The condition often goes undiagnosed, only being spotted after it leads to a stroke. Now, researchers at the University of Birmingham have discovered two biomarkers in the blood that could also be used to diagnose the condition, alongside three clinical risk factors to look for.

The study was carried out on blood samples from 638 patients referred to the Sandwell and West Birmingham Hospitals NHS Trust, who either had AF or risk factors for an AF-related stroke. Out of 92 proteins screened for, 40 were found in common in all samples. Seven clinical risk factors were also considered (age, sex, hypertension, heart failure, history of stroke or transient ischaemic attack, kidney function, and BMI). Machine learning algorithms utilising the R programming language were used to analyse the data from the study.

The analysis of the data revealed that male sex, older age, and higher BMI were the risk factors most strongly associated with AF. Two proteins in the blood were also highlighted as biomarkers to identify AF: brain natriuretic peptide (BNP) and fibroblast growth factor-23 (FGF-23). BNP is secreted by the heart in response to increased pressure and strain, and is already widely used as a biomarker for AF. However, FGF-23 as a biomarker is a new discovery. This protein is secreted by bone cells, and acts on the kidneys to regulate phosphate levels. It is also associated with cardiac hypertrophy and vascular stiffness, possibly explaining the link to AF. The study was published in the European Heart Journal on the 7th of January 2019.

Going forward, these biomarkers and risk factors could be extremely useful in screening patients for atrial fibrillation. Instead of the condition going unnoticed or requiring an inconvenient ECG, a blood test could be used instead to identify patients at risk and direct them towards treatment before it is too late.