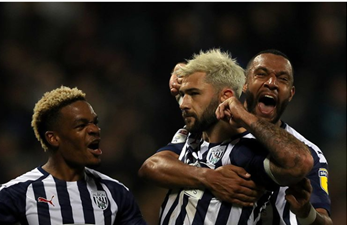 A late Charlie Austin penalty secured a vital three points for West Brom against Sheffield Wednesday, as the Baggies continue their bid for promotion

Written by Harry Shersby-Wignall
Published at 17:30 on 7 December 2019
Images by instagram/wba

A late Charlie Austin penalty secured a vital three points for West Brom against Sheffield Wednesday at the Hawthorns, as the Baggies continue their bid for promotion.

Both teams launched early attacks, with Hal Robson-Kanu heading over from close range for the hosts, whilst Wednesday striker Steven Fletcher was inches away from connecting with Kadeem Harris’ low cross. The first ten minutes saw end-to-end action in a typically thrilling Championship encounter, Fletcher going close again for the visitors, this time denied by a stubborn Sam Johnstone. West Brom’s on-loan midfielder, Filip Krovinovic then tried his luck from distance on the counter-attack but saw his effort fly wide.

Amidst the frantic start, it was the Baggies who drew first blood. Matheus Pereira, one of the league’s outstanding performers this season slid Robson-Kanu through on goal with an inch-perfect pass. The latter coolly slotted the ball under Wednesday’s Kieron Westwood to give the hosts the lead. The Welshman’s goal proved to steady the half as both sides were limited to barely half chances as Kyle Bartley and Ahmed Hegazi remained resolute in the heart of the Baggies defence.

Wednesday manager and former Birmingham City boss Garry Monk seemed to inspire his so-far lacklustre side at half-time as they raced out of the blocks, pinning the Albion defence back with several. Ultimately, the Baggies’ resolve came to an end however after Krovinovic was adjudged to haul Kieran Lee down inside the box as the referee pointed to the spot. Fletcher, once of Albion’s rivals Wolves, stepped up to coolly to convert the penalty, sending the 1,982 away supporters into delirium.

The goal sparked the game back into life, with Robson-Kanu almost immediately re-gaining the lead as he saw his toe-poke towards goal fly just wide. At the other end, Morgan Fox saw his header hit the crossbar from a Barry Bannan free-kick, much to Wednesday’s agony.

This fiery duel was still not over, however. Substitute Charlie Austin made an instant impact, getting in between two defenders before seeing his header ricochet off the post. With two minutes to go, there would be one last chance. Pereira looked destined to score after bringing the ball into the box, but was tripped by Westwood and the referee showed no hesitation in giving a penalty. Austin, who has encountered a shaky start to life in the Midlands, fired the penalty home, securing a hard-fought three points to retain top spot in the Championship for the Baggies. Wednesday defender, Liam Palmer was shown a straight red in injury time for a reckless challenge on Grady Diangana.

After the match, Albion boss, Slaven Bilic was delighted that his side withstood a physical Sheffield Wednesday outfit. He also highlighted the impact of playmakers, Pereira and Krovinovic – both loanees from Sporting Lisbon and Benfica respectively.

Wednesday manager Monk was a frustrated figure post-match as he believed his side deserved to take three points after their dominant second-half display. He reluctantly admitted both the red card decision and West Brom’s penalty were the correct verdicts.