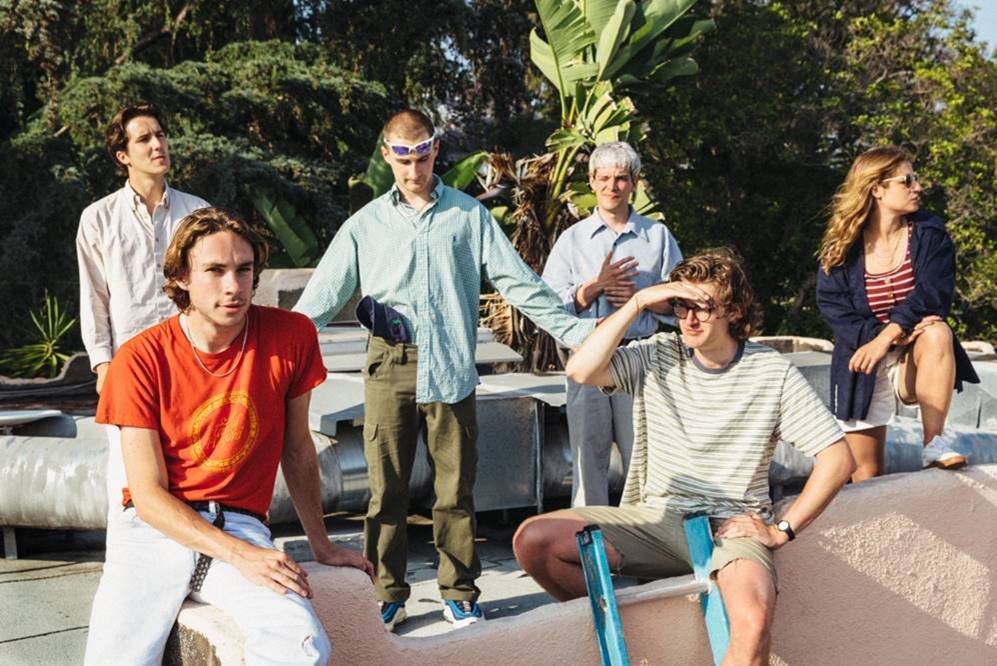 A Beginner’s Guide to: Sports Team

At the time of writing, Sports Team, a band with just over 300,000 monthly listeners on Spotify, are winning the race for this week’s UK number one album. If successful, they will knock Lady Gaga and her 50.1 million monthly listeners off the top spot and become the first group in four years to hit number one with their debut LP. Ultimately, Sports Team may or may not come out on top, yet the fact that the Cambridge sextet are even in the running proves that this group deserve your attention. Over the past four years Sports Team have already built up a passionate fanbase through their fantastic blend of punk infused indie rock served with a side of thoroughly entertaining satire. To demonstrate why they deserve a place on your playlist, here are four songs to introduce you to one of the UK’s most exciting up and coming bands.

This early 2019 single is the perfect introduction to Sports Team. The track’s teasing two verse build up is brilliantly juxtaposed by the explosive chorus, which happens to feature the best hook the band have ever written. It also helps that the track is outstandingly produced, with the song transitioning effortlessly between the quiet/loud dynamic. Furthermore, the powerful guitars on the chorus breathe life into ‘M5’ like an adrenaline shot, pouring an infectious and electrifying energy into the song that, coupled with the ‘Sunlight splashing off the bonnet’ refrain, makes the track an instant earworm. In terms of narrative, the song follows the journey of a typical driver on the M5 motorway, and is drenched in Sports Team’s now signature brand of sarcasm and dry humor, particularly in the bridge when the driver ends up failing to ‘notice a mini roundabout.’ I’ll let you find out for yourself what happens next. This was one of the best songs of 2019, and although the decision to leave it off the album was a disappointing one, it still remains the Sports Team track I find myself coming back to most.

At least this one made the album. Fuzzy guitars and chiming keys guide the instrumental on ‘Fishing,’ creating an upbeat sound that, like ‘M5,’ you’ll find yourself humming later on. Interestingly, the lyrical themes of the track don’t seem to match the buoyant instrumental, as the verses of ‘Fishing’ appear retrospective in nature as frontman Alex Rice sings ‘You used to talk all the time and now we don’t anymore/ Guess we don’t have the time/ It doesn’t work anymore.’ How this quite fits in with the chorus’ description of going fishing in the Thames is admittedly rather puzzling, although it should be noted that the song was originally written by The 1975’s Matty Healy, who has built a reputation for penning some pretty heavily veiled lyrics over the years. Whether the song is really about an old flame or just an innocent spot of fishing, the track nonetheless remains a standout one in Sports Team’s small yet already impressive discography.

‘Here’s The Thing’ is witty social commentary done right. As described by Genius, the single ‘pokes fun at the 21st century falsities society and parents provide.’ Each and every verse delivers a delightful dose of sarcasm, which is complemented brilliantly by Alex’s deliberately over-exaggerated vocals which increase in hysteria as the song progresses. The track basks in this vibrant maniacal energy, not only created by the fast-paced instrumental, but also by the very contents of the song itself. It seems as though these painfully simplistic anecdotes often shared by the older generation, such as ‘The world will be okay if we stop taking flights,’ are slowly taking their toll on the group. Each verse and each unhelpful oversimplification (e.g. ‘if you work a little harder you’ll get by’) works to compound this sense of agitation and delirium, which is evidenced brilliantly by Alex’s maniacal cackle upon the song’s eruptive climax. Of course, it could be argued that the band trying to criticize the unhelpful idioms of the older generation by merely reciting them back to the listener under a sheen of sarcasm is just as unhelpful, but Sports Team cleverly counter such a critique with the line ‘Hey ma I wrote a song now everything’s alright,’ resulting in a clever and refreshing moment of self-awareness. To put it simply, ‘Here’s The Thing’ is a fantastically layered and thoughtful song, that also happens to be overwhelmingly enjoyable to listen to.

Released as Sports Team’s debut single back in 2017, and appearing on the Winter Nets EP which followed the year after, ‘Stanton’ probably isn’t the best place to start if you are new to the group. The track is far from perfect, and is let down by some pretty rough production and mixing, but if you enjoyed the other songs mentioned above, then I would be surprised if ‘Stanton’ didn’t also work its charm on you. The track is a fan favorite and is often played as the group’s final song during live performances, and it’s clear to see why. The first two thirds of the song are spent building towards a highly energetic climax which, judging from live videos, translates excellently to a live setting. It’s a shame that the track’s production holds it back such a great extent, with the guitars and drums never really exploding with a huge deal of force, but for an early release on a limited budget, ‘Stanton’ is a track that, despite its rough edges, is still one of Sports Team’s most enjoyable. A re-recording with their current budget would be more than welcome, but for now, ‘Stanton’ is definitely worth checking out, especially to see just how much the group have already progressed sonically since their inception.

A Beginner’s Guide to: Nile Marr
Album Review: Run The Jewels – RTJ4
‘Decades’ On, It Still Has ‘Heart and Soul’: A Retrospective on Joy Division’s Last Ever Gig