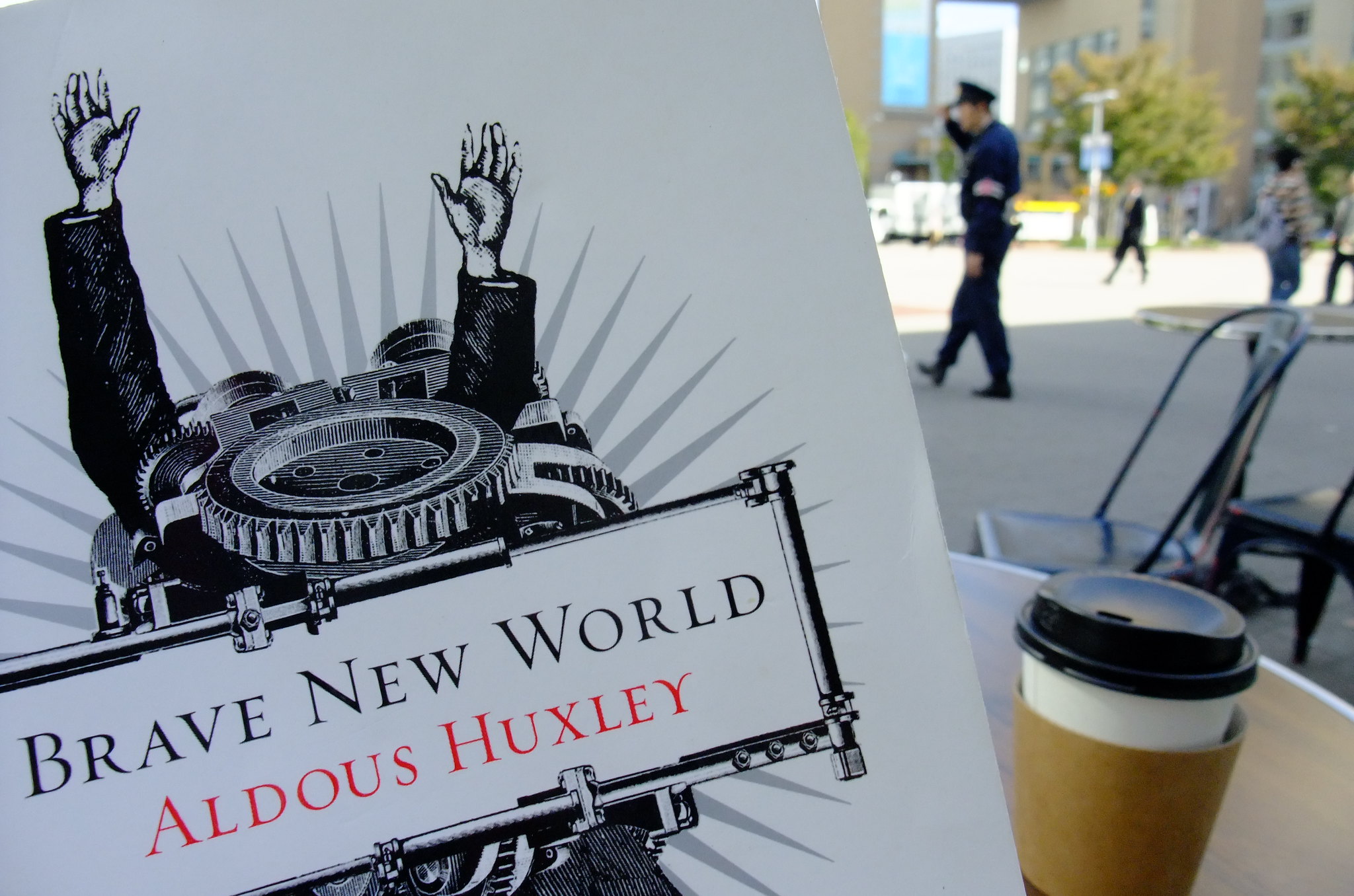 Written by Antonio Miguel Aguila
English and Film student with a love of literature and cinema.
Published at 10:30 on 28 July 2020
Images by James

Imagine dystopia and utopia existing simultaneously, that is Aldous Huxley’s Brave New World. Along with the likes of George Orwell’s 1984 and Margaret Atwood’s The Handmaid’s Tale, Huxley’s novel is one of the great works that defined modern dystopia. Although mainstream, young adult dystopias like Divergent and Hunger Games, are not quite to the same standard, the same sentiment carries forth – justice. Soon, Brave New World’s adaptation will premiere on NBC, which is exciting because this and the success of the recently televised The Handmaid’s Tale may mean a return of dystopia’s origins. However, one might ask exactly what are dystopia’s origins? Thus, we rewind to the original novel.

Adaptations are great, but they tend not to pay true homage, nor properly re-format the original story. Regardless, as other readers will know, intensely criticising the adaptation whilst also shyly adoring it makes the experience. Written way back in 1932, Brave New World contains genius worldbuilding, double-sided imagination and a profound understanding of the human condition. It expresses societal anxieties and concerns that will forever remain relevant so long as civilisation exists. This is particularly important in recent times where trust in institutions are plummeting, and rightfully so. There are certainly dystopian elements to the world we live in today such as increasing austerity measures, continual bombings of the Middle East, election interventions and so forth. So, let us dive into the original novel’s themes and messages.

Dissimilar to the glamourised depictions of an underground resistance found in mainstream, young adult video games and movies, Brave New World imagines a society too far gone. Unlikely of redemption, Huxley’s world is one where suffering has been removed through extreme lengths. People are regularly sedated, academics are censored to protect people from harmful, new ideas and the patterns of human life have been disrupted without any realisation. Huxley goes to a great depth to construct this world with terrible, idealistic norms. Cremations are just efficient extractions of phosphorus for plant fertiliser, the notion of a family unit is seen as bizarre and children are conditioned through Pavlovian shock to carry an ‘instinctive hatred’ of books and flowers.

What separates this novel from 1984 or The Handmaid’s Tale is its Manichean imagery. In 1984 and The Handmaid’s Tale, anxiety and oppression are palpable from the very beginning. Contrasting this, Brave New World actually begins with the charm of a perfect society, ironically paired with the imperfectness of people. As Margaret Atwood questions in her foreword for this novel, do you see yourself as the civil member of society trying to ascend, or the supposed savage that accepts life’s anguish. In the end, she concludes: ‘If you’re a human being, you’ll see something of both, because we’ve always wanted things both ways.’

Some critical appraisals of Brave New World have called Huxley prophetic, however, I do not believe that to be the case. What he does is discuss a phenomenon that has characterised the worst event of human history; he criticises utopian egalitarianism. The Communist regime in Russia and Nazi Germany both started out as utopian visions with populist disguises. Brave New World is profound and disturbing because, in spite of the characters’ lunacy for social stability, their passion to pin the world down with order is understandable. Their plans both succeed and fail as humans are the imperfect cog in the utopian system.

When reading high literature sometimes I stumble into the issue of having to be in a certain ‘intelligible’ mood to read these sorts of books. But what I found with Brave New World is that Huxley essentially novelised a digestible essay. He made it very thought-provoking without losing any entertainment value. If anything, the derisive logic and rational construction of this world adds to the enjoyment. With extraordinary detail, imagination, and logic the mechanics of his world are technologically wondrous and also sociologically terrifying.

The relationship between people and society is an already interesting one. To make this relationship more captivating, Huxley communicates the fullness and emptiness of a utopian dystopian (while also following literary tradition with Shakespeare references). In this Brave New World, advancements have been made that people could not even dream of, yet people are so hollowed out that music, art, and poetry are just notes, images and words. Tragically, they suffer from a desire to learn and to appreciate nature’s beauty.

Without spoiling too much, one character wakes up from the elusive nightmare to find her perception of the world from its very premises fractured. It is profound, heart-shattering and just really makes you think. Another character, an outsider of this society and supposed savage sums up the main message of this novel beautifully. After encountering the normalised horrors of this world, he claims ‘the right to be unhappy.’

Psychology is both an intrinsic and an unconscious part of the novel. Despite the system’s grand conditioning, it cannot fully suppress humanity’s glorious irrationality. Neither the long-winded psychological prose of Dostoevsky, nor the confidential reflections of Dickens, Brave New World gathers inspiration from Shakespeare’s eternal wisdom, surpasses the anxiety-ridden knowingness of 1984 to conjure a society like no other, because it is dystopia as much as it is utopia.

Inclusivity: Where is LGBTQ+ Representation in Children’s Literature?

7 Recommended Reads for a Week in Lockdown