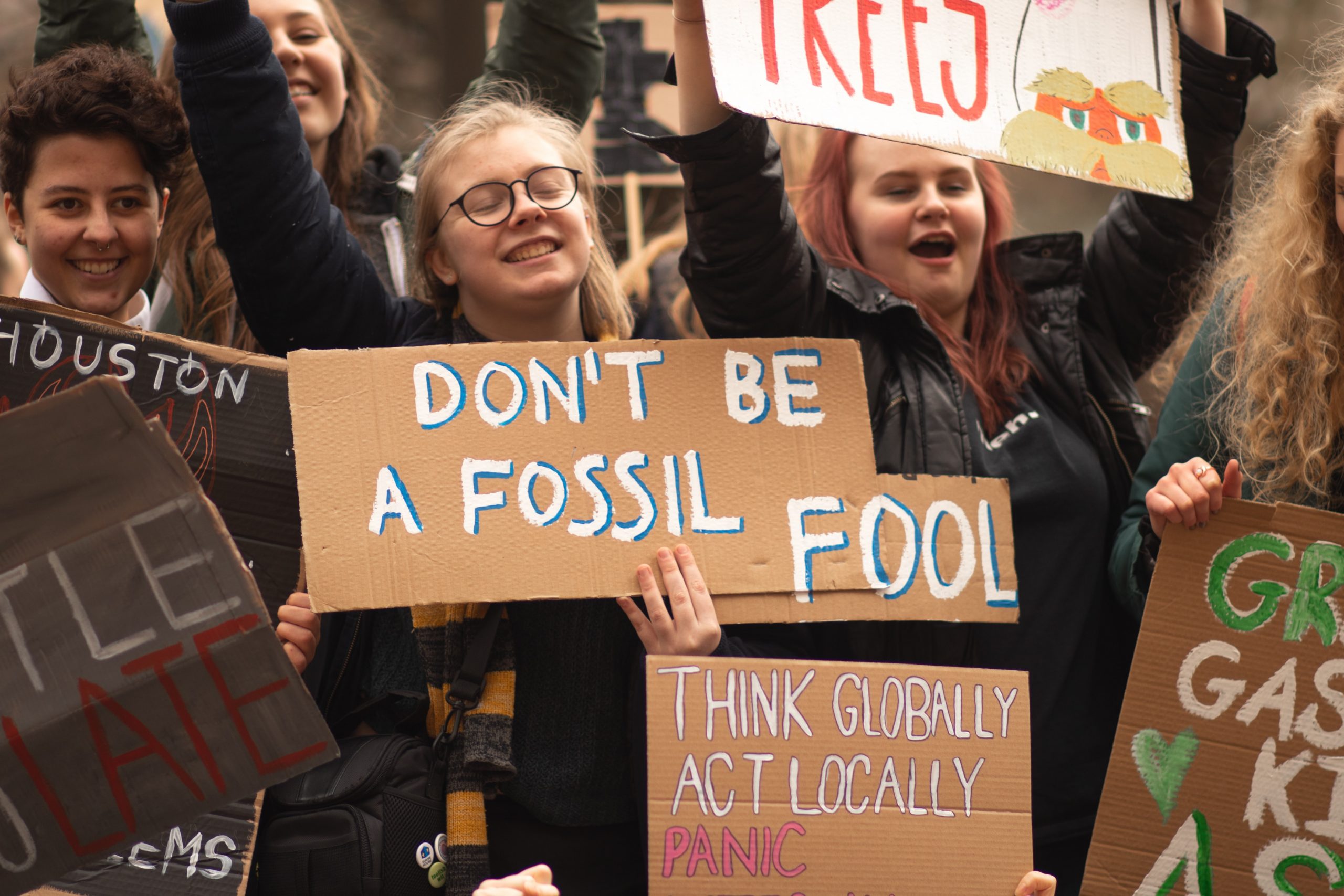 Not a day passes when society is not bombarded with reports on worrying climate news. From severe flooding in Germany and China, to the disastrous Australian wild fires of 2020, we are growing used to the turmoil of our planet. With the recent COP26 – the much-touted international climate conference which occurred in Glasgow from November 1st-12th, 2021 – the world got to see how our global leaders plan to tackle this rapidly advancing climate change.

However, these kinds of international climate conferences are increasingly being questioned for their efficacy. The Paris Climate Accord in 2015 has been faltering for years, with many countries not reaching their agreed goals, as procrastination and ignorance plague action. Oliver Milman of The Guardian stated on October 28th, 2021, that not a single sector of UK society ‘is changing quickly enough to avoid 1.5C in global heating beyond pre-industrial times.’ In 2020, atmospheric levels of greenhouse gases reached unprecedented highs, despite lockdowns fooling people into the belief that the climate was enjoying a brief respite.

Therefore, when on October 27th 2021, the University of Birmingham announced their new high-profile speakers for their Forum for Global Challenges – a platform established by the University with the aim of bringing together different sectors of civil society to discuss the shared problem of climate change – doubts arose over the value of these events and what they are actually facilitating in the monumental battle we face.

Public forums like these are, like large-scale political meetings, pretending to showcase climate excellence when in reality little tangible progress is taking place. For example, Birmingham University touts that its foundation as England’s first civic university translates into a unique role in contributing to the UN Sustainable Development Goals (SDGs); the blueprints for a more sustainable future. Nevertheless, societies like Fossil Free UoB claim in reality that little is being done to target climate change and sustainability. Instead, they argue rampant greenwashing is all that is taking place. Defined by the Global Citizen as: ‘when companies and organisations mislead their consumers or audiences by making them believe that a product, service they provide, or the organisation itself is environmentally friendly or sustainable, when it is not.’ This article explores greenwashing at Birmingham University with an interview with Fossil Free UoB; and the wider issue of greenwashing in society.

The following interview was conducted between Redbrick Comment and the coordinator for Fossil Free UoB, Evie West.

R: As part of Fossil Free UoB, what have you found out about greenwashing at the University of Birmingham?

EW: ‘The university puts on a huge volume of green events and lauds its environmental research. Looking at all this, you’re impressed by what they’re doing. But at the same time, we are the only Russell group university that hasn’t made any public commitment to divest from fossil fuels.

Birmingham University still funds fossil fuel companies and are yet to make a time bound, irreversible public pledge to divest. It’s quite sad because I do believe a vast number of those at university care deeply about the climate crisis. These events are often genuine, with a lot of thought put into them by the academics and students who run them. The finance office too has made laudable steps to dramatically lessen the exposure of the investment portfolio to fossil fuels in the last three years or so.

However, with the power held by those at the top, progress is stalling. A simple declaration to divest would set in motion the steps to divest that last of the universities’ money in fossil fuels. This sends a very powerful message; that the institutions of knowledge in our society refuse to cooperate with companies that are destroying our planet. Divestment campaigns are having a measurable impact on the finances of fossil fuel companies by removing their credibility; this is not a just a gesture, it will damage them, weakening their protective layer of greenwash with tangible financial results.’

R: In your opinion, can any meaningful change occur when greenwashing dominates the narrative of businesses?

EW: ‘I think the world is waking up to the fact we need to do something, and countering greenwashing is absolutely imperative to making sure meaningful action is actually taken. Watching adverts, it’s so easy to think that everything is being taken care of, and that you can save the world by little individual consumerist actions.

At universities like UoB, fossil fuel companies are still saturating campuses through scholarships, research funding and sponsorship. This is part of their greenwashing campaign – seeing the BP logo, for example, next to a respected university crest gives the company credibility and makes you trust them. So, universities are then complicit in the terrifyingly deceptive greenwashing campaigns of these companies.

As the world has just witnessed the latest conference of the parties, COP26, whereby little tangible climate action appeared to take place, it remains crucial that all society continues to act against greenwashing and acts of false environmentalism. We’re calling on the Vice Chancellor to make this pledge to divest. It would be so easy to do, and yet he refuses to engage with us. Until he plays his part, all the hard work of the rest of the university community is undermined and when promoted as part of the university, unfairly used as ‘greenwash’ to hide management’s inaction.

Crucially, we need to be aware that greenwashing events are part of a deceptive campaign to make us take responsibility, whilst those with power, causing the damage, continue as normal. This is where the real change needs to come from.’

As such, the slogan ‘deeds not words’ which was used by the women’s rights group, The Suffragettes, in their battle for female enfranchisement in early 20th century Britain, again fits perfectly. Whilst there is great value in all citizens becoming more climate conscious and changing their behaviours, there is an inherent need for those in power to end greenwashing and make real change. HESA shows that Birmingham university has reduced their emissions by only 20% over the last 15 years, the second lowest after Warwick University. Moreover, data was not submitted for 2019/2020. All this seems contradictory to the university’s sustainable words on show. Moves such as the recent collaboration with Siemens to make a ‘smart’ campus, which has been hailed as a partnership to significantly reduce the carbon footprint in ‘the decade of delivery for NetZero target’ (Professor Tim Jones, Provost and Vice-Principal of the University of Birmingham) fall short as fundamental core climate moves, such as divestment from fossil fuels, have still not been addressed.

Following on from this article, an interview was conducted with the University by Redbrick, challenging them to respond to allegations of greenwashing.

R: It can be widely found out that Birmingham still invests in fossil fuels. In the current climate crisis, with more attention and pressure to become greener placed on all society, how can UoB continue to allow this?

UoB: ‘The University of Birmingham is committed to sustainability, setting ambitious targets to achieve net zero carbon for scope one and two by 2035, and overall, by 2045. As well as using our pioneering research and innovative education to make major global contributions to the UN Sustainable Development Goals, we use original thinking to create new sustainable energy solutions and to support the global transition to a zero-carbon energy system.

Some oil and mining companies are the largest investors in renewable energy; with their size and scale, they are helping with the transition to cleaner fuel at a faster rate than small companies. The University invests in companies that have been identified as being committed to the transition to a sustainable future and an associated lower carbon world in line with the Paris Agreement by the University’s socially conscious, external investment managers. These companies comply with the University’s Responsible Investment Policy, which has excluded oil and mining companies where over 5% of their global revenues come from thermal coal, oil shale and tar sands production (considered the most polluting).

In addition to our pioneering research, innovative education and other practices, it is through this continued investment that the University can positively contribute to the transition to a sustainable future. The investment managers who represent the University regularly meet with the CEOs and governance boards of these companies to apply stakeholder pressure and influence change.

The University has also signed up to the UN Race to Zero global campaign which aims to rally leadership and support from businesses, cities, regions, investors for a healthy, resilient, zero carbon recovery that prevents future threats, creates decent jobs, and unlocks inclusive, sustainable growth.’

R:  Please explain what the University is actively doing to become more sustainable as a business, i.e. small campus actions to large scale moves. For example, are Birmingham planning to stop selling coffees in plastic cups on campus; how does the Siemens partnership create real change?

UoB: ‘We are a research-intensive University founded on social responsibility, and we are committed to embedding sustainability in all of our activities, including influencing the behaviour and actions of our students and staff, and engaging with our local communities.

We are utilising our expertise and our extensive network of partners to take a scientific approach to building and adapting our campuses at Edgbaston and Dubai to be innovative and smart, efficient, and flexible. This includes the strategic partnership between the University of Birmingham and Siemens which focusses on collaborations in areas such as smart infrastructure, mobility, energy and health.

We are working with our industrial partners to use technology to support our net zero carbon goal, running our campuses more sustainably, reducing emissions and optimising our campus for our community and the planet. Our Dubai campus will embrace sustainable practices, providing an exemplar building that can adapt to changes in technology, learning and climate. Utilising technology and mobile applications, students and staff will be able to maximise their efficiency and work smarter. We will continue our commitment to maintaining high environmental, social and governance standards across our investment portfolios.

We are supporting our community to consider the personal actions they can take to reduce their carbon footprint and contribute to socially responsible activities. We are supporting reduced car use through the redevelopment of the University Station, development of new pedestrian and cycle routes, and more flexible working.

To find out more about the University’s sustainability strategy and practices, all staff and students are invited to attend the Sustainability Town Hall which will be hosted on the 29th November, 10:00 – 14:00 in the Great Hall.’

It is clear that Birmingham University sees itself as taking action on climate change, with a desire to help create a sustainable future. However, by claiming that ‘some oil and mining companies are the largest investors in renewable energy…’, it seems there is a clear misunderstanding about the perils of the current energy companies and their attempts to lure continued investment through claiming to be ‘going green.’ Until items like plastic cups cease to be given out on campus, real divestment occurs from fossil fuels, and emission reductions become larger and clearer, any forums established appear a mockery to this goal. Whilst it is pleasing to hear that the University is pressuring companies, through research findings and the power the University innately holds, to become more renewable, this urgently needs to be the University’s main focus as we move to a more sustainable future.

This is not just Birmingham’s problem, all sectors across UK society, from ‘eco’ fast fashion to own our elected government, must end their use of empty green words and unite to make real change for the health of our planet and all those who inhabit it.

Lessons Learned To Date: The Government Should Be Facing More Repercussions