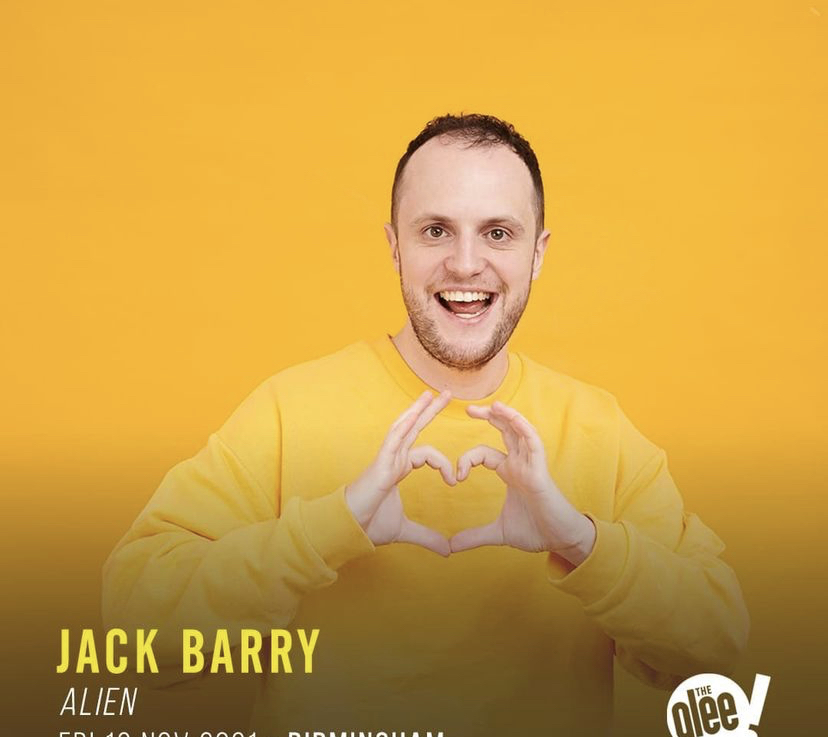 Culture Writer Charis Gambon reviews the stand-up comedy show Alien, writing that Jack Barry has a joke for everyone and highlighting his uniqueness

Written by charisGambon
Published at 19:00 on 18 November 2021
Images by The Glee Club

Jack Barry is a small time comedian who performs in a very unique way. He is his own opening act as his alter-ego Derek Jokes, who relies on a great deal of one liners to warm up for the ‘main act.’ Jack Barry had been out of the comedy circuit for almost 2 years due to COVID-19, and has come back much more nervous than before, even bringing a note book in case he gets lost – but all of this just adds to his charm.

Barry encourages the audience to get involved and allows for responses to his jokes. He also picks people out from the audience and asks their name. Jack saw me nodding in agreement to one of his jokes about the pandemic and asked me whether I had done anything during the pandemic. When I replied, he said, ‘I can’t make fun of that.’ He also congratulated a couple on being married three weeks and spoke to two audience members about their experiences as an immigrant in the UK when making jokes about his Argentinian wife.

Jack Barry truly cares about his audience and asked multiple times over the piece whether we were all ‘doing ok’ and if we were ‘enjoying the show.’ He even apologised for using his notes stating that ‘the tour was his first for a while.’

Barry made some of the current typical jokes about the topic of COVID-19. He joked that when everything was half open it was ‘the tyranny of the organised’ and that if you wanted to go to the pub you had to ‘book three months in advance.’ He went on to joke that as he is a spontaneous person, he found the half open stages incredibly difficult. ‘Seeing the nerds awakened something in him that made him want to give them wedgies.’

Jack Barry is very much a comedian for the average person; he will have a joke for everyone who purchases a ticket to attend one his shows.  Additionally, his shows are very interesting due to the fact that he is very unique in the way he showcases his comedy.

Barry jokes about topics that some comedians would avoid such as the topic of depression and therapy – sharing that his mom said he cannot be depressed because ‘he has had two holidays that year,’ which is a reference to the fact that British people believe that holidays are the best thing for when you are feeling down. He also comments that his therapist told him to ‘work through his problems on stage’ and that therefore must mean that ‘his problems are not too bad.’ Making jokes about the topic makes it a little less uneasy.

Barry also jokes about needing to define what his relationship with Martina was to border control when she came to stay with him due to her appearing to be a bit shady. He had to explain his job to them which did not sound like a real job as he ran the social media for KFC. He jokes that border control commented that ‘he was an upstanding citizen’ and that ‘he did not realise that KFC was a part of law enforcement.’

I would recommend going to watch one of Jack Barry’s shows as they are hilarious and a good way to spend an hour and a half. I can guarantee that you will have never seen anything quite like him.