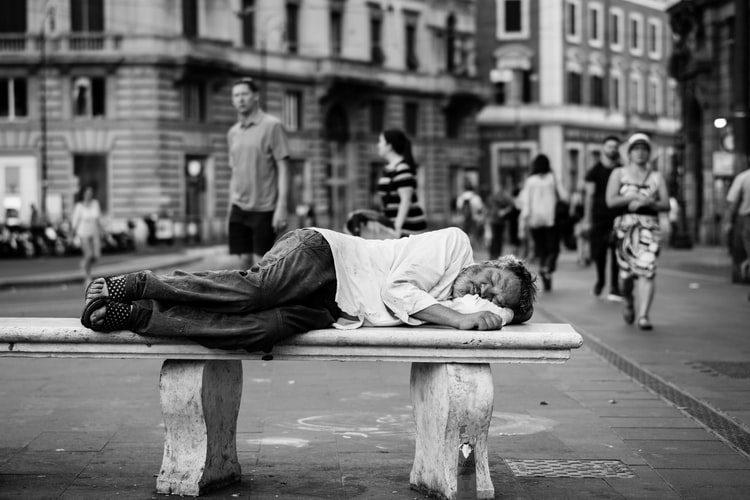 Tom Denham
English Literature student - writer for the Comment and Television Sections
Published at 12:00 on 30 April 2020
Images by John Moeses Bauan via Unsplash

How can society help the homeless? A question we perhaps ask ourselves each time we walk past those living on the streets, offering, at the most some spare change or food; at the least, a shake of the head and a long stare at the ground. Certainly, it’s a question we don’t ask ourselves enough, for the very existence of those living hand-to-mouth, with no secure base or support, is, quite frankly, both sad and indicative of the faults within the British welfare system.

So why has it taken a global pandemic to house the homeless? By the end of March, the British government had ordered councils to find emergency accommodation for rough sleepers within 48 hours to help tackle the spread of COVID-19. In response to this request, directed by the junior housing minister Luke Hall, hostels and night shelters were rapidly established to facilitate rough sleepers. According to governmental statistics, 1,000 homeless people have been housed in London and, as of 15th April, offers of safe accommodation had been made to 90% of rough sleepers. The current public health emergency has highlighted the vulnerability of these people: the homeless are three times more likely to experience a chronic health condition and are unable to self-isolate or follow sanitation guidance, according to Crisis (a leading UK homeless charity).

However, it is estimated that there could still be at least 900 people living on the streets of London. Moreover, due to limited funding, the conditions for those who have been accommodated are far from adequate. On 19th April, The Observer reported on the growing fears of a ‘catastrophic coronavirus outbreak’ among homeless people in hostels. The Single Homeless Project stated that there had been 19 suspected cases in its 32 London hostels, which accommodate 600 rough sleepers. Moreover, the Housing association Look Ahead claimed there had been at least one suspected COVID-19 case in all 10 of the homeless hostels it runs in London and Kent. Much of the blame for the spread of coronavirus has been attributed to the small size of these shelters and flats, alongside the need to share cooking and washing facilities. Not only this, but Look Ahead have also expressed worries concerning the unstable mental health of many homeless people, which impedes their ability to safely follow the social distancing and sanitation guidelines, and undoubtedly will be further affected by the challenges of the coronavirus.

Although local authorities deserve great praise for their quick and effective action in facilitating numerous homeless people, more must be done to ensure these people are kept safe. The Local Government Association (LGA) has stressed the need for additional funding in order to achieve this. However, in response to this proposition, Hall referred council leaders to the earlier announcement of £1.6 billion for local authorities’ coronavirus response; a sum of money which must seemingly be further and further stretched to accommodate all. With growing accusations that the government were largely unprepared for such a health crisis, active neglect of those left at the bottom of society would leave an even greater stain on their reputation and choice of actions.

What is important to keep in mind is that, as like the homeless are collected into the term ‘the homeless’, we do not just reduce these people into statistics. Each homeless person is not only symbolic of the most vulnerable in society, but also of the failure of the underfunded British social care system. This is vital in the consideration of what happens next for these people. Crisis has outlined a list of recommendations for the government to further help rough sleepers during the pandemic. Once the coronavirus has passed, and the  government lifts the current social restrictions and re-moulds economic policies, will these people simply be pushed back onto the streets to possibly face even greater challenges afforded by the virus’ aftermath? Or, with the presumed changes of perception on many levels, will the government grant extra funding for those charities and schemes which offer support and security to those who need it most? Only time will tell.

Street Mitigators: How Are We Helping the Homeless?