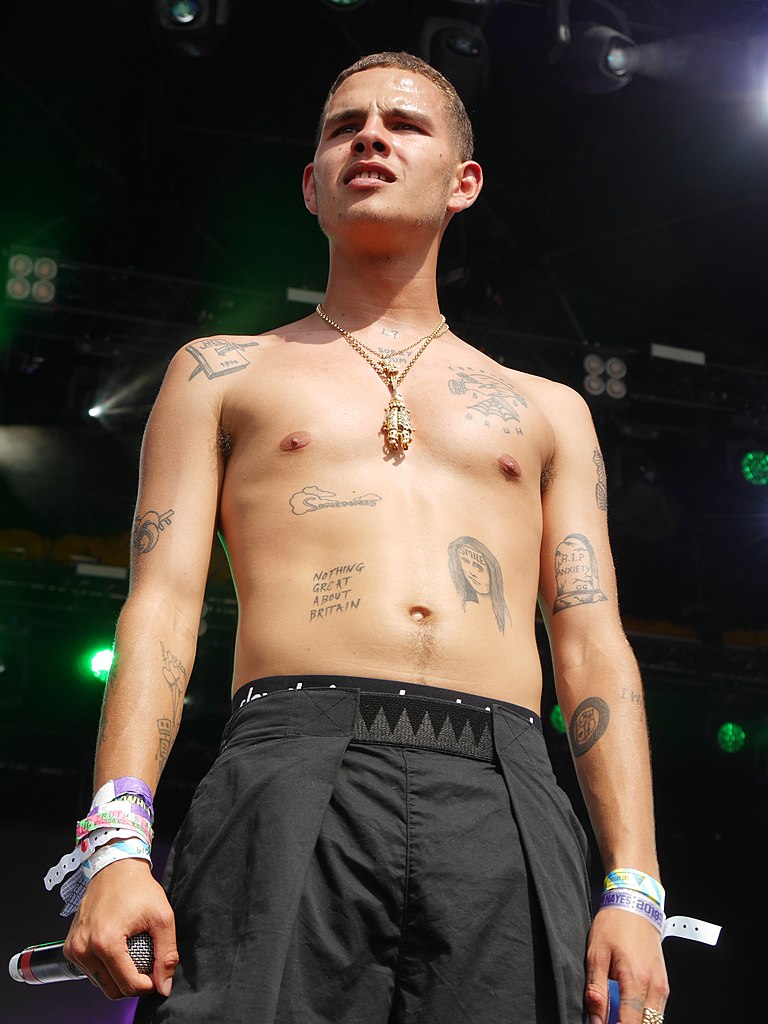 Written by dfernerrose
Published at 08:30 on 25 February 2021
Images by Edwardx

‘Hundreds of lanes, hundreds of lanes, hundreds of people who act all the same’. On track ‘Drug Dealer’, furiously gyrating in a formal suit, spitting out lyrics in his trademark yelping timbre, Slowthai satirises the professionals who, bleary eyed and monotonous, fill the commuter trains and office blocks of the UK. And yet Slowthai is different from these people. Unashamedly working class yet potently introspective, acutely aware of his capacity for violence and yet articulate and lyrical, Slowthai’s ability to move beyond stereotype and expectation makes him ideally suited to dish out fiery criticism to the UKs entrenched establishment – and in Nothing Great About Britain that is exactly what he does. The album is an expression of anti-establishmentism, it is a deeply personal autobiography of a life that was never meant to succeed, and it is a view into a musical mind unlike any other.

There is nothing hidden or nuanced about Slowthai’s resentment and hatred of the establishment figures and institutions of the UK. In track ‘Nothing Great About Britain’, the album’s namesake, Slowthai slurs unashamedly in a mock posh accent: ‘you respect me and I’ll respect you a little bit… Elizabeth, you c**t’, and this disregard for institutional authority is an attitude further exemplified by the rappers choice to present an uncannily realistic bust of Boris Johnson’s severed head during the Mercury Award ceremony – an award that he went on to win. The catharsis of Nothing Great About Britain comes from its blunt, and all too justified disrespect to the powers that be, but this disrespect comes from an intelligent place: Slowthai’s intuitive knowledge of how power structures operate and subjugate working class people in the UK.

In the music video for aggressive grime banger ‘Inglorious’, (featuring grime legend Skepta), an aggressively charged track on a relentless and ominous beat, Slowthai is held under water by a screaming police officer, in the background on towering banners is written the mantra ‘STRONG AND STABLE’ a defunct Conservative Party mantra. The aggression of the establishment is laid bare, as Slowthai, shirtless and inundated with tattoos is abused by a uniformed custodian of state power. And yet even whilst under water Slowthai continues to spit his bars with an uninhibited and defiant power: ‘all they do is chat breeze, right now I’m breezing’, contrasting the criticism and hate he receives, with the ‘high flying’ musical success he has achieved. Whilst the bluntness and cheek of Slowthai’s expression may not be for everyone, it is undeniably a form of expression brimming with conviction and authenticity.

‘Ladies’, one of Slowthai’s more viral tracks, is a stripped back tune, more contemplative than aggressive, characterised by an infectious and catchy lullabyesque chord progression. Produced by the talented Kwes Darko, the beat clearly reflects what Lyrical Lemonade describes as an ‘intricate and inventive’ style – Darko, with credits on 12 of the 17 tracks, is as good a reason as any to give the album a spin.

As the musical backdrop of the song makes its steady and slow progress, Slowthai reflects on his own self-image: ‘I got gaps in my teeth, they never gave me luck they’re just gaps in my teeth, I smile a lot why not?’ And Slowthai does have gaps in his teeth, along with a speech impediment that makes his spoken articulation harder to understand than his lyrical content – it is an embracing of such imperfections that make Slowthai’s persona appear chaotic and unruly from the outside. In fact, the rapper’s very name ‘Slow-thai’ is a play on his first name ‘Ty-rone’, and the ‘slowness’ with which his speech impediment effects his spoken voice.

In ‘Toaster’, a personal favourite from Nothing Great About Britain, we see Slowthai reflect further on his personal life, with lyricism that finds poetry in the everyday: ‘crumpets in my toaster, bum parked on my sofa, at one with nature, pissing off my neighbours’, shows Slowthai’s kingdom to be his own domestic setting. There is a kind of dignity in Slowthai being ‘at one with nature’, parked on his couch, awaiting the sound of popping crumpets, and a comical patriotism comes out of Slowthai’s playful and cheeky lyricism – whilst a portrait of Britain can be painted as a dystopian ‘Inglorious’ state of police authority and empty conservative mantras, there are things much more unassuming and innocent about British life, calling a backside a ‘bum’ rather than ‘butt’ for example, or an enjoyment of crumpets. You get the impression when Slowthai draws inspiration from his personal life that, despite lampooning authority, he does not want to be a ‘hero’ of anything in particular – he’s happy to just be a ‘normal’ guy, sitting at home, smiling with gapped teeth, eating crumpets, and making his music.

The viral hit that brought Slowthai to the mainstream, ‘T N Biscuits’, is a return to the head bopping routes of UK rap. The stripped back percussion of the track is dominated by a deliciously ominous, relentless, synth drone. The flow of Slowthai in this song is monstrous, the way he rides the beat would make you think his lyrical content is never-ending. The track’s opening line: ‘Drug Deelaaaa! I wear Nike not Filaaaaa’, is so infectious it will bounce around your head for days after listening.

On ‘Grow Up’, Slowthai shares an outlook on life: ‘growing up too fast, nothing don’t last, cause you can’t move forward, if you’re stuck in the past.’ This is a view that characterises Slowthai perfectly. His music is dynamic, innovative, and ahead of its time, yet in the same instance is full of youthful anger – a perplexed childlike need to constantly question authority.

It is fiendishly ironic that in the backdrop to Nothing Great About Britain’s release Slowthai was given the ‘Hero of the year’ award by NME, only to be dragged off stage after clashing with audience members during the award ceremony. Do not listen to Nothing Great About Britain if you want a hero. Listen to it if you want the wisdom of an artist who is brilliantly roguish and comically villainous – listen to it if you want to hear music by an artist of unique talent and expression. Listen to it if you too, are tired of being plunged under water by the establishment of a country who claims to be ‘great.’