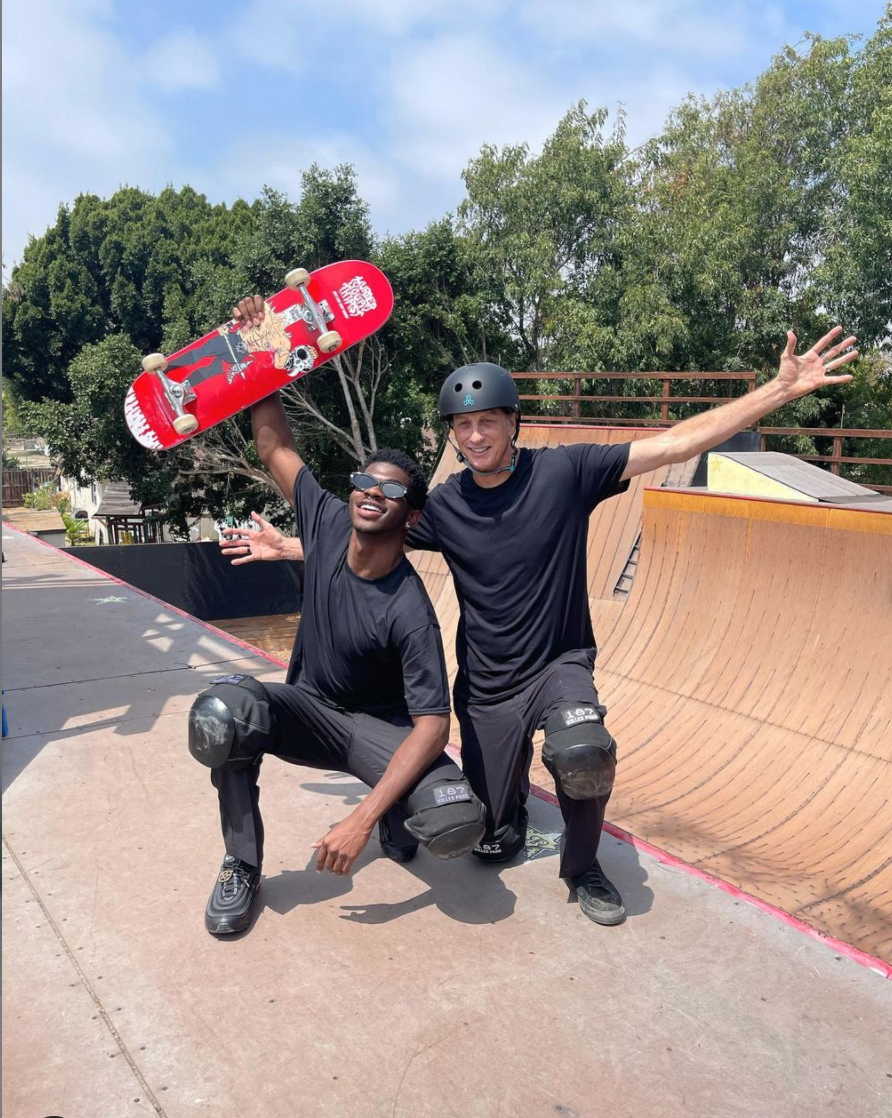 Social Secretary Ella Kipling dives into the issues and hypocrisy surrounding the reactions to Lil Nas X and Tony Hawk using blood in products, concluding that the difference in opinion is unjust and betrays a wider social issue

Ella Kipling
Published at 15:00 on 7 September 2021
Images by @lilnasx via Instagram

In March this year, Lil Nas X found himself at the centre of controversy after releasing ‘Satan Shoes’ – pairs of $1,018 trainers that featured an inverted cross, a pentagram and the words ‘Luke 10:18,’ which refers to the Bible verse where Satan descended from Heaven. The trainers also contained one drop of real human blood in the soles. Brooklyn company MSCHF produced the shoes, which were made using modified Nike Air Max 97s, and, fittingly, 666 pairs were released before selling out in less than a minute.

Nike claimed trademark infringement and said in a lawsuit: ‘MSCHF and its unauthorised Satan Shoes are likely to cause confusion and dilution and create an erroneous association between MSCHF’s products and Nike.’ Whilst this lawsuit was settled in April, and the shoes were confirmed to be recalled, Nas X took to Twitter to express his anger, saying that he felt it was ‘fucked up’ that Nike have ‘so much power they can get shoes cancelled.’

But Nas X’s problems didn’t end there. The release of his shoes sparked controversy online as comments flooded in from outraged parents, pastors, and even other celebrities. Former NBA player Nick Young tweeted that his children will no longer be allowed to listen to music by Nas X, South Dakota’s Governor Kristi Noem said that the shoes marked a need for people to ‘fight for the soul of our nation,’ and a pastor even devoted part of his sermon to condemn the shoes.

Nas X responded to the criticism on Twitter, telling Governor Kristi Noem to ‘do [her] job’ rather than complain about shoes online. He also shared a tweet explaining that he spent his ‘entire teenage years’ hating himself because of ‘the shit y’all preached would happen’ to him due to his sexuality. He said: ‘I hope you are mad, stay mad, feel the same anger you teach us to have towards ourselves.’ So, it made sense that when Tony Hawk released skateboards with his own blood on them, Nas X was quick to call out the hypocrisy of people who now held their tongue. In a social media post, Nas X wrote: ‘Now that Tony Hawk has released skateboards with his blood painted on them, and there was no public outrage, are y’all ready to admit y’all were never actually upset over the blood in the shoes? And maybe you were mad for some other reason?’

Hawk had donated his blood as part of a collaboration with water company Liquid Death to produce 100 skateboards. The company confirmed that Hawk’s real blood was used on the boards and that it was sterilised first. A video showing the process of using the blood was also produced, and viewers can watch Hawk give his blood, which is then mixed with a tin of red paint used to make the boards.

The distinct lack of criticism over Hawk’s creative endeavour marks a sharp contrast to the reaction to Nas X’s shoes earlier this year. Several people in the comment section of Nas X’s tweet about Hawk stated that the blood was not the aspect of the shoes they disagreed with, rather the satanic symbols. Others backed up Nas X, suggesting that people chose to aim hate at Nas X rather than Hawk due to his openness about his sexuality.

Lil Nas X has openly discussed his use of satanic imagery within the shoes and his music video for MONTERO, which features a clip of him descending into hell on a stripper pole. The rapper explained to TIME that he ‘grew up in a pretty religious kind of home’ and that religion for him was ‘fear-based very much.’ He elaborated that ‘Even as a little child, I was really scared of every single mistake I may or may not have made. I want kids growing up feeling these feelings, knowing they’re a part of the LGBTQ community, to feel like they’re OK and they don’t have to hate themselves.’

In my opinion, for Nas X, satanic imagery is not his way of being controversial for the sake of controversy. Religious imagery within his music and art is his way of reconciling his identity with his childhood, a way of claiming his sexuality proudly and rejecting religious shame he felt was forced upon him as a child. In his eyes, gay people have spent a lifetime being told they will go to Hell for their sins, then when he chooses to represent himself going to Hell in a song, he is criticised by those very same people. He encapsulates this hypocrisy in a tweet from March, where he wrote: ‘Y’all love saying we’re going to hell but get upset when I actually go there.’

Gillette Advert Controversy: What Happened When a Woman Mansplained