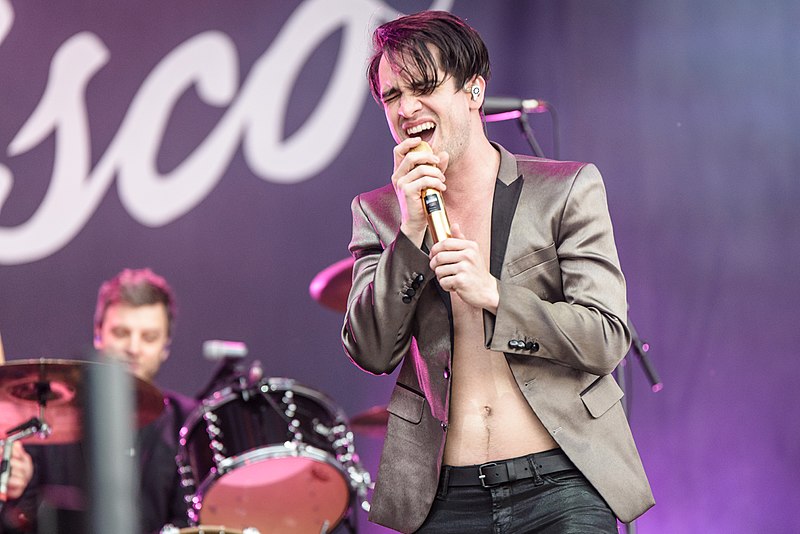 Live Review: Panic! At The Disco

Music Critic Emily Breeds is impressed by Panic! At The Disco’s energetic performance

It is hard to pin down exactly what Panic! At The Disco sounds like. Perhaps it is the reason for their continual success since the release of their first album A Fever You Can’t Sweat Out in 2005. Perhaps it means they always remain appealing. After releasing five subsequent albums, they topped the charts with their most recent album Pray for the Wicked which contained hit single ‘High Hopes’. Now only comprising only of lead singer Brendon Urie, the
frontman passed through the Arena Birmingham on his Pray for the Wicked tour and took the stage by storm.

The first support act, ARIZONA, immediately livened the arena as they blended rock with electropop. After they dedicated it to the crowd, the track that stuck with me the most was ‘Cross My Mind’, a deceptively soft song that suddenly hits you with heavy guitar riffs and raw vocals. The second support act, Danish artist MØ, ensured the crowd were constantly dancing to her fun electropop beats, which included the chart hit ‘Lean On’. And so, it was time for Panic! At The Disco. As Toto’s ‘Africa’ finished a 10-minute timer, there was a pause that seemed to last a lifetime. The excitement in the room was palpable. Then, Brendon Urie literally shot up from beneath the stage and sparked a wholly dynamic show with ‘(Fuck A) Silver Lining’. The show remained spectacular and theatrical; Brendon even covered ‘The Greatest Show’ after appearing on The Greatest Showman’s tribute album. The album artwork for each song, copious neon lighting, and even fire appearing for ‘Crazy=Genius’ made for highly impressive staging. But the real theatrics occurred when Brendon walked into the centre of the audience towards a white piano during ‘Death of a Bachelor’, greeting fans as he went. As the piano ascended and floated towards the stage, he covered Bonnie Raitt’s ‘I Can’t Make You Love Me’ which effortlessly blended into the heart-breaking ‘Dying in L.A.’ True to Panic!’s continual defiance of conventions, the live version of ‘This Is Gospel’ featured a large instrumental section which spotlighted the brilliant tour musicians and made the usual iconic powerhouse even heavier. Brendon demonstrated his slick drumming abilities, and frequently added incredible falsetto riffs to songs. Though ‘Hallelujah’ is already complex and often veers into higher pitches, Brendon kept breaking into a riff, simply because he could. He also performed a cover of Queen’s ‘Bohemian Rhapsody’, which he absolutely belted out, showing off his four-octave range. The band interspersed classics with Pray for the Wicked throughout the night, proving how
far they’ve come. Possibly adhering to their mainstream success in recent years, Panic! mostly stuck to playing classics from Death of a Bachelor and Too Weird To Live, Too Rare To Die! during the first hour. This being said, I was delighted to hear them play two earlier classics, ‘The Ballad of Mona Lisa’ and ‘Nine in the Afternoon’. The classics clearly sustained the energy of the arena, as ‘Don’t Threaten Me With A Good Time’ followed the first song.
The iconic surf-rock refrain, sharp flip between soft and screaming vocals, and thrashing drums made for a driving, jump-worthy tune. And the fast drum beats and funky trumpets of ‘LA Devotee’ ensured you couldn’t help but dance, despite the low vocals and high key changes being hard to sing along to.

‘One of the Drunks’ kicked off four consecutive Pray for the Wicked songs, bringing a lighter pop vibe to the arena. Brendon’s ecstatic stage presence was infectious as he loosely danced around. The classics came back; ‘Girls/Girls/Boys’ literally ended with a bang, with multicoloured confetti fluttering from the ceiling. Brendon, clad in rainbow flags handed to him by audience members, proceeded to reassure anyone who felt marginalised that they
‘do belong’, and thanked them for existing.

‘Emperor’s New Clothes’, a wildly outrageous song, finished off the set. The crowd soon cheered for an encore, and Panic! bounced back with ‘Say Amen (Saturday Night)’. Brendon then went straight back to his roots with Panic!’s most quintessential song, ‘I Write Sins Not Tragedies’, taken from their largely rock-inspired first album. The show ended on a total high with ‘Victorious’, encapsulating both the victories of Panic! and the pure life that shot through the show.

No matter how much Panic! At The Disco’s style has changed over the years, their upbeat essence has never faded, judging by the joy radiating from both Brendon and the audience. I would highly recommend seeing Panic! At the Disco live. Even if you’re not a huge fan, I guarantee there is something in their music for everyone. And seeing Brendon Urie jump around and backflip on stage is enough to put a smile on anyone’s face.