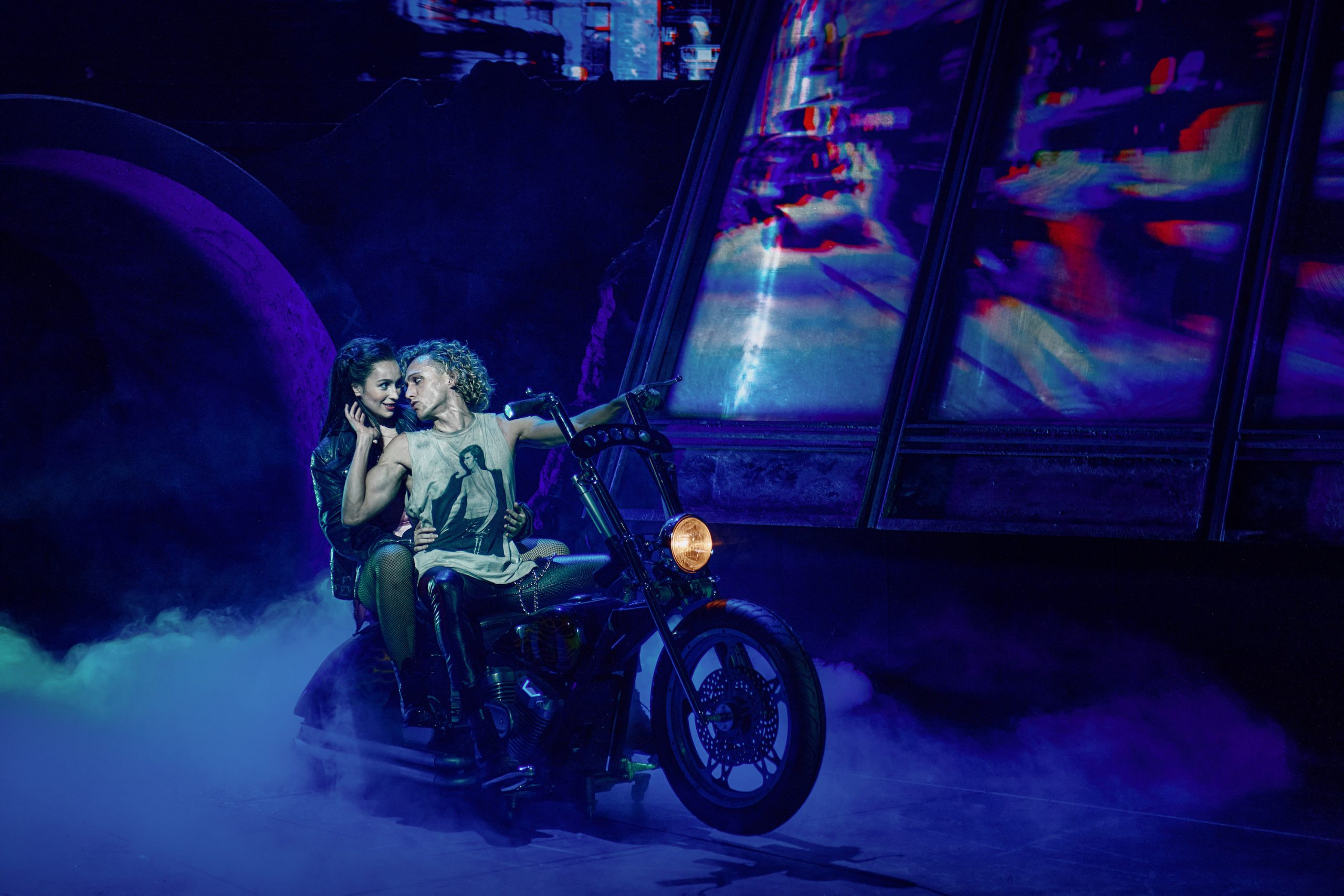 Musical Review: Bat Out of Hell – A Double Perspective

Culture Writers Charis Gambon and Joi Foote come together to review Bat out of Hell, the musical based around Meat Loaf’s greatest hits

charisGambon and Joi Foote
Published at 18:00 on 6 January 2022
Images by Chris Davis Studio

The Bat Out of Hell musical is definitely unique; I have never seen anything quite like it. There is not much dialogue in the piece at all as most of the speech is conducted through Meat Loaf songs. Each cast member is incredibly talented, and their singing is outstanding. The songs are sung in a different style to their originals by Meat Loaf but all of the songs work. The most famous songs are used at pivotal moments in the musical such as ‘Bat out of Hell’ at the end of act one.

As part of the show, there is a camerawoman who films most of the scenes in Falco Towers, in Raven’s bedroom. This allows the audience to see the scenes on the big screen on stage and through the windows of Falco Towers. I was however a bit unsure about what the specific aim of the camerawoman was as it was never explained, which left it feeling a little odd.

The show is dynamic, and every cast member clearly gave their performance their all. The personality of each character can be clearly seen as each performer fully committed to the roles they were playing. Glenn Adamson in particular gave an outstanding performance as Strat, he really managed to capture the eccentric and bizarre nature of the 18-year-old lost boy. Martha Kirby, Rob Fowler and Sharon Sexton also gave flawless performances as Raven, Falco, and Sloane.

The set was perfect for the setting of a dystopian landscape. It really helped the audience to imagine what the landscape of obsidian would look like. Falco Towers stands out against the desolate and black background, which was the intention to show that the city revolves around Falco.

I did find however find that the show ended rather abruptly and left the audience wanting more. I was personally surprised that we had reached the end of the show. The cast does go on to sing an additional song though to which audience members stood up and clapped along.

At the end of the show, Falco actor Rob Fowler invited the audience to take out their phones and record a touching message he had to share about theatre. In this message, he stated that ‘live theatre is back’ and to encourage your friends and family to attend which I thought was a personal and powerful sentiment.

The award-winning musical Bat Out of Hell made its way to the Alexandra Theatre in a celebration of forbidden love and all things rock and roll.

We follow the love story of star-crossed lovers Strat (Glenn Adamson) and Raven (Martha Kirby). Strat is the gang leader of ‘The Lost.’ Think Peter Pan’s lost boys but on steroids. They never age as they remain 18 forever. Raven however is the daughter of Falco (Rob Fowler), leader of the dystopian wasteland Obsidian.

When Strat and Raven lock eyes, they instantly fall in love. However, they come from two different worlds that often conflict with one another. Strat and The Lost hideaway in the Deep End, whereas Raven’s father forbids her from ever going outside, let alone interact with ‘the punks who just want to rebel’. Will they find their way together or are they doomed to stay apart?

There was something engaging about having members of the cast visible on stage before the musical had even begun, performing ordinary movements and interacting with one another in a simple manner. The same is true of the interval. It was not a performance that began and ended for the audience’s delight; rather it was continuous, ongoing action. Something so simple but effective heightened this sense of escapism. I was more attuned to the world they had created before me.

The unique use of staging in this performance served quite well in its purpose. We were not only confronted with the main stage where the predominant action took place. Directly behind this, we had a room that was projected onto a screen. This facilitated the ability to have two spaces of action at one point. In one particular scene, Raven would be in her room longing to hang out with The Lost as Falco and Sloane (Sharon Sexton) reminisced about their youth.

Speaking of Slone, Sexton’s portrayal was amazing, to say the least. Just the right amount of sass and flair, with a touch of humour and warmth. As an ‘award-winning West End leading lady’ she was a fitting choice for this role. Her vocals packed a punch, executing some of the greatest rock songs from Jim Steinman and Meat Loaf. The vocals too of Joelle Moses who played Zahara and Martha Kirby were incredible and particularly stood out for me.

The musical ended with the audience in a standing ovation as the cast delighted us with one more performance. This was completely different from musicals I have watched previously, and I loved every minute of it. Quite easily up there as one of the best musicals I have had the pleasure of attending.