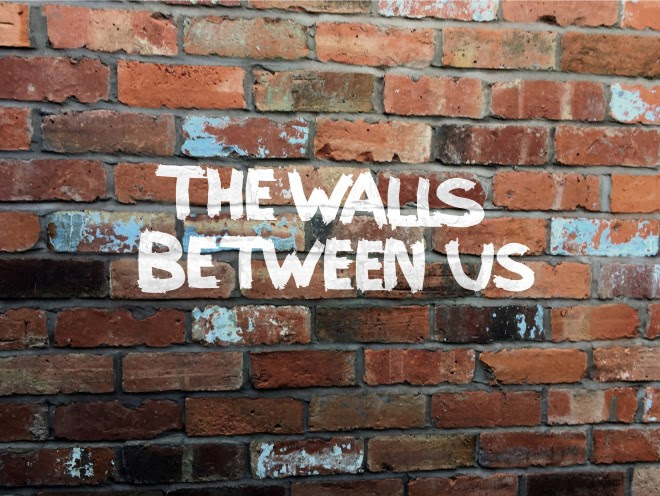 Travel Editor Sarina Shah and Culture Writer Joi Foote review The Walls Between Us, finding it a poignant discussion of family dynamics and male mental health during the COVID-19 pandemic

Joi Foote and Sarina Shah
Published at 13:00 on 1 December 2021
Images by The Rep Press Images

Content Warning: This article mentions themes of depression and suicide.

The Walls Between Us portrays the raw and real effects that occurred for many as a result of the pandemic. Lockdown restrictions confined many of us to our homes for weeks, affecting the individual person in many different ways. Writer Farrah Chaudhry, alongside director Suzanne Gorman ‘shine the spotlight on one family’s experience of Covid-19.’ Their three-man play, centred around the Jamil family, explores this in the context of a traditional South Asian household, honing in on the stereotypical dominant male figure and the inability to facilitate discussions on mental health.

Upon entry, we are confronted with a domestic setting; the living room of Rahil (Vimal Korpal), Fazeela (Promila Bittu-Safaya) and Malaika (Ravneet Sehra). There are no extravagant or fancy sets to fall behind. We are presented with the mundane, the ordinary, as we observe them seated for a family dinner in front of the TV. This alongside our shared experience of COVID-19 forces us to relate to the characters before us, removing the distance that otherwise renders characters as the other.

What follows is Rahil, after being required to work during the height of the pandemic, making the choice to self-isolate in his room. His elderly mother and his daughter, who is unable to return to university, must also remain indoors. We watch a family forced to navigate life in constant proximity with one another, engaging in conversations they never thought they would have.

What was once a singular family unit becomes two separate and distinct lives. Rahil contained to his room as Fazeela and Malaika occupy the same space. Although they often come together in conversations through the wall, the separateness works to visually portray feelings of isolation one may feel when experiencing depression.

This is captured particularly well when we see Malaika sanitising the recent grocery shop on one side of the stage, whilst simultaneously her father endures an intense workout on the other side. The use of distinct spotlights again feeds into the separateness that has been allowed to fester.

Rahil’s behaviour becomes more erratic as we witness the deterioration of his state of mind. For example, the dramatic monologue in which he talks to the picture of his deceased wife. This is just one moment of many that we bear witness to what depression can look like in a person.

Often, Malaika’s character felt too sensationalised. I found the adoption of supposed young adult lingo jarring and at times quite stereotypical and over the top. In hindsight, I question whether this was a deliberate tactic that enabled us to see clear parallels in her character at her most vulnerable moments.

The use of a multi-generation family so resourcefully captures a multitude of feelings and constraints that arose during lockdown, from lack on interaction with friends and the outside world to the pressures regarding jobs and income. Although we are presented with the depiction of a traditional South Asian household, it transcends cultural borders.

It was this sense of relatability that resonated with me. Everyone in the audience could relate this to something from their own experiences. If it was not the endless amounts of daytime TV and social media, it was the newfound time dedicated to working out or even the obsession with people watching.

In writing The Walls Between Us, Farrah Chaudhry went directly out into South Asian communities, engaging in lengthy discussions to hear people’s stories and experiences. Such discussions alongside conversation with phycologists to accurately portray depression and do so in a way that gave their stories justice.

The play focused particularly on male mental health. Male suicide rates in 2019 were at a 20-year high and she felt that no one was really talking about it. Models of traditional South Asian men manifest itself in so many ways. The pressure of going out to work and being responsible for the entire household.

In South Asian culture, it is not customary to talk about feelings, or talk about anything real – as the character Malaika point out. This is explored here in a comedic way whilst capturing the reality for so many families. Mental health is something that is not discussed. It is brushed aside and often the older generations do not have the language to communicate this.

Director Suzanne Gorman said it felt wonderful to work on a piece that felt open and honest about many of the things we experienced in lockdown, and to open up discussions about mental health in South Asian families.

The Walls Between Us was a compassionate and moving depiction of mental health, more specifically depression. I especially thought the use of closed captions throughout was important. I think we can all take something from that and the move to increasing inclusivity in the arts.

The Walls Between Us, the name of this short play performed by the SAMPAD group, is a great way to summarise the play. It alludes to the physical and mental barriers that we put between us during the height of the COVID-19 pandemic. It is situated around three characters from a South Asian multi-generational family: Fazeela – the grandmother, Malaika – the granddaughter, and Rahil – the father, who are all forced back under the same household as a result of the COVID-19 restrictions.

They all encounter their own challenges. Malaika is unable to return back to university, Fazeela is worried about how rapidly lockdown has come into force and Rahil, who is a key worker, isolates himself from the rest of his family and is still trying to cope with the loss of his wife 10 years ago, having his daughter back in his life and simply wanting the best for her.

Being from a South Asian background myself, of Indian heritage, I could really identify with some of the narratives portrayed in the play. I live with my grandmother and parents and could see a reflection of the play in my family. A recurrent theme that was brought up in the play was the inability for many South Asians to speak about mental health amongst their family, their feelings and in this play how they were struggling to deal with lockdown – which is something that is apparent in our culture even today, with it being hard to have open conversations about topics such as depression or anxiety, and it being a taboo subject.

However, something that was positive to see and reflective of the direction our society is heading in now was that Malaika was able to start those conversations with her dad and to break down that physical and emotional wall, reflective of the view that our generation has more awareness of mental health through social media and education, for example.

In the post-show Q&A, I asked about whether the actors thought that in future generations there would be a more open approach to discussion about mental health and emotions, and there was a wide consensus that there would be, which is very positive to hear!

Another very important subject which was covered in the play was regarding male mental health awareness. This is particularly relevant as it is currently Male Mental Health Awareness month, and I was saddened to hear that in 2019, male suicide rates were at an all time high. In this case, Rahil isolates himself from the family, in both conscious and subconscious ways – isolating himself physically to keep his family safe as he went out to work, but furthermore keeping his emotions to himself.

It was an incredibly touching play, and to hear at the end that it was based on personal experiences and hear some of the stories of those that helped shape the play was really insightful and you could see the authenticity shine through in the acting.