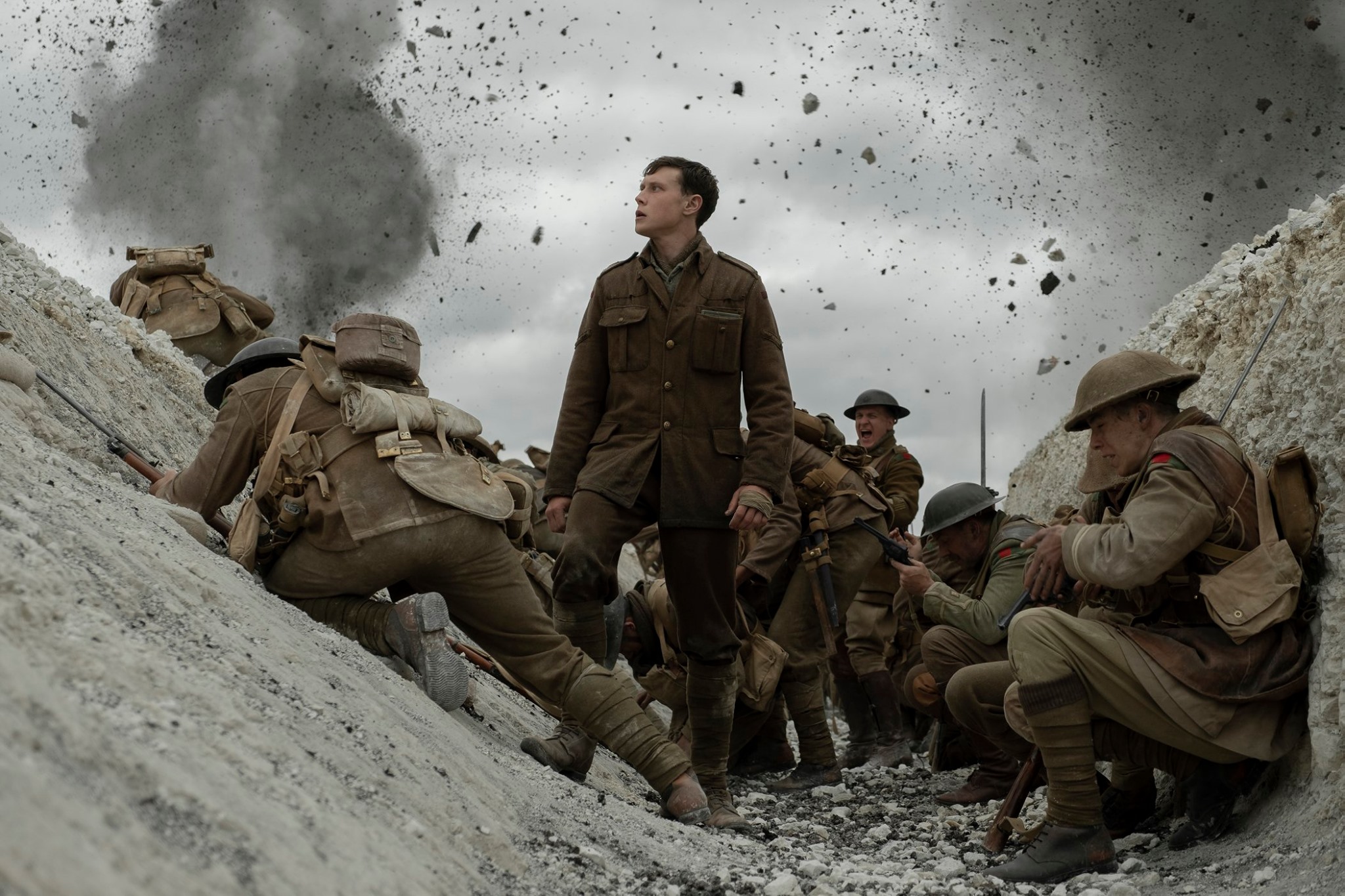 Film Critic Rhys Lloyd-Jones is blown away by the beauty and bombast of Sam Mendes’ war epic 1917, yet finds the Oscar-hopeful limited by its own design

Written by Rhys Lloyd-Jones
Published at 16:00 on 21 January 2020
Images by Entertainment One UK
War films are a hard mark to hit. The temptation to dive into gunfights and bombing runs, marinaded in forceful patriotism, is a trap that cinema falls into time and time again. Machismo and glory lead the vanguard, whilst the horror and catastrophe of combat take a backseat. These films are often bombastic, whilst the true reality was harrowing. 1917, a one-take war film, is an exception. Free from the shackles of Bond, Sam Mendes returns in his second directorial war film since 2005’s Jarhead, a unique and brilliant character study of a spiralling U.S Marine in the gulf war. Mendes does not shy away from the stark nature of war, nor does he move away from devastation or decay. Instead, 1917 utilises the corruption of magnificent, natural landscapes to create an odyssey that is at once hellish, mystical, ineffable and, often, tragically beautiful.
The one-take effect of 1917 sounds like it could be a gimmick; a tool to clamour for attention and difference. However, the use of editing, or perhaps lack thereof, creates an experience that is tense, exhilarating, and, above all else, claustrophobic. The film follows two young soldiers, played by Dean Charles Chapman and George MacKay, as they travel across Ottoman-occupied land in France. They cross German trenches, abandoned homesteads, ruined towns, and vast battlegrounds, over and below ground, through heaven and hell. The camera doesn’t flinch in covering their journey, stunningly captured by director of photography Roger Deakins, who here produces some of his most memorable work. Though the dialogue is minimalist, Chapman and MacKay use their physicality and expression excellently, as age and weariness become etched on their young features. MacKay specifically conveys this weariness of a soldier excellently, and manages to bring a level of humanity to the character, despite the role having little meat to explore. Though 1917 boasts a notable cast of cameos, ranging from Colin Firth, Andrew Scott and Benedict Cumberbatch, the real star is the visuals. Each set piece is staged gorgeously: Mendes shows off trickery with perspective and lighting to keep you fixated on the frame. Not only this, but he uses the props of warfare for cinematic technique. Rubble is used to disorientate the viewer and the sound of bullets are more effective as a jump-scare than most horror film tropes. Trenches are effectively oppressive and flares are used to provide florescent lighting against pitch darkness. Mendes does not romanticise war but the striking imagery used does almost deify it, as something powerful and devastating.

Undercutting the squelch of mud or the impact of shells is Thomas Newman’s score, a nail-biting baseline throughout the film. Newman does not encroach on the tender moments between Chapman and McKay, instead knowing when to swell, and knowing when to falter. In epic moments of heroism, the score becomes regal and biblical, pushing your heart further into your mouth. When the film is not acting as an adrenaline shot, it still heightens the tension with a similar rhythmic ticking as 2017’s Dunkirk. The film utilises these performances, camerawork and score as effectively as the other, for a film which places emphasis on wasted youth, not only through death, but through trauma and loneliness. At no point does the film feel as though it pulls its punches, but it wisely does not bask in its violence either.
The protagonists rarely fire a weapon, and instead, the aftermath of violence is on cold display. This choice feels more like a meditative reflection of war rather than an action film. The most moving scenes come from quiet reflection. The collective nature of man and nature come together in an unexpected surprise, derived from the extended time we spend in the landscape, thanks to the one take aspect. Scenery is not only a character, but an ally, guiding our protagonists home and shielding them from harm. The World War feels literal in that sense.

As technically impressive and moving as 1917 is, it is not ground-breaking. Whilst it offers a mature and thoughtful take on war, it does not push further with it. Mendes has proven he is capable of unique flair for trauma and deterioration with Jarhead, a film less moving, but more interesting. In a year of exciting, off-beat and unexpected cinema, 1917 feels almost archaic in comparison. The subject matter should never be forgotten; in fact, it almost demands and deserves newer and more impactful explorations. Mendes should be commended for this film for the precise and effective direction, yet 1917 falls short of perfect, for almost ineffable, imprecise reasons. The film unfortunately carves out both its beauty and its own limitations with its structure. The films passes by, beautiful and moving, without leaving an impact as great as it should deserve.

Overall, 1917 excels at what it sets out it to do. Armed with a heart-pounding score and clever, understated performances, Mendes and Deakins paint a picture of tragedy, mingled with glimmers of hope and beauty. Whilst the film does not tear apart your conception of film, it does strengthen your love of it. It handles war with care and respect, never once substituting reality for action. It is tense, brutal, heart breaking, and thoroughly worth watching.

Images courtesy of Entertainment One. All rights reserved.