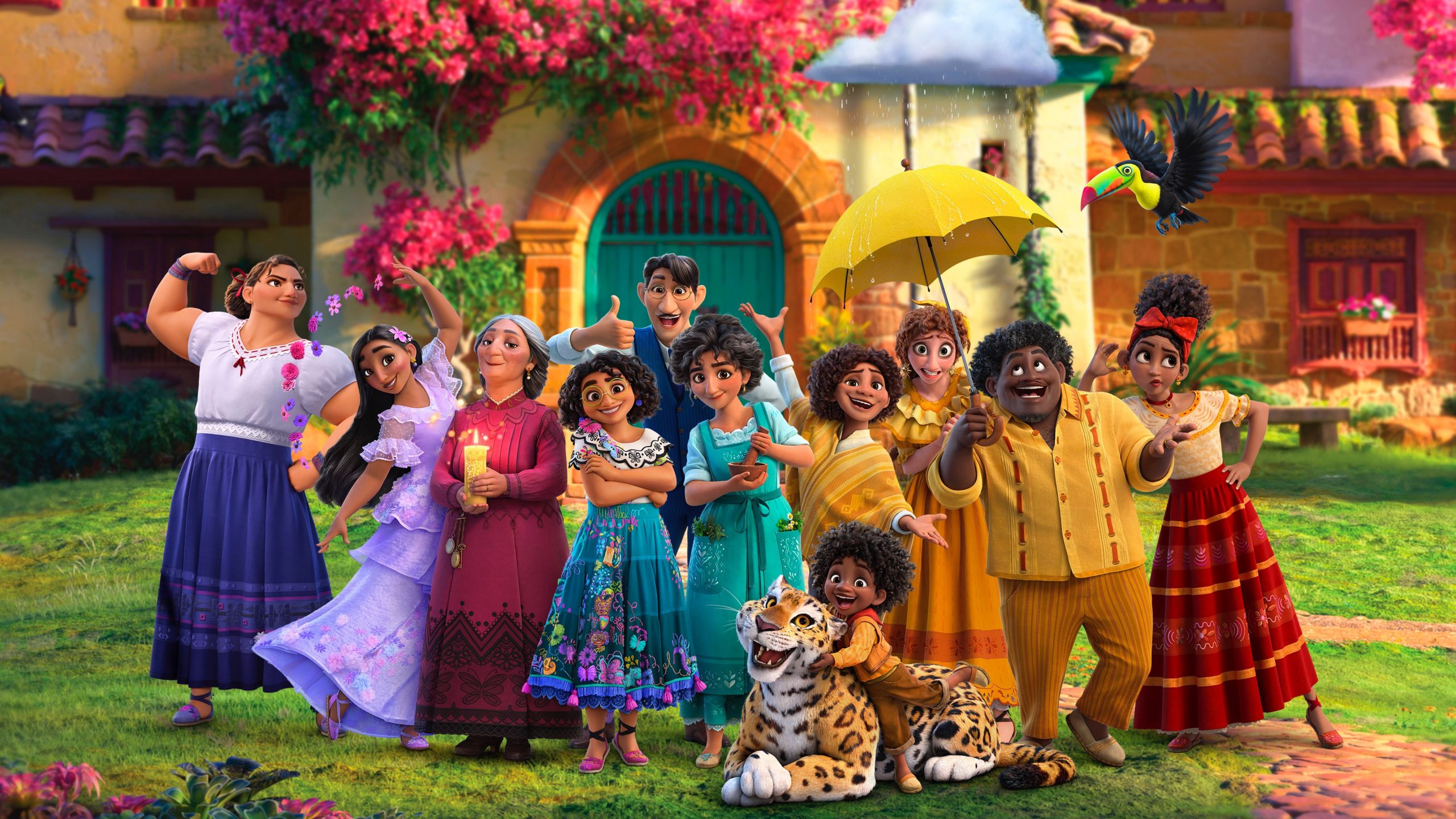 Encanto follows Mirabel (Stephanie Beatriz) as she navigates her way through life being the only Madrigal without any magical or supernatural abilities. Mirabel fits right into the conventional Disney heroine, someone who is an outsider in their own family. The soundtrack boasts numerous catchy tunes which are sure to be stuck in your head.

Set in the Colombian mountains, the Madrigal family possesses many fantastical magical abilities. Luisa (Jessica Darrow) possesses the power to lift anything heavy without any struggle and Isabela (Diane Guerrero) possesses the power to bloom a flower wherever she steps.  Tia Pepa (Carolina Gaitán) possesses a power which means her mood affects the weather that is around her. These gifts are given by their magical house, their ‘casita’, and this is all merely a miracle. This miracle or ‘encanto’ all came to be when Abuela (María Cecilia Botero) needed one herself, after the death of their Abuelo, and the house and town that the Madrigals now live in sprouted out of the ground.

The acting of the actors and the actresses in Encanto was fantastic. Stephanie Beatriz really made Mirabel, as the main heroine and protagonist of the story, stand out through her humorous and witty approaches. The other characters were also very unique in their own ways. Camilo (Rhenzy Feliz) was a very funny and memorable character; through his shapeshifting abilities and wit, it was very hard not to break a smile whenever he appeared on the screen. The film’s cultural aesthetics reflected Disney’s attitudes towards different cultures and what they ultimately wanted to achieve. This is seen through the little things, including the food which was eaten by the Madrigals and the surrounding town, as well as the magical realism which was fantastically achieved by Disney’s producers and animators.

The pacing of the film was steady and easy to understand without getting too complicated. The plot of the film was simple yet effective. The main message of the film really stuck with me in the end; generational trauma and inner conflict is always a problem, even though it may not be obvious at first glance, and it is underlying. The only way it can be solved is through talking with your family members and understanding where they are coming from.

The cinematography and colour palette of Encanto was absolutely fascinating. Each of the colours Disney producers used to reflect a character’s mood or foreshadow a potential character’s outcome was amazing. It was particularly interesting in the song ‘We Don’t Talk About Bruno’, where the main colour used was green, conventionally the colour of Disney villains, until we get to know the origin story behind Tio Bruno himself. The direction of the film was typical of that of any Disney film. Although it followed this conventional direction, I was very pleased with the outcome of Encanto and I definitely feel as if there is room for a sequel from Disney.

The soundtrack of Encanto is definitely one which sticks in your mind. As well as the songs themselves being catchy, the important messages behind them shine throughout the film. Luisa’s song ‘Surface Pressure’ speaks about the burden of being the oldest sibling and carrying all the family burdens (in Luisa’s case, physically and metaphorically).

Encanto has received three Oscar nominations. This is for Best Animated Feature, Best Original Song for ‘Dos Oruguitas’ and Best Original Score. I definitely think the film will live up to its hype and could receive wins for all of these categories, even though these are very competitive.

Encanto is a film which comes at a time of change for Disney, where the main protagonists in their films are not the characters themselves but the inner conflict that is between them. This is shown in the films prior to and after Encanto, as well as the film itself, which include Luca and Turning Red.

Note: This article was written before the 94th Academy Awards ceremony, in which Encanto won the Best Animated Feature category

Encanto is available now on Disney+

Review: The Worst Person in the World