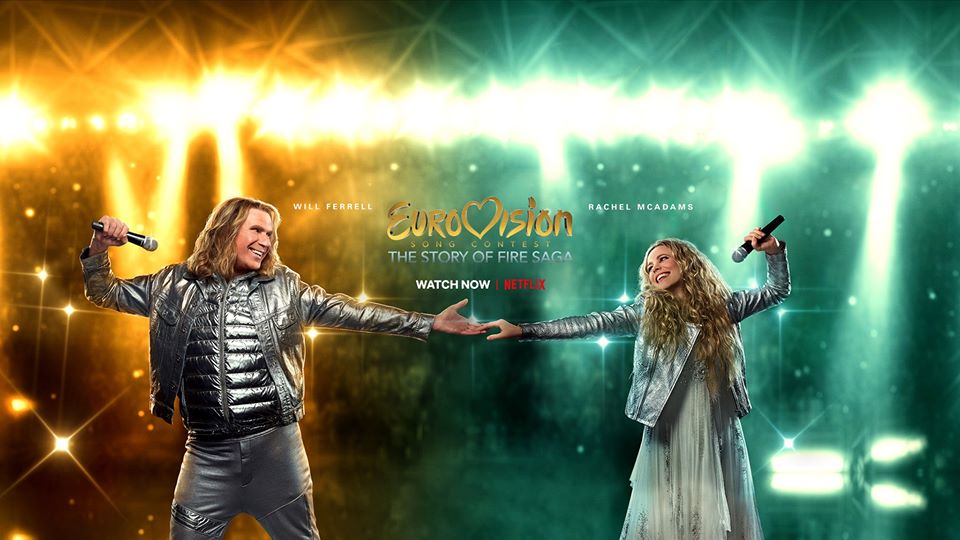 Written by susiecreasey
Published at 13:00 on 20 July 2020
Images by Netflix on Facebook , The Guardian

Eurovision Song Contest: The Story of Fire Saga could have been a brilliant film, but fails to create an impact. The Eurovision Song Contest is marketed as an annual singing contest which unites the countries of Europe, but it is perhaps more famous for its unabashed indulgence in gimmicky and melodramatic live performances. Eurovision entries from recent years have included suggestive butter churners (Poland, 2014) and a man in a giant hamster wheel (Ukraine, 2014). This small selection of performances highlights that when it comes to Eurovision, eccentricity is celebrated, and the more outlandish an act is, the better. As a result, Eurovision had the potential to provide rich source material for a comedy, but the film fails to capitalise on this, instead falling back on tired comedy clichés to fill its story.

The film follows the journey of musical duo ‘Fire Saga,’ made up of Lars Erickssong (Will Ferrell) and Sigrit Ericksdottir (Rachel McAdams), as they attempt to fulfil their childhood dream of representing Iceland at Eurovision. The unwavering determination that drives them to Eurovision is driven by Lars’ need to impress his stern father (Piers Brosnan). However, the father-son relationship is not explored thoroughly enough in the film to prevent Lars’ dreams of Eurovision fame appearing anything other than a mechanism to set the story in motion. The incoherent story resembles something a child might write for a creative writing homework assignment, relying on silly coincidences and mishaps to advance Fire Saga from rural Iceland to Reykjavik, then to the final in Edinburgh. Many scenes should have been edited out, such as Demi Lovato’s two inexplicable cameos as a ghost, which are entirely pointless and jarring. Subsequently, the film drags out tediously to over two hours long.

The Eurovision Song Contest itself is an acquired taste, and most people either love it or hate it, but irrespective of which side you fall under, Eurovision Song Contest: The Story of Fire Saga is sure to disappoint. While those who are fans of Eurovision may be drawn to this film expecting it to commemorate the joy and unity Eurovision brings to nations across Europe, its cynics might hope for a sharp satire that cuts through the contest’s unbridled optimism. Yet the film does not have a strong sense of tone, unsure whether to poke fun at Eurovision or celebrate it, it commits to neither angle fully, and the resulting product is a hodgepodge of bad comedy and a lacklustre story which fails to make a point. You will leave the film wondering what on earth you were meant to gain from watching it.

The film is meant to be a comedy, but it relies mostly on flat and uninspired jokes born from comedy genre clichés, and fails to raise a smile. Not even the star-studded cast (which includes Piers Brosnan and Dan Stevens) can coax a laugh from the poorly-written script. Moreover, the acting performances of the two leads are severely constrained by having to put on faux Icelandic accents and the effort strains their dialogue throughout. Ferrell remains well in his comfort zone as another clone of the juvenile male lead he usually plays. His character Lars is deeply unlikeable and lacks any defining personality traits other than stubbornness. As a result, it is hard to care about what is at stake for him during the course of the film

Despite her slightly dubious accent, McAdams does succeed in providing some depth to Sigrit,
despite the script giving her almost nothing of substance to work with. Sigrit is genuinely endearing; an eccentric yet talented singer, who talks to elves and has a quirky but admirable taste in fashion. However, the first half of the film demotes her to Lars’ unrequited love interest and cheerleader, who goes along with Lars’ pipe dream of winning Eurovision because she is madly in love with him, despite being a talented singer in her own right. The romance angle of the film never makes sense; although we are meant to root for him but Lars is bland at best, and the two actors have no on-screen chemistry. Although the ending partially redeems the unequal relationship between the two, it is frustrating that a plot line where Sigrit is defined by her relationship to Lars is even deemed necessary in the first place, as it is superfluous to the overall arc of the film.

Despite the film’s many pitfalls, it has some enjoyable moments in the form of the original songs and their performances. Just like the majority of modern Eurovision songs, they are generic euro pop and instantly forgettable, yet they captured the spirit of Eurovision more than any other aspect of the film. The opening dream sequence ‘Volcano Man’ so accurately depicts the costumes, lyrics, and flavour of a typical Eurovision offering. It could have been a clip taken from last year’s contest, and Dan Stevens performing as Russia’s entry perfectly caricatures the erotic undertones that so often permeate Eurovision acts desperate for votes. But this all seems like a pointless undertaking; the iconic television event of Eurovision already resembles a pantomime so much that it is impossible to mock the real acts through a simple imitation, as they are already jokes in themselves. The film needed something beyond mimicry to give it a comedic edge.

Perhaps the most dreadful moment in the film comes in the form of the tacky ‘Songalong’. This group karaoke moment (performed without a smidgeon of irony) that features cameos from past Eurovision winners such as Alexander Rybak and Conchita Wurst, who earnestly sing along to Cher and the Black-Eyed-Peas. Moreover, the only song featured which originates from Eurovision, ‘Waterloo’ by ABBA, is horribly re-imagined as a soulless dance track. The occasion is so cringe- inducing it is almost impossible to sit through.

Dedicated fans of Eurovision may enjoy this film as a nostalgia-inducing substitute for the real event which has been cancelled this year, however, the film does fail to truly capture the fevered dream (or nightmare, depending on your personal taste) that Eurovision is. The film has no clever angle to take, and the story is too bland, unfunny, and clichéd to be considered a proper tribute to the iconic event that is Eurovision.

Eurovision Song Contest: The Story of Fire Saga is available to stream on Netflix.

Looking for more lockdown movies? Check out these other articles from Redbrick Film:

Redbrick Picks: The Best Comedy and Family Movies for Lockdown