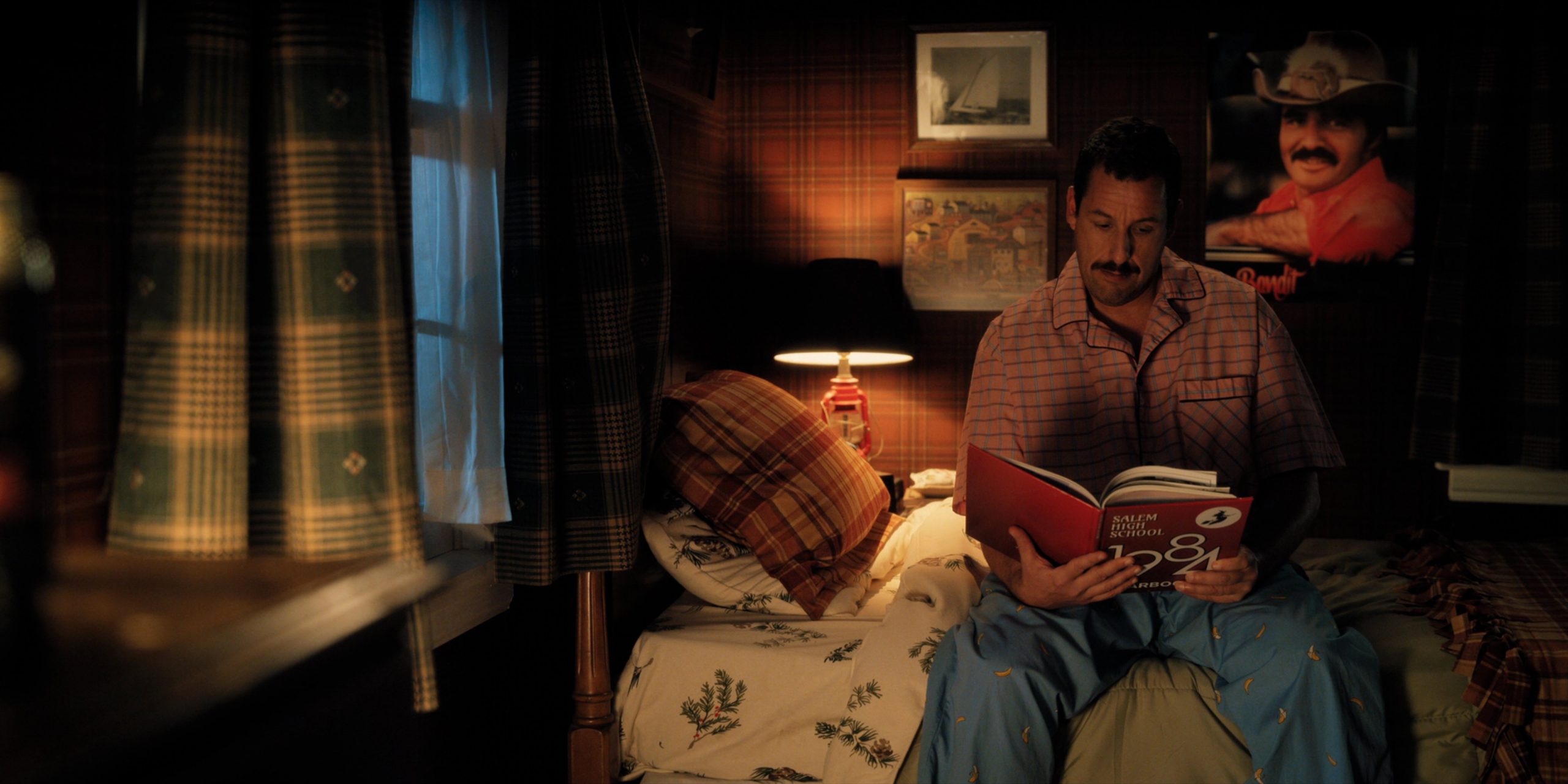 Film Critic Edie Dams admires the commitment made by Adam Sandler after his Oscars loss, but still finds joy in this horror comedy mishap

Written by Edie Dams
Published at 12:00 on 28 October 2020
Images by Netflix Film on Twitter

After missing out on an Oscar for his performance in Uncut Gems, Adam Sandler threatened to make the worst movie of his career. Steven Brill’s Hubie Halloween, then, as its immediate follow up, is a curious compromise; terrible, but not irredeemably so.

At its heart, the film is little more than a tale of good unexpectedly overcoming evil: Sandler plays Hubie, a deli employee in Salem, Massachusetts. As a self-appointed neighbourhood watchman, he is the victim of bullying and practical jokes by his neighbours and friends. On Halloween – treated like a national holiday in Salem – he must contend with an escaped patient from a psychiatric facility, a werewolf and a mysterious kidnapper in order to protect the town that hates him.

The film is a more imaginative and creative outing than his other recent efforts. Sandy Wexler and Murder Mystery – both part of Sandler’s infamous production deal with Netflix – were both passively funny in an unimaginative, flat kind of way. The comedy felt contrived and easy to anticipate. Hubie Halloween represents a colourful departure from this tired template, using a mystery narrative, practical effects, and hyper aestheticised Halloween set-dressing to draw out a real sense of fun. Its blatant refusal to take itself seriously – a climactic emotional confrontation near the end of the film, for example, undermined by June Squibb’s ‘Bonor Donor’ shirt – purposely bad visual effects, and Sandler’s bizarre accent, is what makes it enjoyable. Murder Mystery was bad in an unintentional, lazy way. It had no heart. It had never been clearer than Sandler was churning out low-budget comedies for the pay check. This film, at least, revels in its own surreal, bad quality; and has fun doing it.

One of the film’s real strengths is its adherence to a more traditional plot structure. Its mystery elements – like the three possible antagonists – allow moments of tension and conflict to feel earned. Having Sandler’s Hubie on the back foot for most of the narrative gives the otherwise slow plotting momentum. Yet this pacing is somewhat slow and becomes increasingly noticeable. The film drags for the first two acts and suddenly rockets to its conclusion in the last thirty minutes. As the story takes off, the film draws to a close, leaving audiences with a sense of potential and not much else.

The genre blend of horror and comedy work well as a vehicle for Sandler to effectively develop a quest narrative for his protagonist. For a film that tries to be as light-hearted as possible, the genuine anxiety that point-of-view shots create is unexpectedly effective. The camera frames the audience as the antagonist, creeping up on Sandler himself, or in one strangely distressing scene, neighbourhood children. The self-awareness of its own narrative – of both genre convention and Sandler’s own reputation – also gives the film a certain richness. Cheaper references, like the classic horror tropes it invokes, give the film an almost parodic quality. Rob Schneider’s Richie Hartman is essentially a Michael Myers stand-in, whilst the cornfield kidnapping scene would not feel out of place in A Quiet Place. Cameos like Ben Stiller’s appearance from Happy Gilmore, and Tyler Crumley’s passing reference to Billy Maddison demonstrate that this is a film for real Sandler fans – and are strange enough without context to be enjoyed by an uninitiated audience member.

The performances are compelling, and as a result the film is strengthened by a wider cast of comedic acting talent. Steve Buscemi stands out in particular as Hubie’s lycanthropic neighbour Walter Lambert. The enthusiasm Buscemi seems to have for the part – in throwing himself around, leaping out of windows, and craving physical contact – is as funny as it is uncomfortable. This is true of many of the performances. Every actor seems happy to be there and, as such, the cast benefits from a genuine chemistry. The constant hyperbolic rage of Kevin James’s police chief Steve and Ray Liotta’s Pete were, for example, a little grating, but worked well for the physical comedy and complemented Sandler’s equally extreme acting choices. Sandler is at his best when he is being thrown around by the other characters or narrowly avoiding having large objects thrown at him, and it is these jokes that are heightened by the involvement of others.

Unlike the more recent entries into Sandler’s canon of gross-out comedies, Hubie Halloween has moments of heart and sincerity. Whilst Liotta, Buscemi and a flamboyant Maya Rudolph never take their roles too seriously, June Squibb (as Hubie’s mother) and Julie Bowen (as Hubie’s love interest, Violet) provide restrained performances that succeed specifically because they are so detached from the weirdness of the rest of the film’s narrative. Bowen is especially effective in making Sandler’s comedy go further, delivering, for example, romantic dialogue that doesn’t flinch away from or react to Hubie’s digestive and social difficulties.

The film’s comedy, although persistent, is not always forgivable. Recurring visual gags – like the neighbourhood children consistently throwing buckets at Hubie, or his reality-defying, multi-use thermos – tend to tread the line between stale and sharp comedy. The same could be said of Shaquille O’Neal’s voice-swapping cameo, which is initially entertaining – O’Neal being a very talented comedian – and then quickly becomes tired as the scene plays out with competing bizarre voices and no clear punchline. The film is further weakened by its reliance on racist tropes arguably seen in the depiction of Louise and Dave, a local farmer couple who only seem appear onscreen to aggressively argue. The film relegates its few actors of colour to roles limited by minimal dialogue and problematic stereotypes.

Sandler brings the same energy to Hubie Halloween that he previously brought to his collaboration with the Safdie brothers in Uncut Gems, but none of the precision. This is most obvious in his vocal performance, where Sandler affects a kind of muffled child’s voice, obscuring most of his dialogue in the film. That said, the script – of which Sandler was a co-writer – works to his advantage. He is stubborn: the constant victimisation of Hubie becomes funnier as the film progresses. A joke sometimes has to be repeated four or five times in different contexts before it lands – but even the accent feels organic by the final act.

This film is messy enough to be Sandler’s promised revenge on the Academy – but it is still muted and ‘low enough’ that in the final scenes of the film, there is an inexplicable desire for more. Whilst it is a fine effort, this is not the worst film ever made; this is not even the worst film Sandler has ever made.

Hubie Halloween is available to stream on Netflix.

Looking for more creepy features? Some tricks and treats? Check out these other articles from Redbrick Film: