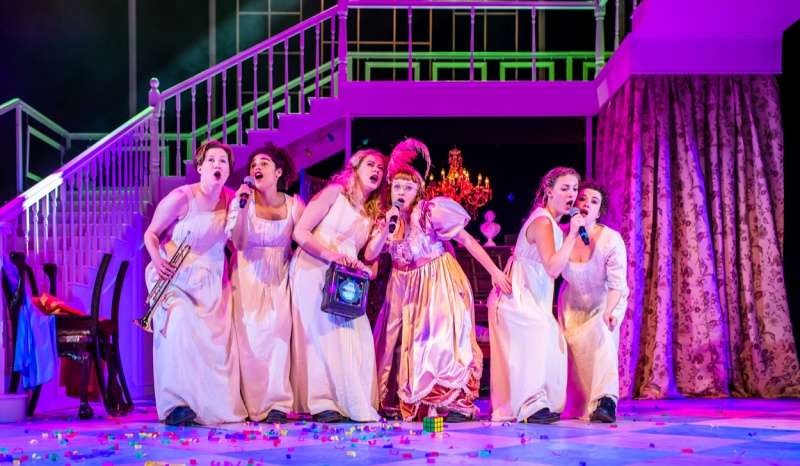 Review: Pride and Prejudice (Sort Of)

Culture’s Elizabeth Carpenter reviews ‘Blood Of The Young’, an unconventional adaptation of a Jane Austen classic 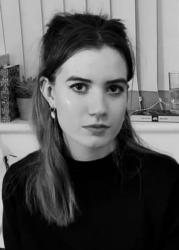 Elizabeth Carpenter
Third Year. Drama and English. Lover of Jane Austen, Sally Rooney and the films of Luca Guadagnino. Find me riding a pink bicycle across campus.
Published at 18:00 on 11 November 2019
Images by The Birmingham Repertory Theatre

It is a truth universally acknowledged, that it is impossible to begin a review of Pride and Prejudice without some playful variation of that recognisable opening line. As a national literary icon, the stage and screen adaptations of Austen’s work are countless, but few do her genius justice. The stereotypical renditions that come to mind feature annoyingly beautiful actors clad in bonnets and breeches, chocolate-boxy film locations and stilted dialogue delivered in perfect received pronunciation. I can’t help but consider what Austen herself would have thought. A harsh generalisation maybe, but adaptations such as these have given her work a reputation for being highbrow love stories about rich people living in stately homes. Read the books and you will realise that this is totally false. Pride and Prejudice is an observational masterpiece; a hilariously sharp-witted account of five sisters living vicariously through the men in their lives, in a society which is set against them at every turn.

Blood of the Young catches the essence of this in their new stage adaptation Pride and Prejudice* (*Sort of). Adapted by Isobel McArthur, this version remains entirely faithful to Austen whilst transcending the time period. This is a world where Doc Marten boots peak out from beneath regency gowns, Mrs Bennet lays across a velvet sofa scoffing Quality Streets and the five sisters tell each other to f*** off whilst discussing the possibilities of escaping a life of waiting. This is no stuffy period piece. This is a raucous and energised breath of fresh air, which truly does Austen’s novel justice.

Directed by company leader Paul Brotheson, it began its life at the beginning of the year as a collaboration between theatre company Blood of the Young and The Tron Theatre in Glasgow, opening to rave reviews and award nominations. The tour began last month at the Old Vic in Bristol and it is now embarking on its second week at the Birmingham Rep. Having only read the novel for the first time in recent years, McArthur went into the writing process without a longstanding connection to Austen’s work. Her newcomer eyes are evident in this fresh take on the classic.

Adaptations rarely fail to match the book. It’s an age-old debate. So, when making the bold decision to watch a theatre adaptation of a classic novel, I plead for it to give me something new. After all, we could just curl up and read Pride and Prejudice from the comfort of a sofa, knowing that we are getting the real Austen deal.  To combat this problem, McArthur has taken a risk by giving the narrative voice to those who are not given one in Austen’s text. The servants. This makes total sense. These are the people who are flies on the wall during family dinners, who listen to the sister’s gossip as they do up countless corsets; these women (yes – male servants were few and far between due to ongoing war) know the private lives of the Bennet’s like nobody else.

Six actors play the servants, who enact the parts of the people they serve and literally tell the story, moving the furniture and throwing props to each other.  In an industry which is inherently sexist and undoubtedly tougher for women, watching an all-female cast own the stage makes me want to leap up in empowered admiration. The company is insanely versatile, seamlessly multi-rolling between characters, making each as bold and believable as the other. Hannah Jarrett-Scott sets the bar high, playing both Mr Bingley and his snooty sister Caroline. Jarrett-Scott’s Bingley is straight out of Made in Chelsea and is the epitome of the empty headed but well-intentioned posh boy – too much money to know what to do with, ‘so let’s throw a huge party in my mansion!’. In stark contrast, her Caroline is a ‘rich bitch’ who has to be the centre of attention – particularly Darcy’s (earning perhaps the biggest laughs of the show).

Equally as fun is writer-come-actor Isobel McArthur’s Mrs Bennet. She is a true matriarch – her aim in life is to see her five daughters sufficiently hitched. She is either flustered, chasing after the girls like a mother hen or collapsed on the chaise longue, simultaneously puffing on a cigarette and an inhaler. McArthur also doubles up as the enigmatic Darcy, playing him with a frustratingly sexy, awkward arrogance. But this play is not about the men. Mr Bennet does not even feature – or he does, but from the comfort of his armchair hidden behind a book, where he stays throughout the mayhem.

The female cast proves that it is the women that own this narrative. Perhaps a shirt-soaked Mr Darcy is the first image that comes to mind when Pride and Prejudice is mentioned, yet it is Elizabeth Bennet who is the spirit at the heart of it. Meghan Tyler’s Elizabeth has an irreverent attitude which certainly earns the term ‘spirited’, as she sings the Carly Simon hit ‘You’re So Vain’ to Mr Darcy at the town ball, whilst stood on a beer crate. Did I not mention there is karaoke? There is, and it works brilliantly. The servants carry around mics which are spontaneously handed to the characters who then break into song. Rather than dance together, Mr Darcy and Elizabeth are forced to sing a duet. From Carol King to Candi Stanton, each tune is a retro banger. The combination of regency period features and contemporary pop culture makes for a colourful aestheticism, but also drags the story right up to date. As Elizabeth bites Hoola Hoops off her fingers in boredom at the ball, we are reminded that she is not so far removed from us as we might think.

Luckily today, the pressure of marriage and the impending doom of spinsterhood is not so ominous. For the Bennet sisters the stakes are really high and you feel their frustration. Mrs Bennet may exaggerate when threatening that they will be forced to live on the streets if they do not marry, but then again, the alternative of a life stuck at home sewing by the fire does not sound like much fun either. Amongst the hilarity there are moments of darkness. Hannah Jarret-Scott’s Charlotte Lucas is poignantly sad.

Despite this, the tone of this take on Austen is one of unsuppressed laughter. Pride and Prejudice is at its purest a romantic-comedy, a satirical social commentary on the politics of match-making. ‘I could have died laughing!’ exclaims Lydia Bennet in Austen’s novel – and I did, when Jane throws up in a vase after too many drinks at the Netherfield ball, in McArthur’s adaptation. If like me you are an Austen enthusiast, you will love this production. If you are not, you will almost definitely still love it and then become one. Next time I read Pride and Prejudice it will be to ‘Young Hearts Run Free’ playing in the background …