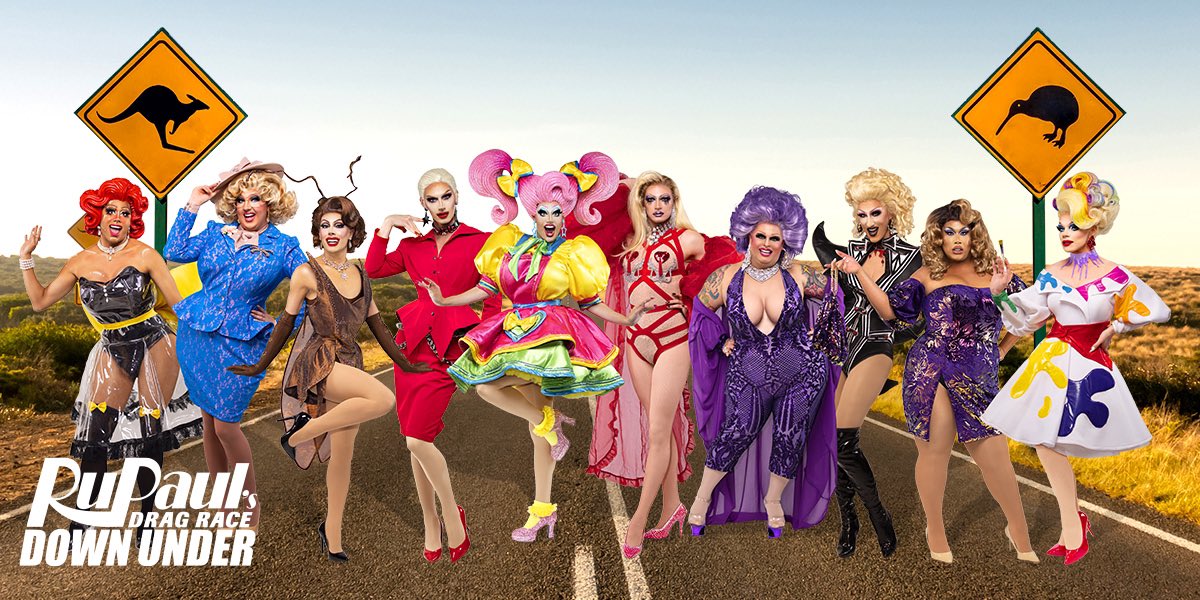 Review: RuPaul’s Drag Race Down Under

TV Writer Aaliya Afzal reviews one of RuPaul’s Drag Race’s most controversial seasons yet, delving into the good, the camp and the ugly

Written by Aaliya Afzal
Published at 13:10 on 2 July 2021
Images by @ZahoJojo on Twitter

With the finale of RuPaul’s Drag Race Down Under airing on BBC iPlayer, the series saw Kita Mean crowned as the first ‘Down Under’ queen. The series contained all the signature Drag Race shade, sequins, splits and crude humour. However, there was also a great discussion of sensitive issues – including the backlash faced by Scarlet Adams, who was called out for doing blackface in the past. This controversy caused some Twitter users to call for her to be disqualified.

The controversy was addressed in Episode Five, when the queens were shown getting ready for the runway after completing a commercial for their branded products. After bringing up the incident, Scarlet expressed her “regret” and described how she felt “disgusted” at herself for the action. She explained how her intentions were purely for comedic pursuit – however, the other queens, notably Etcetera Etcetera and Art Simone, argued that they found it “strange” and quite astonishing that Scarlet did not comprehend the racist and harrowing history of blackface. Scarlet also touched on the prejudiced rhetoric “ingrained” into her as a child, with Maxi Shield chiming in about the casual racism she was surrounded by as a child in Central Queensland. This exchange on Drag Race Down Under sparked a conversation on the legacy of racism and intolerance in Australia.

Despite calls for Scarlet to be immediately eliminated from the show, RuPaul expressed how he did not wish to “cancel” the queen but hoped to use the incident as a “lesson in humility and accountability”. So, comes a divisive question that reality shows have continually faced: should contestants be thrown off for racist actions plaguing their past? Or should we take a leaf out of RuPaul’s book and allow them to apologise and move on from such so-called mistakes? In February of this year, photographs emerged showcasing Rachael Kirkconnell, a contestant on The Bachelor, at an antebellum themed fraternity formal in 2018. This shows that this question remains relevant and yet no less contentious. Either way, it is crucial to seek out the voices of members of the community directly implicated in the incident at hand and in this context, spotlight the centuries of systematic oppression endured by black individuals.

Besides the controversy surrounding Scarlet, Drag Race Down Under also brought to light the history of British imperialism and the possession of Indigenous land. Outspoken Indigenous queen Jojo Zaho made a statement about the grave injustice while strutting down the runway wearing an outfit with the words “Always Was, Always Will Be” on the back of their garment. Although Jojo was first to be eliminated following a lip-sync against Elektra Shock, the ‘lip-sync assassin’ of the season, the statement has touched viewers as powerful. Other topics discussed by the queens include experiences of transphobia and homophobia, family tensions, estranged father relationships and grief amongst other things. This revealed the more serious side to Drag Race that balances the wit and light-hearted aspects of the show.

Overall, I liked the mix of satire alongside the discussion of important and personal issues in Drag Race Down Under. Whilst I respect RuPaul’s choice to permit Scarlet the opportunity to confront her past, I could not help but feel uncomfortable as it was addressed in a single episode and not mentioned any further. Scarlet made it to the final – in fact, she scored the most wins of all the queens. At this stage of the competition, the queens faced a one-on-one conversation with RuPaul and Michelle Visage. Think of a Piers Morgan or Oprah Winfrey interview that involves tapping into the most personal parts of someone’s life. And yet, Scarlet’s racist past – multiple photos have been released showing her not only in blackface but in a burqa and appropriating the clothing of other cultures including Native Americans and people of Asian descent – and the outrage this caused was left glaringly unmentioned.

Many believe that Scarlet was due to win Drag Race Down Under, but the crew may have decided against this because of the criticism this would raise. Whether this is likely or not, numerous people were happy to see Kita Mean crowned as evidenced by the countless memes and gifs on Twitter showcasing relief that the “non-problematic queen” of the season had triumphed. So begs the question, what can we do when faced with a reality star with a controversial past? How effective is cancel culture? Which voices can we highlight in cases like this and what can we learn? And how should such instances be dealt with in the future?

Like this? Check out more Drag Race-inspired articles here:

Do Drag Queens Fit in Eurovision? (Of Course They Do)