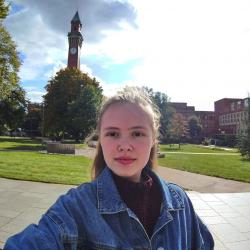 Sapphic (also known as WLW – woman loving woman): refers to a woman, woman-aligned and/or non-binary folken, who is attracted to women, exclusively or not. They may or may not be attracted to other genders as well.

It is a commonly believed myth that no good sapphic fantasy books exist. So common that it has inspired a booktok trend which recommends if a book is ‘sapphic and it slaps’, which aims to show readers sapphic books which are genuinely worth the read. Here are four books that I would recommend to a person who is looking to delve into the realm of sapphic fantasy.

Crier’s War is a young adult fantasy duology set in a world where Automae rule over humans. The story focuses on two girls: Ayla, a human girl who seeks revenge against the Automae, and Crier, an Automae who is the Sovereign’s daughter destined to take over the estate. Their lives intertwine in an unexpected way when Ayla bears witness to an accident that happens to Crier, and becomes Crier’s handmaiden.

The politics of the world that Varela created are intriguing and I enjoyed the fact that Automae felt like fantastical rather than scientific beings despite meaning to resemble cyborgs; however, the driving force of the plot is certainly the relationship between Ayla and Crier. This book will therefore probably be best enjoyed by those who enjoy romance-led novels with not too complex and overwhelming world-building.

Malice is a Sleeping Beauty retelling in which the princesses of Briar are cursed to die when they turn 21 unless the curse is broken by a true love’s kiss. The main character, Alyce, is a Dark Grace, a magical being whose powers can only cause harm. Alyce is a morally ambiguous character, who was forced into a life of solitude due to her dark powers. In the novel, we follow Alyce’s attempts to find out more about her powers, and we see her journey intertwine with Aurora, a princess who only has one more year to find her true love, but is intent on finding another way of breaking the curse. This novel is marvellously dark and twisted, and it presents magic and its uses in an incredibly unique way.

I recommend this book to anyone who enjoys villainous main characters and plot-twists which have them gripping onto the edge of their seats.

The Jasmine Throne by Tasha Suri

The Jasmine Throne is the first book in the Burning Kingdoms trilogy. It is set in a fantastical world inspired by Indian history and folklore and follows the story of two women: Malini who is imprisoned in an ancient temple for treachery, and Priya, a maidservant who has to clean Malini’s chambers every night and who harnesses secret magical powers. When Priya’s secret is exposed to Malini, they join forces to fight for their freedom and transform the empire.

This is a tale of a lush world and powerful women, and would be a great read for those looking for a tale of female empowerment, which includes a deep, slow-burn romance.

The Priory of the Orange Tree by Samantha Shannon

The Priory of the Orange Tree is an adult fantasy novel following the paths of many different characters, whose lives intertwine. It is a story of queendoms, dragons, magic, carefully crafted religions and political intrigue and includes complex world building and unique characters. The romance in this book is between two of the main characters, and although it is not the main driving force of the book, it becomes a very important part of the story towards the second half, with many things going differently than planned due to the characters’ feelings for each other.

I recommend this book for those who enjoy complex, high-fantasy worlds, with a romance that is not the focus of the book but instead comes around as a result of the main story.

Book Wormhole: The Priory of the Orange Tree

Contemporary Romance Novels to Fall in Love With