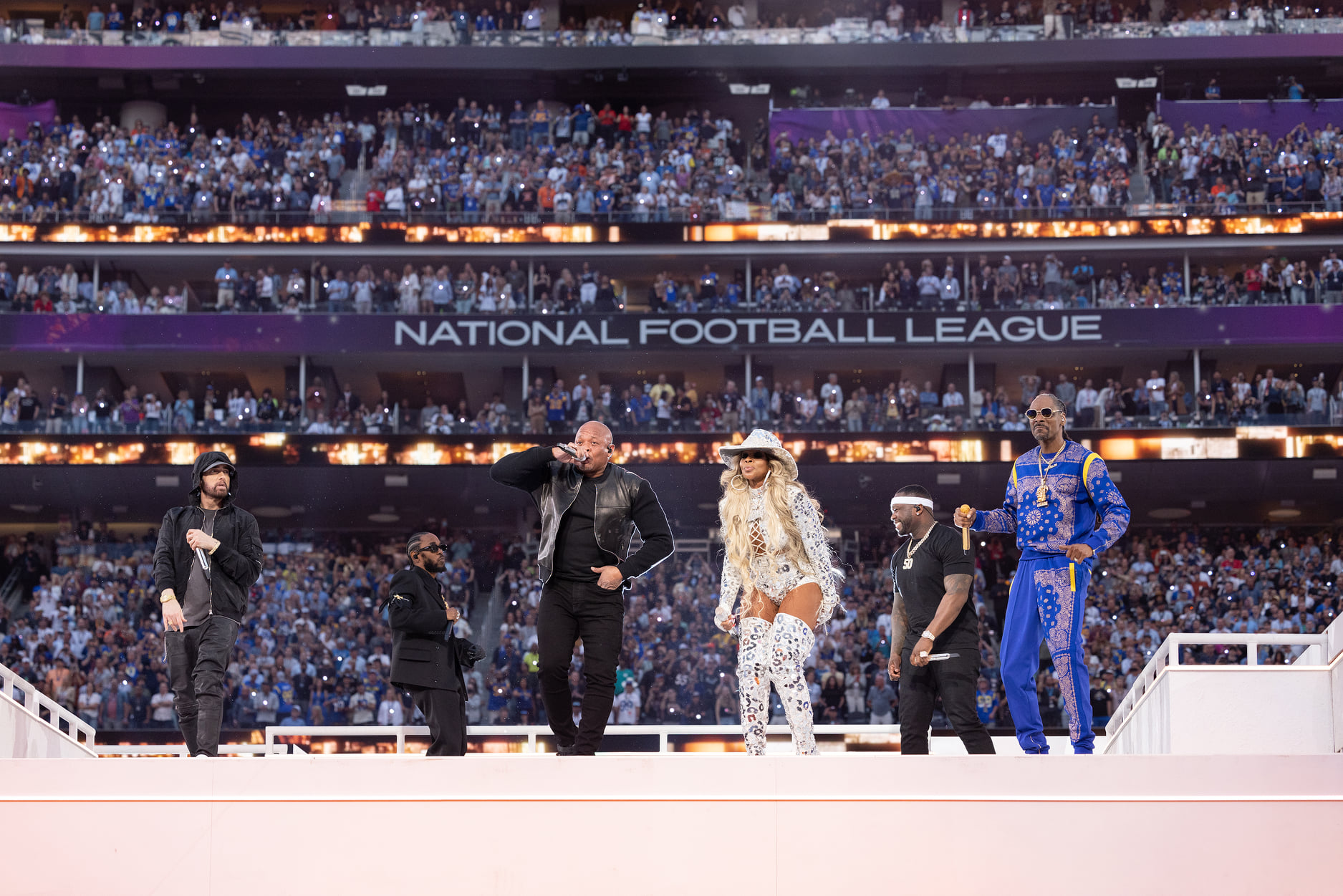 Commenting that it has set the standard for Halftime Shows in the future, Music Critic Bas Bevan explores the 2022 Super Bowl performance

The Super Bowl Halftime Show is traditionally a staple of one of the biggest events on the sporting calendar and sometimes can overshadow the game, especially to outsiders of American football and the NFL. With over 100 million viewers the pressure could not be higher as disappointing performances have lived long in people’s minds. However, for Super Bowl 56 between the Cincinnati Bengals and the hometown Los Angeles Rams in the newly built SoFi Stadium it can confidently said that it was an overwhelming success.

The line-up featured West Coast rap pioneer Dr. Dre and a team of his most popular collaborators including Snoop Dogg, Eminem, Mary J. Blige, and Kendrick Lamar, who are also global stars in their own right. Unsurprisingly this announcement created very high expectations but the show definitely lived up to and in some ways exceeded them.

Dr. Dre and Snoop Dogg opened the show with their track ‘The Next Episode’ from Dre’s 1999 album 2001, and the West Coast anthem ‘California Love,’ a track by Dre and the late 2Pac. Starting with such well-loved songs ensured that none of the 15 minute slot was wasted and that the show was enjoyed as much as possible from start to finish. The whole performance took place on top of several white buildings modelled on houses as well as some Compton landmarks, including the club Eve After Dark where Dre worked as a DJ, with a map of LA on the floor and low riders parked outside. Like the music, the set put the spotlight on Los Angeles and likely helped create a feeling of familiarity in a new stadium and for a team that returned to the area relatively recently. After the Rams’ came back from being four points down with six minutes left, some of the credit for their victory could arguably be given to the inspirational and Southern California themed halftime show.

In a surprise addition to the performance 50 Cent, who was also discovered by Dr. Dre, then appeared to cheers from the crowd, suspended from the ceiling to perform his party classic ‘In da Club.’ His inclusion alongside Snoop Dogg and Eminem illustrated just how much influence on popular music Dr. Dre has had through finding new artists as well as through his own work.

The 90s and 00s nostalgia trip continued with Mary J. Blige adding some R&B songs to a performance abundant with hip hop royalty. She sang ‘Family Affair,’ which was co-written and produced by Dr. Dre, accompanied by several backing dancers followed by ‘No More Drama’ which focused the spotlight more on her to show off her legendary vocal ability.

The next all-star rapper to appear was Kendrick Lamar. As well as representing the modern generation of rappers he brought more energy and intensity to the overall more laid-back show. He was dressed along with his back up dancers in an all-black suit, they also wore sashes with ‘Dre Day’ written on them. He performed his 2015 song ‘Alright’ and ended by rapping ‘35 summers in the making, stop thinking you forgot about Dre’ which transitioned into the start of ‘Forgot About Dre’ with Eminem appearing from one of the buildings.

He performed arguably his biggest hit ‘Lose Yourself,’ with its motivational message being very suitable for the Super Bowl. He was joined on stage with a full band featuring Anderson .Paak on the drums and Dre appearing to control the backing track from behind a giant white mixing desk.

After playing its iconic intro on the piano, Dr. Dre performed ‘Still D.R.E’ with Snoop to end the star studded performance with all of the artists appearing together at the end. Like the halftime show as a whole, the song was testament to the influence and success of Dr. Dre. Although he wrote the song in 1999 to let the world know that he was still at the top of his game, the lyrics rang true today through the presence of the many artists he helped catapult to worldwide success as well as how he was the focus of much of the performance.

This year’s Super Bowl Halftime Show seems to have set the standard for years to come thanks to the unparalleled array of talent it featured and how it not only provided entertainment but also celebrated the culture of LA and its musical icons. It told the story of hip hop music since the mid-90s both on the West Coast and throughout America through Dr. Dre and some of his most famous collaborators with the surprise appearances from 50 Cent and Anderson .Paak adding extra excitement. The simplicity of the performance compared to previous halftime shows ensured maximum focus on the artists and the music with the set and back up dancers enhancing the show and making it dynamic without taking attention away from it. After its reputation has been damaged for various reasons over recent years the Super Bowl 56 Halftime show may have revitalised the concept and, if this year’s form is continued, returned it to its place as one of the most anticipated and high-quality entertainment events of the year.