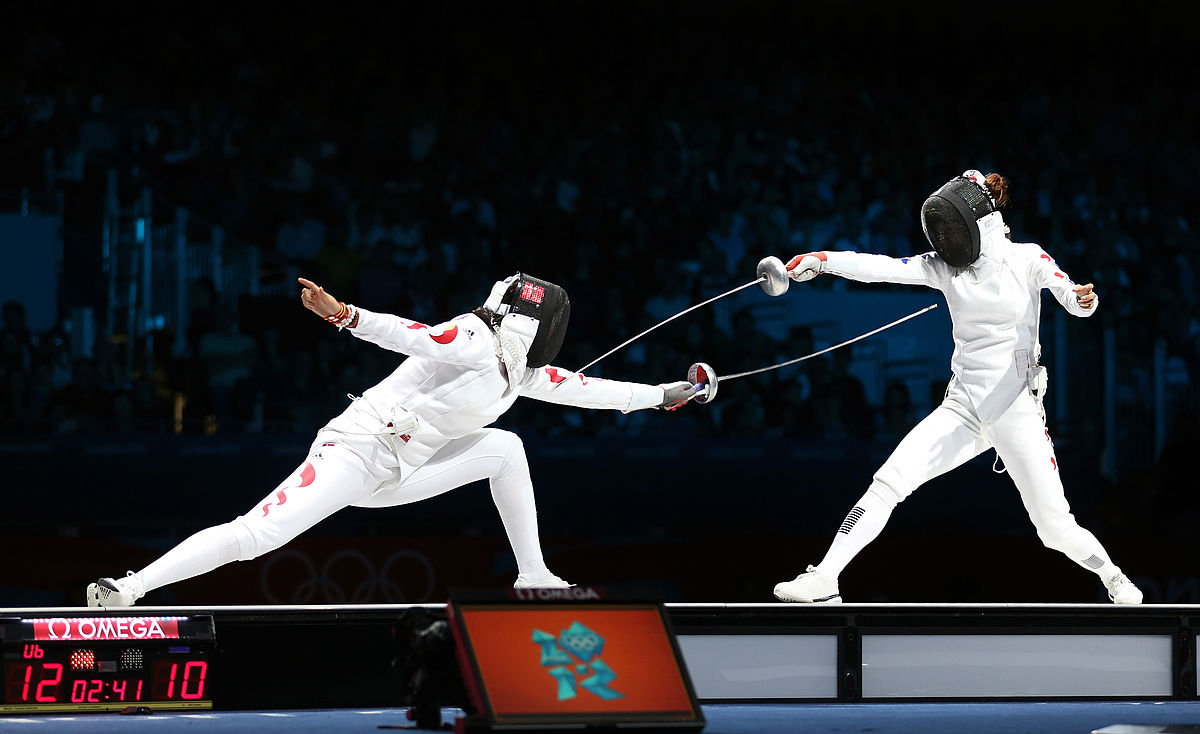 Sport Writer Charis Gambon discusses the history of fencing, reviewing how the sport has developed since its creation

Written by charisGambon
Published at 09:00 on 18 February 2022
Images by Korea_London_WomenTeam_Fencing_01 by Korean Olympic Committee on Flickr , CC BY-SA 2.0

Modern fencing dates from the late 15th century when civilians began carrying swords for the first time. Prior to the 15th century, fencing was seen as a form of military training for soldiers. The original civilian choice of sword was the rapier, which was used more for cutting than thrusting. Spain introduced the rapier first, followed by Italy shortly after, and then the rest of Europe. Rapier swords were one metre long and weighed about a kilogram. With the rapier, the non-sword arm was used for defence and the opposite foot to the hand holding the sword was advanced.

From around the year 1640, light swords with short, flexible, pointed blades began to be used as a direct response to new fencing techniques which emphasised thrusting at speed rather than the previous tactic of cutting. The new lighter sword was seen as highly dangerous as masks for fencing had not yet been invented.

Flexible foils were developed as a way to demonstrate the skills of swordplay in relatively safe way in response to previous issues of safety. The button on foil was originally wrapped in leather to the size of a musket ball due to the danger of getting one in the eye. Fencing masks were invented in the later half of the 18th century to combat this problem.

In the 18th century many of today’s rules for foil were instigated, for example having only the torso as the valid target, and the following of the strict sequence of attack, parry, riposte. The invention of right of way brought in order to the sport of fencing and made establishing points easier. It also became part of the rules to allow the attacker to recover to the on guard position after a riposte in order to avoid ‘getting one in the eye.’

Fencing foil quickly became part of a gentleman’s education as it was a stimulating academic exercise alongside the traditional dancing and music teaching. Fencing masters would teach young gentlemen foil as it was seen as a genteel art.

With the invention of the mask a generation later, masters realised that they provided an opportunity to exploit the demand for speed and mobility as well as grace and accuracy of movement. The wearing of a mask allowed for an implementation of an instant parry-riposte system which played a significant part in creating this increase in access to speed and mobility.

Experiments with electrical systems took place from the 19th century and a demonstration of the system was held on 24 June 1886 by Mr Little. However, development of electrical fencing was incredibly slow and did not gain official recognition until 1933 – and that was purely for épée. Originally there was an issue with on and off target hits with Foil which is why electric foil was not used until a later date. This issue was resolved in 1955 and since this date electric foil has been used in fencing.

Increase in gamesmanship has led to a whole new category of penalty hits in more recent times both for the safety of the fencers and to promote fair sportsmanship. Examples of these include the outlawing of turning your back on an opponent to protect the head, stepping off of the piste without permission and covering your scoring area with your hand.

In the current era, fencing swords are being manipulated at such immense speed that fencers do not have time to watch an attack developing or decide how to deal with it. Due to this, fencers have to react instinctively, parrying and hitting with movements that come automatically from learning and practicing.