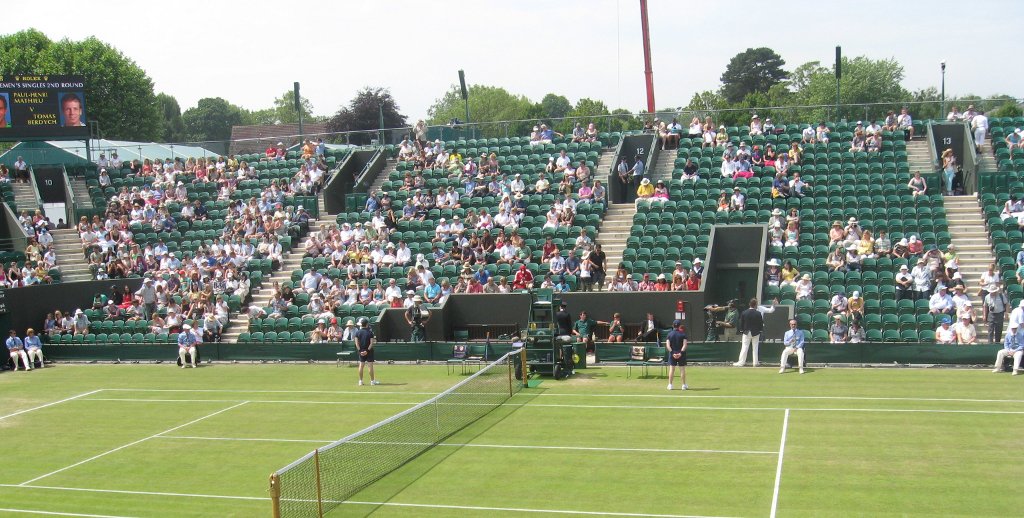 Will Rogers
Hi! I'm Will. I'm a third year history student at the University of Birmingham. My main hobbies are playing squash and dodgeball and I also enjoy reading about history, geography and sport.
Published at 11:00 on 19 July 2021
Images by Wikimedia Commons/samcgivern

Following last year’s cancellation, Wimbledon made an emotional return to SW19, with the world’s greatest tennis players heading to the world’s oldest tennis tournament. Following months of meticulous planning, the immaculate courts welcomed the players and, despite the classic British summer weather, the championships began with as much excitement as any in living memory.

In normal tradition, the reigning men’s champion, Novak Djokovic, opened on centre court in front of a crowd that included several NHS workers. Shockingly, he lost the first set to the 19-year-old Brit, Jack Draper, before eventually coming through to win in four sets. 8-time champion Roger Federer struggled against Adrian Mannarino but, at two sets all, the Frenchman had to retire with injury, allowing Federer into the second round at his 22nd Wimbledon. Elsewhere, there was a shock as French Open finalist Stefanos Tsitsipas lost to Francis Tiafoe whilst Andy Murray, playing in his first Wimbledon since 2017, beat Nicoloz Basilashvili in four sets.

On the women’s side, world number one Ashleigh Barty beat the retiring Carla Suarez Navarro in an emotional match after the Spaniard returned following almost a year out with cancer. Serena Williams put in a valiant effort before retiring with injury, yet her sister Venus dug deep to overcome Mihaela Buzarnescu. Meanwhile, British teenager Emma Raducanu wowed the crowd, beating Vitalia Diatchenko in straight sets.

The second round saw comfortable wins for Matteo Berrettini, Alexander Zverev and Daniil Medvedev. The remaining British trio all won in varying circumstances with Dan Evans and Cameron Norrie winning in three sets. However, Andy Murray had to dig deep to beat German qualifier Oscar Otte in a marathon, five set match under the roof on centre court.

Barty and Aryna Sabalenka both won with ease, yet there were upsets as Elina Svitolina and Sofia Kenin were defeated. Raducanu continued her stunning form in beating former French Open finalist Marketa Vondrousova in straight sets. The match of the round, and arguably the championships, was a 3-hour epic between Angelique Kerber and Sara Sorribes Tormo, with the German emerging victorious.

In the third round, the British hopes on the men’s side were ended, with Norrie putting up a brave fight against Federer, whilst Murray was beaten by the rising star, Denis Shapovalov. However, there was still a British singles participant as Raducanu won again in straight sets. Ons Jabeur continued her great story, making the deepest Grand Slam run of any woman of Arabic origin after beating Garbine Muguruza.

Manic Monday saw some epic matches on the men’s side of the draw, the favourites Djokovic, Berrettini and Federer all winning convincingly. Karen Khachanov won a phenomenal final set containing thirteen breaks of serve against Sebastian Korda, whilst there were shocks as Zverev, Medvedev and Rublev were defeated in five sets – one tournament too many for the three young lions. For the women, the round was extremely comfortable for many stars, yet Raducanu’s fairy tale ended abruptly as she retired of breathing problems. Her performance has inspired many youngsters and there is no doubt that she will be back for many more tournaments in the future.

As the weather improved, Djokovic continued his fine form in defeating Marton Fuscovics with ease. Shapovalov and Berrettini won excellent matches, whilst Federer was crushed by Hubert Hurkacz in straight sets, including Federer’s first ever 6-0 set defeat at Wimbledon. There were four straight set matches for the women, with Barty, Kerber, Karolina Plíšková and Sabalenka all coming through unscathed.

With a capacity crowd on centre court, Djokovic beat Shapovalov in straight sets, despite a promising performance from the young Canadian. Queen’s Club champion Berrettini continued his fine summer, beating Hurkacz and putting himself one win away from completing the famous double. The women’s semi-finals were of the highest quality with Barty and Kerber fighting for every point until the Australian eventually broke through. The other match saw two power-hitters knock seven bells out of each other for over two hours, with Plíšková emerging victorious following an enthralling match.

The women’s final pitted two of the world’s best players against each other. Barty entered the match as the slight favourite and, after a gruelling match with three tight sets, Barty won her first Wimbledon title. Describing the victory as “a dream”, she became the first Australian champion in forty-one years. This match was the first time since 1977 that the women’s final had contained two debutants, yet Barty’s accuracy and powerful groundstrokes allowed her to win her 2nd Grand Slam title.

For the men, Djokovic, playing in his 30th final and 7th in London, won in four sets against the powerful Italian who saved two match points but could not stop the great Serb from joining Nadal and Federer on 20 Grand Slams. Djokovic also completed the third part of his Golden Slam, with just the Olympics and the US Open still to come in his search for Greatest Of All Time (GOAT) status.

After Barty and Djokovic’s triumphs, the numerous great matches and the British performances, this tournament will be remembered for the return of Wimbledon and its fans. As capacity crowds once again graced one of the greatest arenas, sporting fans can only hope that it continues long into the future.