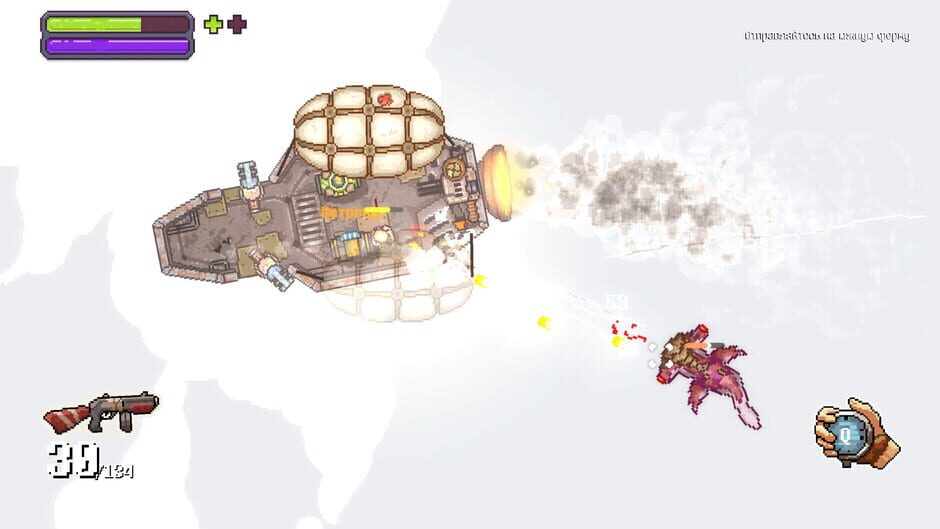 Written by Dan Jenkins
Published at 12:30 on 6 April 2021
Images by Hungry Couch Games

Disclaimer: Black Skylands is unfinished so is subject to changes. The initial release for the game is June 2021.

I was recently fortunate enough to be able to take part in the open playtest for Black Skylands, the debut title by Moscow based developer Hungry Couch Games.

Before I start, it would be remiss of me to not mention just how cute the developer’s logo is, which is something that translates over to the game too – all this is an incredibly inefficient way of saying that Black Skylands looks gorgeous. Unfortunately, this leads to one of my major complaints, that the cute artstyle, gentle colour palette, and relaxing JRPG style music are completely at odds with the level of violence in this game; enemies will explode into red mist upon being struck with anti-vehicle weaponry, and the protagonist’s portrait bloodies upon taking damage in much the same way the Doom Guy’s face did back in 1993.

Aside from that, Black Skylands is great. It represents something of a unique mash-up between Sunless Sea and Stardew Valley. Although unlike these games, the emphasis here is more on combat than role-playing, with the player drifting around enemy ships to land devastating salvos before disembarking to fight infantry stationed on the floating islands that make up the world. Alternatively, you could opt to shell the beaches(?) from your ship in a way that’s reminiscent of the deliberate power-imbalances that Titanfall 2 created.

Meanwhile, back on the farm, the gameplay is fairly light but still provides a lot of opportunity for the customisation of your home-base, which is just a bigger airship. Unfortunately, character interaction is mostly absent, being reduced to a couple of dialogue choices here and there, which seem to have little bearing on the manner in which the game progresses. Ultimately, I would rather that the protagonist had a stronger voice than being given the option to choose between several ultimately meaningless dialogue choices.

Another issue with the story is that the game’s inciting incident is the player character’s home being raided by pirates, which inspires her to liberate the surrounding islands from those same pirates. This takes the form of raiding and looting islands in a way that one might describe as piratical. But hey, you put a blue flag on the island instead of a red one, so it’s liberated right? Thankfully, floating peacefully from combat encounter to combat encounter and turning areas of the map a different colour is an activity that can be done without having to intensely grapple with morals of the situation.

Some part of me wonders if the game might have been a better experience all around if the combat were excised and the game reduced to a kind of skyborne Tradewinds, but it would seem a waste of the very excellent airship drifting to do so, and regardless of my reservations, I am very much looking forward to seeing the final product.

Thank you for reading this piece! Check out more from Redbrick Gaming here: