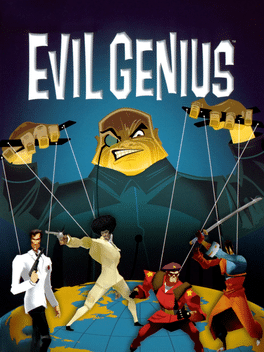 Amid the release of a sequel, Dan Jenkins plays and reviews 2004’s Evil Genius, to understand what makes the title unique and interesting

Given the release of Evil Genius 2 is just around the corner, it’s probably time to have a think about what it is that gave the original Evil Genius such staying power in my mind.

There aren’t a lot of games which let you play as the bad guy. Even when they do there’s often some caveat about how you’re technically the lesser evil and that what differentiates you from the game’s antagonists is how honest you are about your evil tendencies. Evil Genius doesn’t care to justify your actions, the game knows that after having saved the world a million times, it would be nice to conquer it just the once.

The game is something of a parody of the James Bond movies, having the player construct a labyrinthine base with over-complicated deathtraps and expendable minions stationed around every corner. Everything you do is in the name of advancing the cause of ‘evil,’ and your fiendish plots will range from causing minor annoyance to intelligence agencies, to the destruction and theft of historically significant artifacts. At its most extreme, your plots appear to be terrorism dressed up with sarcastic language. So it’s good that much of the game’s dry wit is excellently written, and the weight of your evil is offset somewhat by its cartoonish art which (mostly) holds up even 17 years later.

The moment to moment gameplay consists of a fairly in depth management system – minions have multiple stats that need satisfying regularly, and much in the same vein as Dungeon Keeper, different rooms and items must be constructed to keep them happy and evil. Naturally, all of this costs money which must be appropriated from the world at large and shipped back to your island fortress in the form of very visually pleasing bars of gold.

Unfortunately, earning money is easily one of the game’s most frustrating aspects. The game only checks for thievery every 60 seconds, so earning money can be a slow process, especially when stealing from richer regions prompts small armies of enemy agents to descend on your base. More egregiously, the game has no fast forward button. So whilst there are other ways to make money (many dedicated fans recommend trapping enemy agents in a loop of never-ending, non-lethal traps – combos of which reward you money), it’s very easy to end up in a death spiral, where you’re losing time to making money and then having to use that money to recover from the inevitable counter-attack.

Speaking of which, dastardly traps are only your first line of defence against the forces of justice – after all, what’s the sense paying a small army of nameless goons if they don’t regularly die for you? These goons will fare well enough against investigators and burglars, but dealing with the top tier agents will require an extensive training program, enabling the use of better weaponry, more cunning deception, and fantastical research equipment. Should all that fail (it probably will, they are faceless goons after all), there’s the henchmen – special minions that will make quick work of your enemies. The combat is very hands off, you’re essentially limited to setting the ‘alert level’ of your base, which determines whether or not your minions are armed. Unfortunately, the alert siren is very annoying and there’s no way to mute it besides muting the entire game, which I refuse to do because the sound design is excellent and does a lot to tie the experience together.

Mostly, in replaying the game for this article I was blown away by just how well the game holds up and can only hope that Evil Genius 2 clean up the problems the original had, while maintaining everything that gave it such personality.