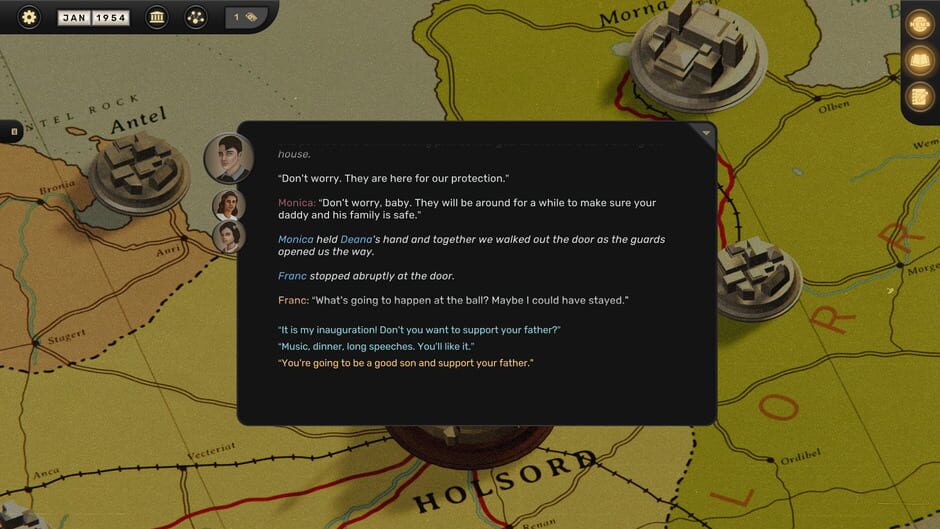 What is it like to be the president of a fictional country? Dan Jenkins finds out with Sordland in Suzerain, a text-based indie title

Of all the things I was expecting to see this week, a pop-up dialogue informing me that I’m about to change the constitution of a nation wasn’t one of them. Fortunately, no one has left me in charge of a nation state while they visit their parents, but I apparently have been elected president of the fictional Republic of Sordland, and I was so immersed in it, that once in a conversation I accidentally substituted America for this game’s fictional equivalent.

My inability to differentiate between reality and fiction aside, the Nation of Sordland is more or less based on Turkey, and the developers aren’t shy about this – the Kurdish people become the ‘Bludish’, the Kemalists become the Sollists, and Nâzım Hikmet Ran becomes Bernard Circas. It’s not a one-to-one comparison though, the dates, roles of people and nature of events are changed – this seems to be deliberately making a point about the flexible nature of facts in a ‘post-truth’ world, as opposed to an attempt to avoid getting into a fight with a foreign government, as Ubisoft did when it represented Bolivia as being overrun by violent drug cartels.

As positive an effect this is on my overall feelings about the game, in the moment-to-moment gameplay, I often found myself a little confused as to how much time was passing. Sometimes the game very clearly states that a few days or only an evening has passed, and sometimes it shoots you forward months or years without warning. This is not as great a problem as it is in other games, because Suzerain is largely a text-based choose your own adventure game. There is very little in the way of micromanagement, your most commonly occurring choice being whether you want to spend your budget or keep it to spend later. The nature of receiving all these choices as a part of conversations with other characters, or the occasional dialogue box in which you adjust several values at once means that you often find yourself making decisions without having first received all the information. To offset this, the game gives you a notes tab and access to a codex that contains important information delivered in a diegetic register. However, it fails to indicate which information is important, and which is just flavour text. It perhaps speaks to the quality of the writing that such information is indistinguishable, but from a gameplay perspective it can cause confusion, shattering your immersion. The ability to call up any of the characters and inform them there is been a change of plan would be a potential fix, but that would be a lot of extra work and would seriously disrupt the games forward momentum, which excellently captures a feeling of constantly hurtling toward disaster, even when things are mostly going okay.

Suzerain really surprised me in a lot of ways. I felt like I learnt much about my own politics and beliefs in a way that I wasn’t necessarily expecting. Immediately after being warned about the possibility of a potential pandemic by one of my advisors, I immediately dumped all the resources at my disposal into improving healthcare in the impoverished regions along the border and enforced mandatory vaccinations, against the wishes of the more conservative elements of the nation. I felt taken advantage of initially, as though the game had somehow tricked me into making a rash decision based on the climate of the present day, but later felt vindicated in that decision, if still a little indignant. This incident speaks to a problem the game has generally – it expects you to make somewhat sensible decisions and sometimes suffers from presentism.

Whilst I confidently feel that role-playing and getting into the mindset of the player character is the best way to play to this game, the fact that there’s limited opportunity to behave erratically works to the games detriment. The game will try to carry on without you if your decisions start to resemble those made by an offbeat metronome and sometimes struggles with what exactly to do with your character. The best example of this is in your relationship with your wife. She remains largely the same character, regardless of how your character acts. This is fine if you’re playing as a progressive champion of women’s rights or even a begrudging half-supporter. If you decide to play as a misogynist the game treats it as though the player character had woken up one morning and decided to become the typical sitcom husband, surprising your wife by suddenly speaking of women only in terms of cooking and sex, or that she’d been ok with your insane sexist ramblings thus far into the marriage, but suddenly remembered that she was a feminist the second you became president. It stands out even more because the game is very much concerned with systemic misogyny.

A great deal of the game is devoted to discussions regarding the place of education in creating a more equal society, and many of the women in the game discuss their difficulties in having their views and careers legitimised in male-dominated institutions such as politics, but such inconsistencies as the aforementioned relationship with your wife does a lot to take you out of the experience, which is death to a game that requires some immersion to enjoy.

The simple visuals go a long way to aiding that immersion, there’s not a lot to see but what’s there (coupled with the very detailed codex entries) gives the feeling that Sordland is a real place with a real history. Music is used intelligently, with gentler tracks that occupy the soundscape giving way to more intense pieces as the tone requires; what’s there is very good, but there’s so little of it that I heard the same tracks multiple times before the end of the game, which began to grate a little.

Suzerain is an emotionally exhausting game that captured my attention in a way I
don’t think any other game has this year. The relative lack of player agency is somewhat concerning, especially with competition like the Crusader Kings series where system focused gameplay creates emergent storytelling – providing limitless replay value. In a lot of ways, playing Suzerain is like watching someone else play Crusader Kings, while occasionally providing a direction for them to follow. For those who want to experience all the white-knuckle tedium of politics, but are turned off by the spreadsheet nightmare that games like this normally are I can heartily recommend Suzerain. If you enjoy the spreadsheets and manage an EVE clan as a full-time job, then Suzerains excellent writing should be enough to carry you through for at least one playthrough, after that though, your mileage may vary.

Check out more from our Gaming writers here: