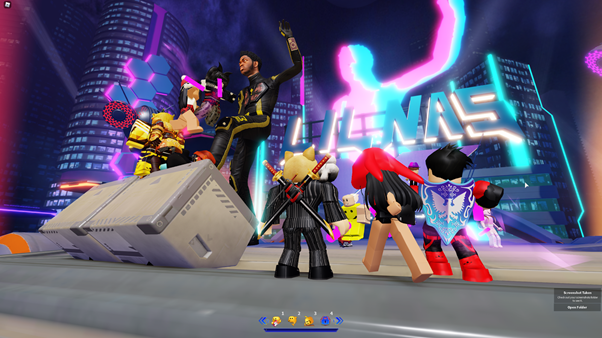 Dan Jenkins gives his verdict on the recent concert he attended, in Roblox! Meanwhile, Tom Martin discusses the future of virtual concerts

Dan Jenkins and Tom Martin
Published at 12:30 on 3 December 2020
Images by Roblox Corporation

Roblox has emerged as a new competitor to Fortnite in the world of virtual concerts as it asked its userbase to take a trip down the old town road. Redbrick had one of their own in attendance in the form of Dan Jenkins, with Tom Martin hitching a ride to talk about the increasingly popularity of events like these, and how they might continue in the future. Being the kind of reporter that’s willing to rush around like the characters in His Girl Friday (provided I don’t actually have to leave my house to do so) I naturally dashed to the scene of what may be the most culturally significant event in human history. After struggling to remember my password for an account I created when I was thirteen years old, I was able join a kind of old-western themed waiting room. To my dismay, I discovered that the horses were not in the back, and thus the horse tack was not attached, the hats were not matte black (they were pink) and the boots, while matching, were also a shade of pink. I don’t need Redbrick Life&Style to tell me that this is a fashion no no.

The waiting room also featured a fairly light scavenger hunt where players were instructed to find tokens hidden around the old town at the end of the road, with an exclusive Lil Nas X emote promised at the end in addition to fun facts about the man himself with each token collected…

Some fun facts about Lil Nas X include:

With hindsight, I’m starting to think some of these fun facts are more fun than they are factual. Unfortunately, I crashed during the loading screen transition from waiting area to main event, and judging by the complaints in the in-game chat I wasn’t the only one, this may speak to technical issues on Roblox’s end which could potentially kill any dreams of competing with Fortnite to become the next big virtual event space. Luckily, a friend of mine was able to load in for a few tracks (one of which was technically the first live performance of ‘Holiday’) before also crashing during a loading screen. They captured these terrifying images:

Technically Lil Nas X was not performing live over VOIP, but did seem to have recorded some bespoke lines for the event, directly referencing Roblox, which is nice, isn’t it? In addition, the terrifying character model used to represent Nas seemed to be synced to some kind of motion capture – not that this will do anything to reduce the amount of time it will spend stalking the corridors of my nightmares.

Naturally the obvious evolution of this trend is to have Pitbull perform a concert in Hitman – 47 even looks a bit like Mr. Worldwide, just have him say “Dale” a bunch and I’ll be happy. Tom Martin – The Future of the Virtual Concert

There couldn’t be a much better opportunity to assess the viability of concerts in video games than right now, when everyone is unable to attend physical performances. Between the concerts involving Marshmello and Travis Scott, when discussing virtual concerts, today we would typically cite Fortnite as a pioneer of the form. However, Epic’s Battle Royale behemoth wasn’t the first game to host an in game concert.

In fact the first time I recall seeing the notion of a concert within a game banded about was in July of 2013, when a Canadian record label, Monstercat, held a concert in Minecraft in aid of charity. The concert functioned much like the virtual concerts we see today, with players able to book their place on a specific server. Once in said server they had access to a room designed to look like the inside of a concert venue, with the performing artist just out of reach at the front, “performing”. In attendance were Minecraft celebrities of the day such as SkyDoesMinecraft, BajanCanadian and Ssundee. (The sheer force of nostalgia I got from just typing those names would be enough to power my own digital concert.)

It’s difficult to measure the success of the event, as far as I’m aware the record label hasn’t repeated the event since. And its notion of money, of course, that will principally determine the future of events like these. All of the concerts mentioned above were free to attend (provided you owned the game), this means that it is likely revenue on the artist’s side came from the developers themselves. The developers in this case will be reliant on player attendance being so massive that it offsets what is paid to the artist. This is fine if you’re a game like Fortnite (which made $1.8Billion in 2019 alone) or Roblox ($435M in the same time period). But I don’t think we’ll see many smaller games being able to attract big names.

It is of course also at the mercy of these artists wanting to be involved as well. These online concerts have so far involved pre recorded sets, so I doubt they scratch the same itch that a live performance would. However, there is perhaps a different element of artistry involved in putting on a concert in a game. Whether a fan of Travis Scott or not, the visual aspect of the concert in Fortnite was genuinely spectacular. It could be possible for games to attract acts by pitching these concerts as a new visual medium! Who wouldn’t love to play Tron in Roblox all set to some Daft Punk? Who wouldn’t want to build a penis out of blocks on the dark side of the moon with Pink Floyd? What says “stan Jungkook sksksksk” more than a headshot in Salty Springs while BTS dance in the background?

I genuinely believe concerts as a virtual medium have an incredible amount of potential, even after we’re all allowed to go back to never being able to afford to attend concerts in real life. I do believe however that it relies on virtual concerts recognising they are happening in a game, instead of trying to replace the experience of physically attending a concert. In what other form could you leave your audience with a scavenger hunt to find fun facts about you? In what other form could you be a hundred feet tall and send everyone into space? In what other form could you press spacebar to jump along with drum and bass with Team Crafted? I only know one thing for certain, and that is that I am clearly in need of some more current references. But I look forward to expanding my horizons as concerts in games continue to go from strength to strength.

Thank you for reading this piece. Check out more from our amazing writers below: