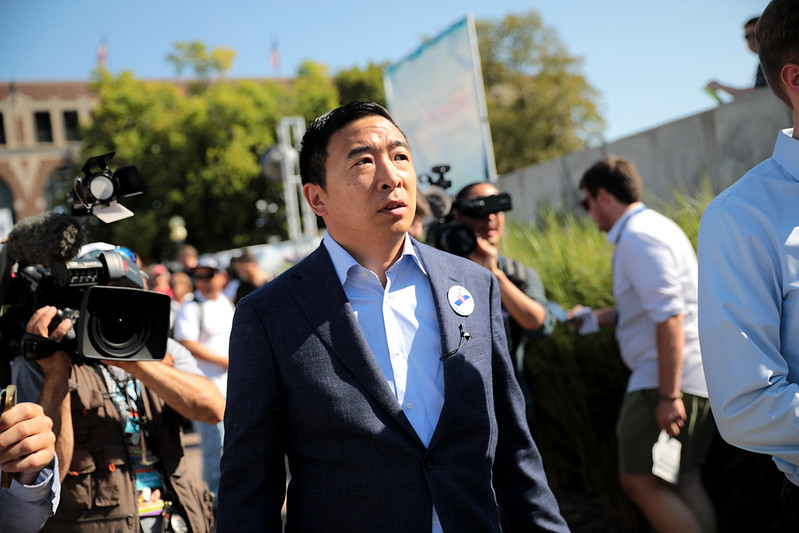 Breaking Up The Duopoly

Comment Writer Kit Parsons praises Andrew Yang and The Forward Party, suggesting that it is refreshing to see attempts to make meaningful changes to the political system in the US

Written by Kit Parsons
Politics
Published at 19:00 on 4 November 2021
Images by Gage Skidmore

The United States of America is broken. The political divide is seemingly intensifying as each and every day passes. The tension is palpable, and with the likelihood of Trump running again in 2024, looking for revenge, and the lack of solutions, it is unlikely that the temperature will decrease anytime soon. But this sense that the US is divided is not anything new. It is something that the establishment media constantly emphasise in a desperate attempt to drive an increase in their drastically diminished ratings (CNN’s viewership has dropped 68%). They complain and complain but do not actually do anything to try and solve the problem. And when someone does something to try and solve this critical issue, they attack him.

Andrew Yang, who ran for President in 2020, and then Mayor of NYC in 2021 has left the Democratic party after being a democrat for over 25 years. He did this to become an independent and start a new political party, called the Forward Party, which intends to address some of the issues that the US is facing, and that are emboldened due to their dysfunctional duopoly. When 83% of Congress people are in safe seats, and their future is determined by a small number of primary voters, it means that the lives of all Americans are determined by the votes of a proportionately miniscule minority. This is not what a true democracy looks like. Something needs to change.

But what actually is the Forward Party? What do they stand for? Yang announced that the six ‘key principles’ of his new party will be; ‘Ranked-choice voting and open primaries’, ‘fact-based governance’, ‘human-centered capitalism’, ‘Effective and modern-day government’, ‘universal basic income’ and ‘grace and tolerance’. I know some of these principles do not initially seem important, like why does ‘ranked-choice voting and open primaries’ or ‘grace and tolerance’ really require a new political party? But when you get past the potential initial impression, you can see the desperate need for this new force in American politics. As I stated previously, the future of America is decided by a small minority of people. Ranked-choice voting would give people the freedom to vote for who they actually want to vote for, and open primaries would allow more people to determine who represents them. This is crucial for a true and honest democracy. Grace and tolerance are crucial to calm the tense waters of the American political system. They are crucial and could well prevent a civil war. Tension can only rise so high. I have spoken before about the need for a universal basic income, so I am fully supportive of the Forward Party and its other key principles. Giving the American people more choice about who they want to vote for, and the opportunity to vote for a party that will try to address many fundamental issues that the country faces, can only be a good thing.

Despite all the positives, after Yang is trying his best to address some of the issues the US is facing, he gets mocked by the media (I wonder why so few people actually try and bring about meaningful change).  Now, this is a topic for another time, but I do think it is telling how scared the establishment media appear to be about the thought of escaping the chains of the status quo. I also think it is telling how they resort to these tactics to defend it. I also think it highlights the critical need for ‘grace and tolerance’ and the Forward Party. By trying to dismiss the idea of the Forward Party, the establishment media have actually emboldened the need for it.

I look forward to seeing how this bold experiment goes. Starting this party was a brave and bold move, one which I think Yang deserves credit for. He is using his political capital to try and help people. Most politicians nowadays only use it to help themselves. I hope more political figures take the leap and join the party too. Personally, I would like to see Marianne Williamson join as I think that she is a powerful force for good in American politics. She has also spoken about the need for a third party.

To gain a further perspective, I asked Youtuber Tom, from Nerds for Humanity, a channel that focuses on ‘data, facts, politics, and policy discussions based on logic’, that has over 18 thousand subscribers, what he thought about the Forward Party. Tom has interviewed Yang, so I thought his perspective would be interesting. Tom said he would ‘have preferred the focus to be on open primaries as opposed to a new party per se but am glad Andrew is challenging our thinking and putting in the work. We’re lucky to have him!’ It is encouraging to see that despite the media narratives, some Americans can see past it and acknowledge Yang is trying to bring about positive change.

So, to conclude I am glad Yang took the leap of faith. I am glad that someone had the strength of character to try and make a meaningful change to the political system in the US. The problems are apparent, but few other true, meaningful and potentially substantive paths forward have really been offered. Despite what many in the establishment media are saying, this is a fantastic development for the United States and for democracy. I cannot wait to see what Yang and the Forward Party can achieve for the people of the United States of America. Although tension is high, and the Forward Party is new, I think it makes the future of the US that bit brighter.