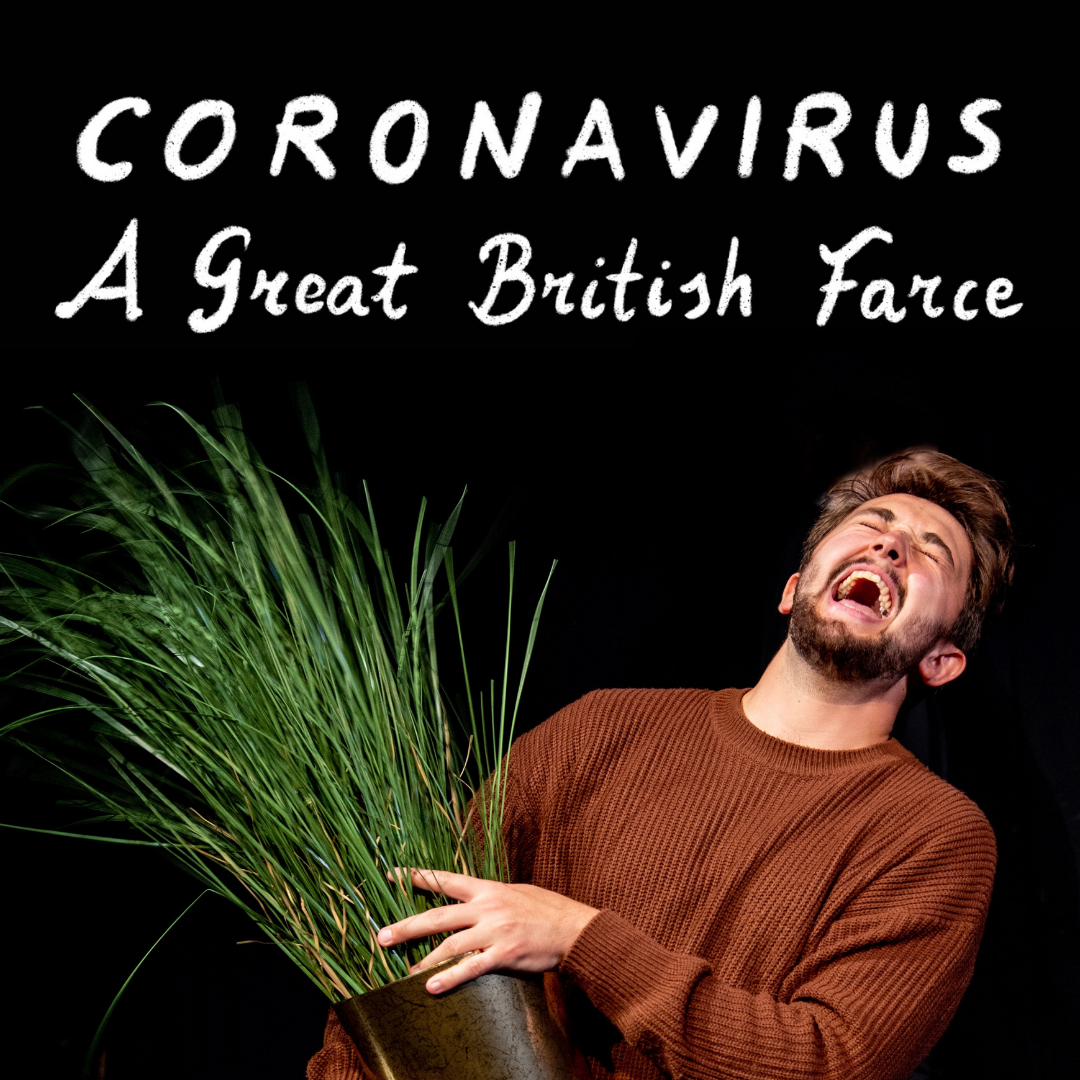 Ahead of his absurd comedy play, Coronavirus: A Great British Farce, coming to Birmingham for one night on November 26th, I spoke with writer Mark Daniels about his weird and wonderful lockdown musings, approaching sensitive topics through comedy, and the impact of Covid on the arts.

First of all, could you explain the premise of ‘Coronavirus: A Great British Farce’ and its main themes?

The main character is in his flat alone like many of us were in lockdown and he’s listening to one of those government press briefings we all watched a lot. He answers back to the person speaking and she responds until he kind of starts up a conversation with the politicians, with the scientists, with all the information sources coming at him. She voices them all and he tries to make sense of them by talking back, which doesn’t get him very far. It starts with a bit of gibberish and descends into chaos by the end. She becomes his plant at one point in the play as he starts talking to anything around him as he goes a bit mad and lonely in his flat. She’s everything from Boris to Chris Witty to his friend on Facebook to his plant and his fridge. So, it’s pretty weird!

Nice, that’s very creative! How did it feel to share your inner weird and wonderful thoughts in lockdown with the public?

The first time we did it was in August in London, not long after theatres had reopened, and I was petrified. The first night of everything you’re always thinking is this going to be any good, as it’s a very personal thing to put out there. This time I was petrified, and I think so was the director, so were the actors. I was like ‘what have I done? Why have I written this thing? It’s very personal, it’s very weird, are people going to get it? Are people ready to watch something about Covid? Do people want to laugh at something so sad? Are they going to think that we’ve hit the right balance of comedy without undermining the trauma and the tragedy?’. It went down incredibly well. I can’t even explain – people were really laughing from the first couple of minutes. The director and I were in the audience, and we looked at each other from across the room like fist-bumping. We were both like ‘wow, if you’re laughing now in the first couple of minutes, these aren’t even the funny bits, just wait for what’s to come.’

We were, however, incredibly nervous, I was even nervous going into the rehearsal room to show the full script to the actors we’d cast. It’s about something that’s affected people in lots of really negative ways, so I hope it deals with the comedy and the pathos nicely and it doesn’t feel like we’re just taking the piss out of ‘oh isn’t it funny that loads of people have died and we’ve all got mental health problems now.’ Thankfully, it’s just gone from strength to strength really. We’re still a bit nervous every night because people laugh in different places, perhaps because it’s a bit weird and there aren’t clear punchlines. As it has some darker bits, sometimes it takes longer for the energy to come up. Sometimes people even laugh right through the dark bits which is equally fascinating and a real challenge for the actors to play with that energy. Different bits resonate with different people, and it only takes one audience member with a really loud laugh to make everyone feel comfortable. It has been nerve-wracking, fascinating, enjoyable, and ever-changing.

Great, it sounds like it will be cathartic to be able to laugh about something so serious. There is, however, a fine line between comedy and trauma – where do you think that line should be drawn? Are there some things you would say you can’t laugh about, or do you think that when approached appropriately you can write comedy about anything with time?

Personally, I wouldn’t say it’s a good idea in the arts to rule anything out, though I’m not saying I would go and write a play about absolutely anything. It just happened with this piece. As long as you’re punching up or punching sideways or punching at yourself, and you’re not punching down, I think art can surprise you and allow an audience to find catharsis from traumatic experiences. I stand up at the end of the show and give a two-minute speech explaining that this is a comedy but there are serious issues of loneliness and mental health, just in case anyone’s thought ‘this is just a ridiculous comedy’ and that’s all they’ve taken from it. We’ve partnered with some charities to push their message and have talked with local charities in every city that we’ve gone to. As a creative team, this has made us feel more comfortable, knowing that if someone is watching this play and feels they’re just reliving some horrendous trauma and not finding it at all helpful, we have got a message for them.

I agree, it’s all about how you frame it and ensuring things are done right. Do you have any more advice on how you approach sensitive ideas in comedy?

On this play, we’ve partnered with charities and just asked them really. We basically told them ‘We’ve made this play, we’re going to do it, is there anything you think is important for the way that we deal with themes and is there any way we can use this play to help you?’ I think it’s nice to include moments of sadness or darkness and not pretend that stuff isn’t there. If you tell somebody, ‘Come and watch a play about coronavirus, lockdown and loneliness it’s going to be a really depressing monologue,’ who is going to watch that?

If you say to people ‘we’ve got this weird surreal comedy about loneliness during lockdown and its funny because the narrator is trying to have a logical conversation with something that’s impossible to reason with, a bit like you might have felt,’ then people come, and they don’t feel lectured on the topic. They might think ‘hang on, my friend lives on their own and I haven’t really spoken to them, maybe I should check in with them.’ I think you can only achieve that with a bit of lightness to inform people that aren’t initially interested in these topics. The charities said that it’s fine to do comedy about these things, but ‘if you can say a message at the end, it might increase the average person’s empathy with those suffering.’ Comedy invites people into a topic in a way heavy drama cannot always achieve.

That’s great. I think the arts can do a lot to benefit peoples’ wellbeing but alone they are not always enough, so the fact that you’ve got practical help available too is amazing. Moving on to something lighter, of all the strange and unforeseeable circumstances that we all experienced in lockdown, what would you say you found to be the weirdest?

There was a moment where I was wet-wiping a lot of my groceries and, I’d been trying not to use wet-wipes to be environmentally friendly, but I bought all these wet-wipes and was cleaning down tangerines and tins of beans and then looking at my hands like ‘hang on if that’s touched the wet-wipe packet…’, trying to logic through how germs spread and realising how little knowledge I had. I also did talk to my fridge a little bit as it is incredibly noisy. I mean, we didn’t strike up a friendship or anything, but I certainly yelled at it a few times. A lot of people have said they also started talking to inanimate objects in their flat like plants or teddy bears. The other thing I found in my lockdown diaries that influenced the first draft of the show, was pages about when it snowed. I’m not usually that bothered about snow, but I was so fascinated upon having a bit of time to look at it and to spot some of the beauty in the world. It made me laugh because it got really poetic out of nowhere, going from ‘you know, I’m really sick of this and I want to go out,’ to contemplations on gods gift of this heavenly snow.

Daniels closed with some advice for anybody interested in writing a comedy piece. He stated it’s best to forget about the bigger picture of writing a long, on budget play for a certain audience, and just write the first page. One page is one page more than most people achieve. He recommends gaining inspiration from people watching in everyday life, paying attention, for example, to strangers on a bus.