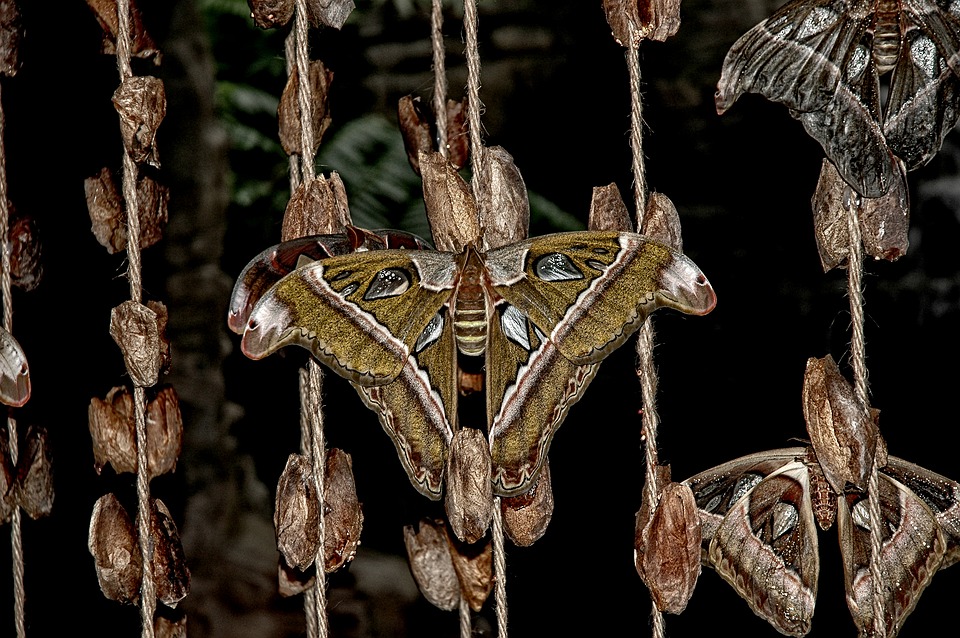 Attacus atlas, belonging to the Saturniidae family, is a species of moth that could be mistaken for a snake if you did not know better. The majority of the species live in Southeast Asia’s tropical rainforests. They tend to remain here for the best part of their lives, as the trees there provide the perfect habitat to allow them to breed and sleep.

Where the Atlas moth’s name originates from is uncertain – some suggest that ‘atlas’ refers to its resemblance to a paper map, whilst others presume it refers to the Greek God Atlas, who was believed to hold the weight of the sky on his broad shoulders – this is fitting for the moth with the largest wing surface area in the world.

The moth is able to warn predators with the help of its distinct wing shape and markings,  and clever movement of its wings to mimic that of a serpent. Typically, their wings are an orange-brown colour accompanied with black and white markings, and their wingspan can reach up to 12 inches. Interestingly, adult atlas moths only live for two weeks at most – their life’s purpose is to mate and produce more moths. This mating happens at night as its pheromones are not as easy to detect during the day.

The caterpillar stage of an atlas’ life is very important; the moths do not have mouths and cannot eat, which means that they rely on their time as caterpillars to gain as much energy as possible to help them survive long enough to mate; they spend most of this period of time consuming food such as cinnamon and citrus fruit. The fat storage only lasts for a couple of weeks to sustain life.

Fascinatingly, atlas moths can produce their own silk called fagara which they use to create their cocoon. This brown silk is very sturdy which provides excellent protection with Asians using their silk to make purses due to this valuable quality.

Want to read more Creature Features? Check out these!