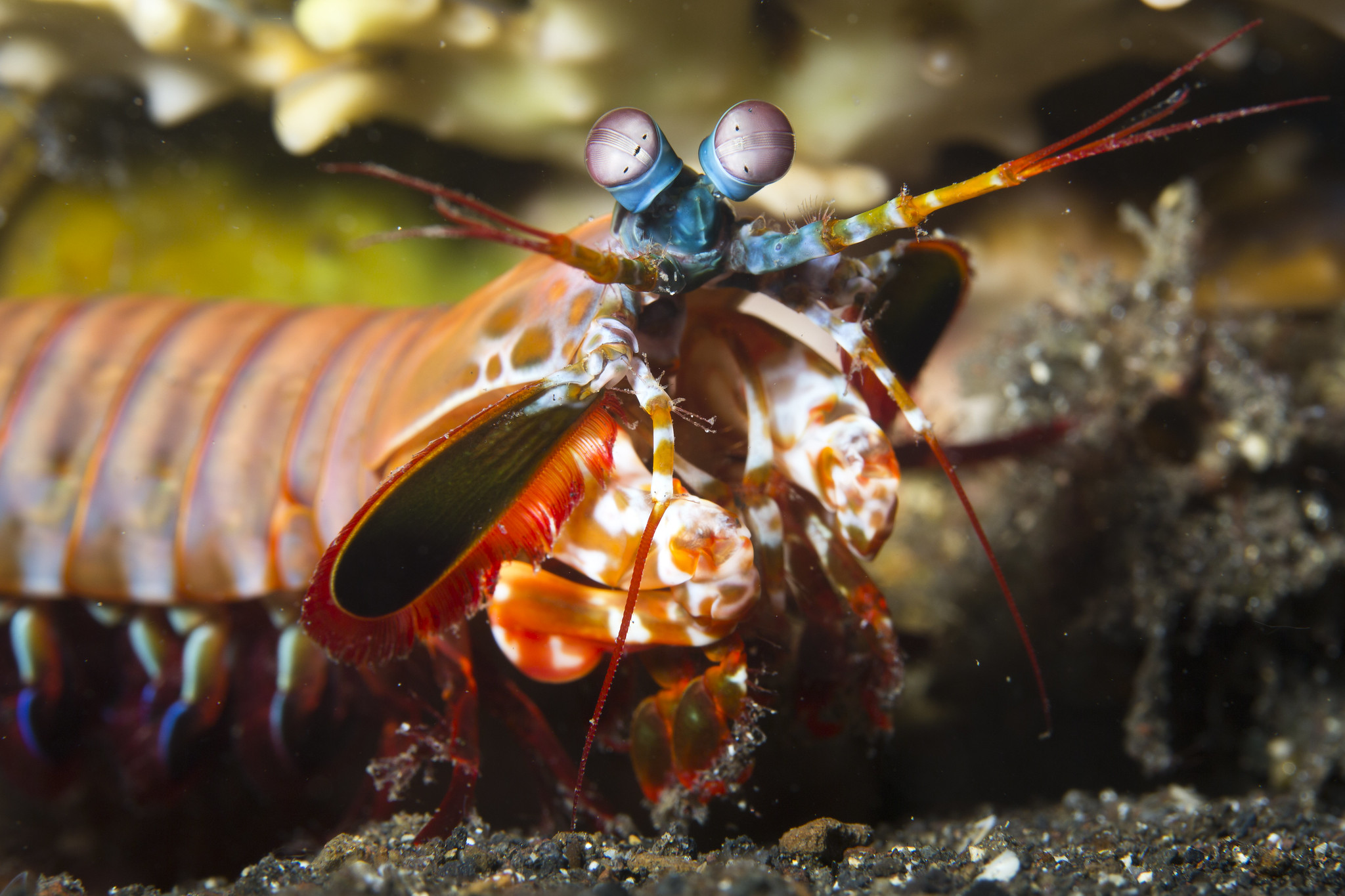 Mantis shrimps are a group of colourful, dangerous, and surprisingly intelligent crustacean species found mostly in the ocean’s tropical coasts. Their strange bodies and behaviours are a marvel.

Mantis shrimps can range in colour from cloudy whites, to dark stripes, to shimmering gradients of greens, blues and pinks. Even the most colourful of these shrimps spend most of their lives burrowing in intricate networks beneath the seabed, obscured from view. Emerging only to feed and relocate, they are unusual among crustaceans for hunting and killing prey.

The mantis shrimp hunts with truly remarkable ability. Some species will impale fish with spear-like arms while others smash crabs, snails, and oysters to pieces with large club appendages. Different species are often divided into ‘spearers’ and ‘smashers’ accordingly. The hammer-arms of smashers accelerate at 102,000 m/s2, reaching speeds of 51 miles per hour. The incredible speed of their strikes cause shockwaves in the water which can stun or kill a creature even if the strike misses.

Exhibiting complex behaviour, some mantis shrimps use the fluorescent patterns on their bodies to communicate with other shrimps, and maybe even with other species. They engage in ritualised fighting and use their ability to learn and remember well to recognise their neighbours – both by their markings and by their individual smell. Some species form long-term monogamous relationships, remaining with the same partner for up to 20 years and sharing the duties of hunting and caring for their eggs. Thought to have the most complex eyes in the animal kingdom, their 12 to 16 types of photoreceptor cells dwarf the three types in the human eye, allowing them to see light from the deep ultraviolet spectrum through to far-red.

Mantis shrimps form part of Cantonese, Japanese, Vietnamese, and Mediterranean cuisines, among others. The colourful peacock mantis shrimp is also desired in the aquarium trade, though it is known to be difficult to keep in captivity and is considered by some to be a pest. When rocks from the ocean floor are brought into aquariums, a burrowing mantis shrimp can often be accidentally carried inside. Once it emerges, the mantis shrimp will veraciously hunt other inhabitants of the aquarium and prove very difficult to catch. They are even known to break the glass of tanks with their hammer-like blows if confined to too small an area. In the wild, the mantis shrimp has very few predators on account of the shocking power of its arms. Admire their gorgeous colours from a distance – there’s a reason they’re sometimes called ‘thumb splitters’.

Enjoyed this article? Check out…

Are Beavers Back in the English Wild?