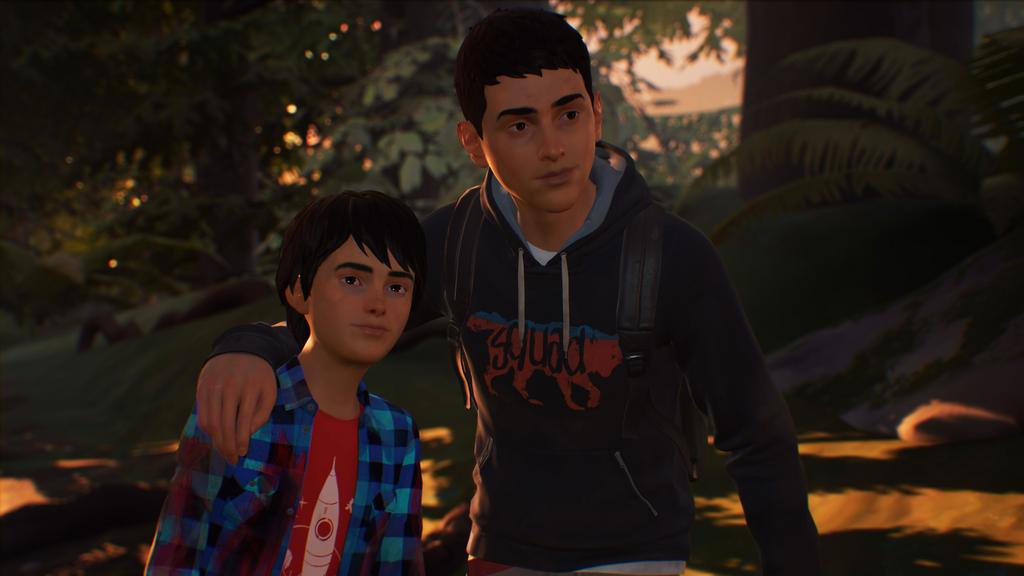 Written by Alex Green
A chemistry student, film fanatic and gamer. I tick all the geek boxes. Also loves a good waffle, whether it's the food or rambling about whatever.
Published at 11:00 on 9 January 2020
Images by Square Enix

On the 2nd August 2018, a teaser trailer of dash-cam footage heralded the newest instalment in the Life Is Strange franchise, a series that has been a key part of the gaming landscape over the last decade. Few could have predicted the scale of the second main instalment from that trailer. What started as a couple of young boys on the run from the cops became a story and game much greater than that in size terms. This is a game that has wholly embraced tackling the social issues and personal feelings of our time through the medium of gaming, something pointed out by Raoul Barbet at The Golden Joysticks this year, stating: “As creators, we think this is now one of the best ways to talk about difficult subjects, social issues (and) political topics”.

With Life Is Strange 2, Dontnod kept to the word on that. This willingness to craft episodes based around the key political and social issues of modern America combines with the smaller story of two boys on the run to create a story full of complexity and depth. In this aspect, Life Is Strange 2 totally excels. Whilst occasionally some of the writing can come across as ham-fisted with some of the side characters, there is an overall quality to the thematic exploration here. The game doesn’t shy away from tackling the harsh realities of the anger that has enveloped America. Confronting this is at the core of many of Life Is Strange 2’s dramatic beats and helps provide the strong story that fuels the game forward.

Within that also lies characters who have a key emotional heartbeat. The Diaz brothers, Sean and Daniel, are so well constructed with equally frustrating and sympathetic character traits that makes them so fully formed by the end of the story. Each explores maturity symbiotically as the episodes progress but the difference in age is exploited nicely to give each their own spin on the topic. Sean explores love and responsibility with an excellent vocal performance from Gonzalo Martin, whilst Daniel must learn to grow up and handle power. Insert quote from Uncle Ben here. Whilst there are plenty of other endearing and interesting side characters, they meet on their journey ranging from online bloggers to drug lords to law enforcement, their dynamic is imperative to this game. Thankfully, it is natural and well realised in both the voice acting and the writing. These complimentary character arcs are the backbone and the other best part of Life Is Strange 2. Those elements are key to constructing any narrative-based game. Succeeding at both is crucial to draw players in and this is how Life Is Strange 2 succeeds on delivering an interesting narrative. The decision-making feeds excellently into the format of Life Is Strange 2, with your decisions affecting both you as Sean and also Daniel and how he will grow to view the world. A simple but effective gameplay hook. Whilst the game doesn’t entirely succeed on the gameplay front (which will be mentioned later), this overarching point is great at making the smaller moments and choices more important and adding to the engagement within the story.

On top of this, there is the infamous art style, a rather unconventional and sometimes dicey part of the series. There are still some hallmark graphical glitches that can disturb any episode, the odd lighting bug that can disrupt the immersion. In spite of this, when it’s working, Dontnod is able to craft some beautiful areas. From the lush Washington forests to the deserts of Arizona, Life is Strange 2 creates some expansive and gorgeous outdoor areas. The variation in area across the episodes does give the opportunity to have fun with these vistas, which Dontnod do with a flourish. However, its interiors with which the series does better, able to create detailed environments full of stuff to explore and observe. These areas are some of the most interesting highlights from a gameplay perspective with the signature walking simulator aspects of examining rooms certainly intriguing. Some of this can actually play into key decisions later made, in particular in episodes 3 and 4, so credit should be given to Dontnod for making this exploration somewhat rewarding narratively. However, this also exposes the true weakness that dogs all of Life Is Strange 2.

Simply put, from an upfront gameplay perspective, this is the weakest entry in the series. Whilst people might think that gameplay doesn’t matter in a series like this, that feels counter-intuitive given how the first game in the series and the spin-off The Awesome Adventures of Captain Spirit were able to craft odd puzzles and sequences that created some memorable gameplay ideas. For wonderful examples, consider the Water Eater and Manteroid sequences in the spin-off or stealing Frank’s keys in Life Is Strange. Whilst playing as a powerless character makes for a more intriguing game from its exterior, it makes playing a somewhat passive and mundane experience over the course of the 10-20 hour run time. Segments involving Daniel’s telekinetic powers feel too few and far between which hurts the sense of adventure as the boys try to run from the law. This lack of intensity caused by the wavering scene-to-scene gameplay gives Life Is Strange 2 an uneven quality. The praise for the decision-based aspects are undercut by the fact that the gameplay just lacks engaging moments at many points, with far too many pointless minigames and QTE-based puzzles not keeping up the gameplay in between those decisions.

This is an underlying fault dragging it down compared to its predecessors. However, whilst it certainly isn’t the best Life Is Strange game, credit should be given for another strong entry in this true oddity of a franchise. Given our current obsession with sequels, it’s almost certain Dontnod will continue to pursue new stories in this world well into the next decade. That shouldn’t disrupt their other new projects, including the exciting Tell Me Why. The only hope we ask is for Dontnod to keep innovating and taking new approaches as they did here, whether it fails or passes with flying colours. Also more blog posts from Brody please.

Check out more reviews from 2019 here: