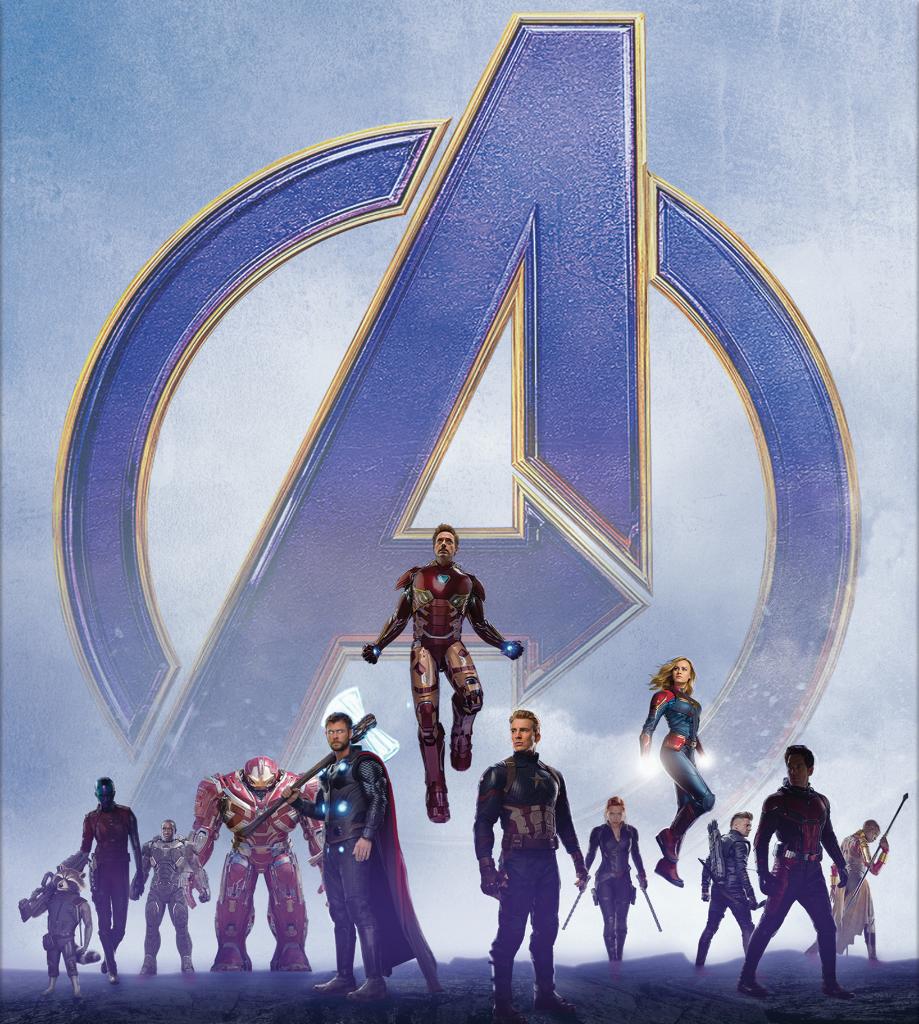 The culmination of 21 interconnected movies and the biggest film of all time – but just how good is Avengers: Endgame? Redbrick Film Critics take a look at Marvel Studios’ unprecedented epic as we celebrate its Blu-Ray release

A click of the fingers was all it took for things to go bananas in the Marvel Cinematic Universe. With half the planet and half of the principal cast turned to dust, the few who survived the events of Infinity War are left to grapple with a new world. Black Widow and Captain America are trying to maintain some kind of morale on Earth; Iron Man and Nebula, stranded in space, have lost hope. New heroes are less willing to let these characters wallow in their own grief.
If this sounds like a lot – it is! It is also only the first hour! Endgame is a busy film, but its length means that it has time to breathe for these human moments. Infinity War’s expansive cast meant that narrative was broadly lost in the shuffle; the renewed focus on the original six Avengers offers the chance for endings which they would be robbed of if the cast was at full strength. The Snap clearly has its perks.
Iron Man and Captain America’s stories are extremely affecting, but the others are a more mixed bag. Thor’s material disappointingly transforms his trauma into comic relief instead of something more complex. Hawkeye and Black Widow are as entwined as ever, but one of their key moments lacks the emotional weight it searches for. A few throwaway lines over the last 10 years does not make for a rich relationship. At least Black Widow gets material of her own here; she’s been left to mediate the men’s conflicts for too long. Even she fares better than the Hulk. The decisions regarding his character development make sense but happen almost entirely off-screen, a shame given that this particular conflict between his two personalities was one of the most curious of Infinity War.
As for the new recruits, Paul Rudd is as charming as you would expect and is even given the chance to deliver one of the film’s emotional hammer blows very early on. Brie Larson’s performance is impressively synched with her work in Captain Marvel, given that she filmed Endgame before her character had been fully sketched out in her solo film. The climactic battle offers just enough character moments from these kinds of supporting characters to anchor the hurricane of action; one female-centric moment is bound to induce goosebumps in a vacuum, but it alone does not make up for Marvel broadly side-lining its female characters for twenty films and counting. But they get that moment – perhaps it is a start.
The scale of that final battle is something to behold and will sate devoted fans. Almost everyone gets their moment and the action just about remains coherent. Yet, it is what comes after that is truly a delight: an understated, poetic final 15 minutes which narrows its focus even further and provides genuine closure. Endgame is a more potent title than you expect – and that is the most pleasant surprise Marvel has produced in years.

The Marvel Cinematic Universe has taken film-goers through some tremendous ups, some mediocrity and even a few dour duds over an 11-year period, so Endgame really has one job: follow up Infinity War by wrapping up 21 films of history. Avengers: Endgame almost inexplicably manages to pull it off with a satisfying experience. It’s not without a few serious flaws, but fans of the franchise who have been so emotionally invested in these characters are rewarded.

The fourth Avengers instalment has plenty to do following the shocking mass-dusting at the end of Avengers: Infinity War. Yet it does it mostly with complete cinematic pomp. The first and third acts are striking contrasts that work so beautifully together to create a naturally flowing story for the heroes: a subdued and grim first act sets the stakes excellently and the third is bombastic, completely shameless and indulgent in its blockbuster battle, but never insulting to the viewer. This adds to some excellent performances from the ensemble cast, most notable being Robert Downey Jr. as the ever-enigmatic Tony Stark, somehow adding a new layer to an already nuanced character. Praise should also be given to the great work from Chris Evans, Scarlett Johannson and Paul Rudd especially.

The direction from the Russo brothers is excellent, especially in any action scenes which are so entrancing, combined with a beautifully stylised look from some great cinematography. Additionally, one of the biggest surprises is how strong Alan Silvestri’s score is. The Marvel films have historically struggled to create memorable scores, often losing the emotional depth that a better score could add to in key moments. Here, the score shines through the action and powers with a flourish.

That said, Avengers: Endgame is marred by some narrative issues. The screenplay is decent, but the second act is very messy, as it struggles to balance an already complex plot taking place over multiple locations. Some exposition scenes don’t help the plot, but rather confuse it for the viewer and make it feel messy. There is occasionally an over-reliance on previous films and providing fan-service, which, whilst perfectly fine in short bursts, sometimes threatens to overtake the key emotional moments. Add to this Thor’s incredibly sloppy and slightly offensive plotline which completely undercuts any serious character arcs for a long, and stupidly unfunny joke, and Avengers: Endgame does have its weaknesses that result in a second act that feels imbalanced. Thanos would be livid.

Despite this, Avengers: Endgame is unlike anything else we’ve seen in blockbuster cinema. A film that embraces 11-year long character arcs, pays them off and leaves us wanting more. There’s very little like this at the movies, particularly with the ever-growing failures of the DCEU and the Dark Universe. It’s truly marvellous.

We didn’t think they could do it. Tying together 11 years, 11 separate franchises and 21 films’ worth of universe seemed impossible, and Anthony and Joe Russo had no right to make it work. Yet here we are. Avengers: Endgame is everything we could want from both a superhero film and a conclusion to Marvel’s Infinity Saga, and so much more besides.

Endgame is a film packed to the brim with surprises. Not a single aspect of its significant runtime (3 hours and a minute, so go easy on the drinks) goes in a direction we expect it to. Marvel’s cagey marketing has paid off beautifully, meaning every new scene, plot beat, or character arc comes as a surprise. Definitely stay away from the spoilers; Endgame is one that is better the less you know about it.

It’s still staggering how impressive this thing is, particularly in its finale. The action set-piece is huge and sprawling, easily the biggest we’ve ever seen in these films, but we never once get lost in its carnage. The entire sequence is shot and blocked to perfection, the Russos always making sure we are completely aware of everyone’s whereabouts and what they’re doing. It’s full of tiny moments of beauty, making sure we’re always on the edge of our seats in anticipation. Alan Silvestri’s score shines here; he one-ups ‘Forge’ from Infinity War’s soundtrack with ‘Portals’, a track that perfectly captures the scene’s mood and inspires chills even from listening to it via YouTube. The set-piece as a whole is more massive than anything we have seen, perhaps ever, but is so grounded in character work that it shines as the MCU’s best finale.

This character work applies to Endgame as a whole; everyone puts a perfect shift in, particularly our six OG-Avengers. It feels like a spoiler to say which performers are of particular note, but every single one of them shines brighter than they ever have before. Everyone gets a great arc, with an even better conclusion. It’s at once a perfect send-off for these characters we’ve grown up with, and a fitting reminder of why we fell in love with this series in the first place.

There is, however, one thing that holds Endgame back from true perfection. Despite its sprawling narrative, the film carries a simple and clearly sign-posted three-act structure; acts one and three could not be more perfect, but the second act … wobbles. This is an extremely minor quibble, and is even less noticeable upon repeat viewings, but we can’t help wondering if this middle section could have been a something more. Having said that, if a tiny wobble in a three-hour epic is the price we have to pay for that finale, I’ll pay it every day of the week.

Marvel Studios had no right to make Endgame work. None at all, especially not after Infinity War. Coming out of it, you’ll be amazed that we wondered if they could. Of course they could, and they did; you could almost say it was inevitable.

Avengers: Endgame is out now on DVD, Blu-ray, 3D and 4K UHD.