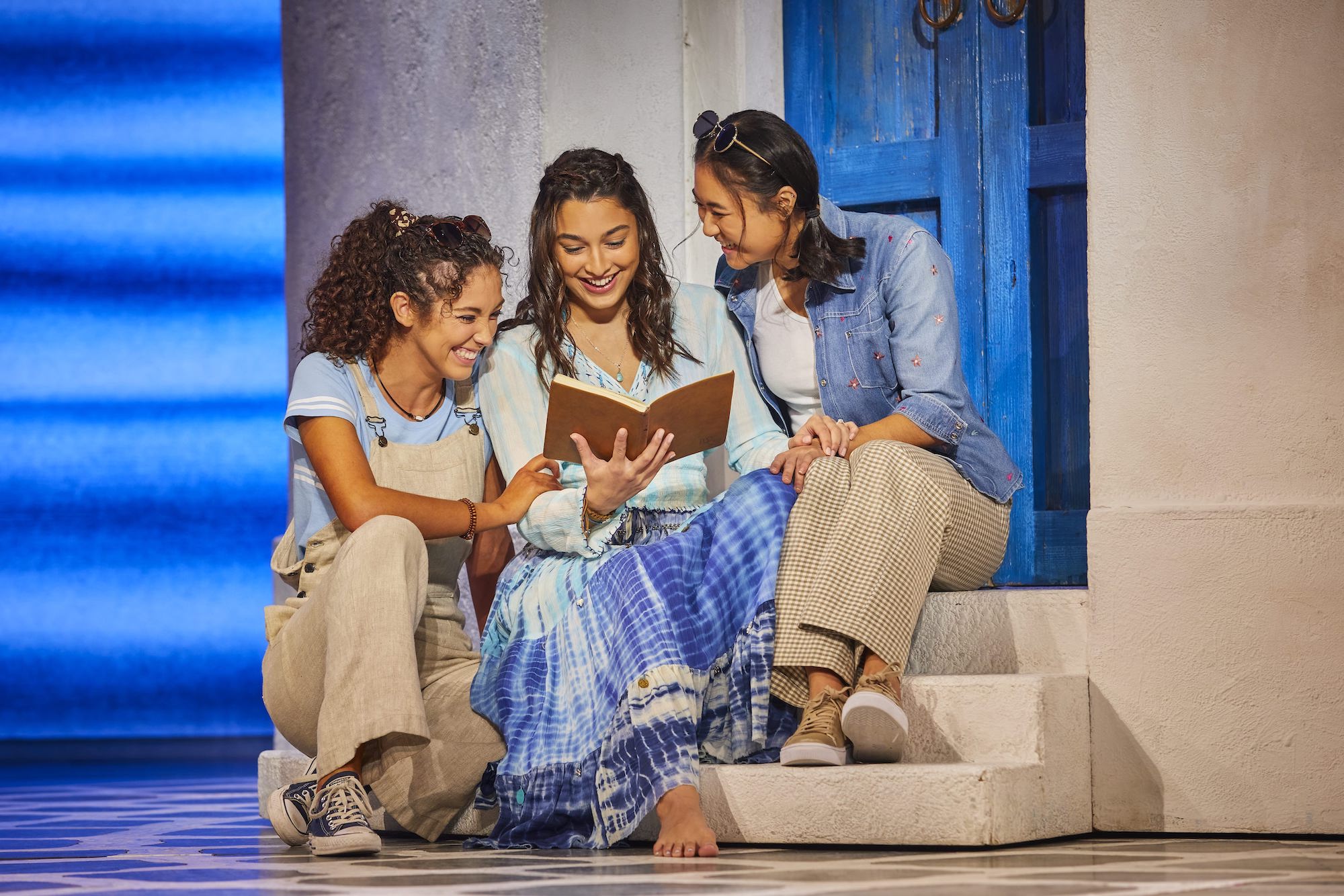 Deputy Editor Jasmine Sandhar and culture writer Jess Rushton review MAMMA MIA! the musical, praising everything from the acting to the vocals

Jasmine Sandhar and Jess Rushton
Published at 14:00 on 6 May 2022
Images by Brinkhoff Moegenburg – Press Image

Knowing my undying love for ABBA and knowing how successful the 20-year tour of the show has been, it was no surprise that MAMMA MIA! the musical was an absolutely extra(-ha!)ordinary night at The Hippodrome yesterday evening. The harmonious marriage of the vibrancy of the characters with the bittersweet nostalgia of the plot has never failed the franchise, whether it be in the form of a book or film. However, undeniably, its true home can only be found in the campy glitz and glamour of the theatre. For it is in this liminal space, where ‘we release the rules of the world and collectively adopt a new set of rules governed by the expectation of the drama’, that people can truly understand the line: ‘Without a song or a dance, what are we?’

Indeed, it was difficult not to become absorbed into the virtual reality of the show when everything was so vibrant and engaging. The set itself was almost the spitting image of Donna Sheridan’s villa-turned-hotel from the film with its blank white walls, turret-edged roof and arching peephole windows. This paired with a hanging shrubbery decoration that was hoisted up and down accordingly throughout and some incredible lighting that acted as the sun casting realistic shadows immediately transported the audience to the fictional Greek island of Kalokairi. It was this alongside other cinematic aspects, such as the high-resolution images of the moon projected onto the backdrop screen and the tendrils of smoke that dreamily drifted across the stage into a pool of fog during ‘I Have A Dream’, that made it all seem so real.

Nevertheless, it was of course the performers who really brought the show to life. From the moment the show began with Sophie’s (Jena Pandya) solo on stage as she posted letters to her three potential dads to the curtain dropping during Donna (Sara Poyzer) and Sam’s (Richard Standing) passionate kiss after the third encore, each member of the cast gave it their absolute all – although, it probably did help that Poyzer and Standing are in fact husband and wife offstage, too! The ensemble of backup dancers and singers was sensational, providing an unmatched energy that constantly propelled the show forward to perfectly recreate a whirlwind summer romance. The countermelodies they provided perfectly emulated those on the ABBA records and in terms of the dancing, justice was certainly served to the award-winning Anthony Van Laast’s choreography, as nobody missed a single beat with uniformly sharp and fully-extended arm movements and meticulous footwork, even when the boys were in snorkelling flippers preparing for Sky’s (Toby Miles) stag-do!

Although the main characters of the show executed their parts flawlessly – with Poyzer belting out notes left right and centre in the extremely emotional ‘The Winner Takes It All’ and Pandya effortlessly gliding up and down her register in ‘Honey, Honey’- for me, it was the slightly smaller parts who really stood out. Take, for example, the hilariously cheeky duet of ‘Does Your Mother Know’ between Tanya (Helen Anker) and Pepper (James Willoughby Moore), which featured various euphemistic dance moves re-enacting sex positions and some brilliant breakdancing segments from Moore in his attempts to woo the former Dynamo. Another highlight would have to be Rosie (Nicky Swift) and Bill’s (Phil Corbitt) joint performance of ‘Take A Chance On Me’, which included the fabulous physical comedy of the pair seat-hopping down the church pews away from each other.

In fact, it was the group numbers that constantly shone, because all of the members of the cast had remarkable chemistry with one another. This was particularly clear through the trios of female characters, which presented a wholesome theme of solidarity and friendship between women – something that grows ever-important in this day and age, as can be seen from the recent reports of a potential overturn in US abortion rulings. The striking parallel between Sophie and her two best friends Lisa (Mariella Mazzilli) and Ali (Jasmine Shen), and Donna and the Dynamos, which was made even more prominent by the echoing of feminist-centred jokes between both trios, was a reminder of how this theme of unity between women withstands the tests of time and is passed on through multiple generations.

Despite these individual groupings, there was always a sense of cohesion amongst the cast due to the phenomenal styling and design of the costumes. Obviously, there were the stereotypical but iconic pieces everybody would expect, such as the Dynamos’ glittery, frilly flares and feather boas, Donna’s classic denim dungarees and Sky’s surfer-boy necklace. However, I really loved the other creative choices that were made throughout, such as the sunset colour palette and hats for the wedding day or the trendy, sparkling Y2K outfits for Sophie’s bachelorette party. In my humble opinion (for I am not a fashion expert by any means!), the winning looks of the night were worn by Tanya, who pulled out a stunning V-neck collared jumpsuit and a beautiful floral beach cover-up skirt to match her bougie personality.

Everything about this show was extremely well-thought-out from the tiny details to the overall bigger picture. Special credit must be given to the music supervisor Martin Koch, who managed to get such an exceptional sound produced that the entire audience was standing up out of their seats singing, dancing and clapping by the end. This continuous ovation was a roaring ‘Thank You For The Music’ that I have never seen at any other show before, and the confetti that burst out over our heads at the very end is an unforgettable moment that left me beaming from ear to ear the entire way home and by the time I got into bed. I can only hope that The Hippodrome will continue to ‘Gimme! Gimme! Gimme!’ more outstanding performances like this one.

Based on the incredible music from ABBA, Mamma Mia! is classic jukebox musical that has received stunning acclaim since its first production opened in 1999. The music and lyrics from Benny and Bjorn have created one of the most well-known musicals, and it is easy to see why the show has been so successful and been adapted into two amazing films. With a beautiful story and captivating music, it is one of my favourite musicals to watch, and I was not disappointed by my third visit.

Jena Pandya as Sophie has one of the most exquisite voices I’ve ever heard, and every note she sang was clear and effortless. Sophie’s character shone through her performance and the emotions of the character felt truly realistic throughout the show. She also proved an integral part of ensemble dances, showing herself to be a true triple-threat performer. The same can be said for her on-stage mother, Sara Poyzer, who brought the character of Donna Sheridan to life in the best way. The vocals throughout the entire show gave me goosebumps, but ‘Slipping Through My Fingers’ in Act two with the pair of them was so emotional to watch as Donna helps Sophie get ready for her wedding.

The talent and stamina throughout the ensemble were outstanding, every dance appearing effortless. The dances were all so in sync and high energy, but their enthusiasm never wavered and their presence on stage was immense. Particularly in the finale of Act one, Sophie’s Hen-do, the entire cast worked together to create the feel of party within the theatre, full of high energy dance and emotional reveals as Sophie tries to find out who her dad is.

Each actor was so in character and made me feel almost as if I was at a party in Greece. Special praise must be given to James Willoughby Moore as Pepper, who had every audience member laughing at several points in the show, especially during ‘Does Your Mother Know’ which is a personal favourite song of mine – this scene definitely stood out as the best comedic moment of the night.

Nicky Swift as Rosie and Helen Anker as Tanya also provided some of best moments in the show, including ‘Dancing Queen’ and before they were even introduced on stage, I could tell immediately which characters they were; their characterisation was spot on throughout.

The atmosphere in the audience during the bows and during the songs performed after was electric and everyone in the room was dancing, clapping, and enjoying the show alongside the performers on stage. It was a spectacular way to end the night, giving the audience a chance to join with the singers and celebrate the show with them. There is nothing I can criticise about the show or any of the performers; they all put amazing effort into carrying out the show and it truly paid off. Mamma Mia! is a musical I will never get tired of seeing!

The show made me smile, laugh, and cry and I would recommend it to anyone looking for joyful evening at the theatre. It’s playing at the Birmingham Hippodrome until 14th May and the tour continues until April 2023.

Musical Review: Beauty and the Beast – A Double Perspective