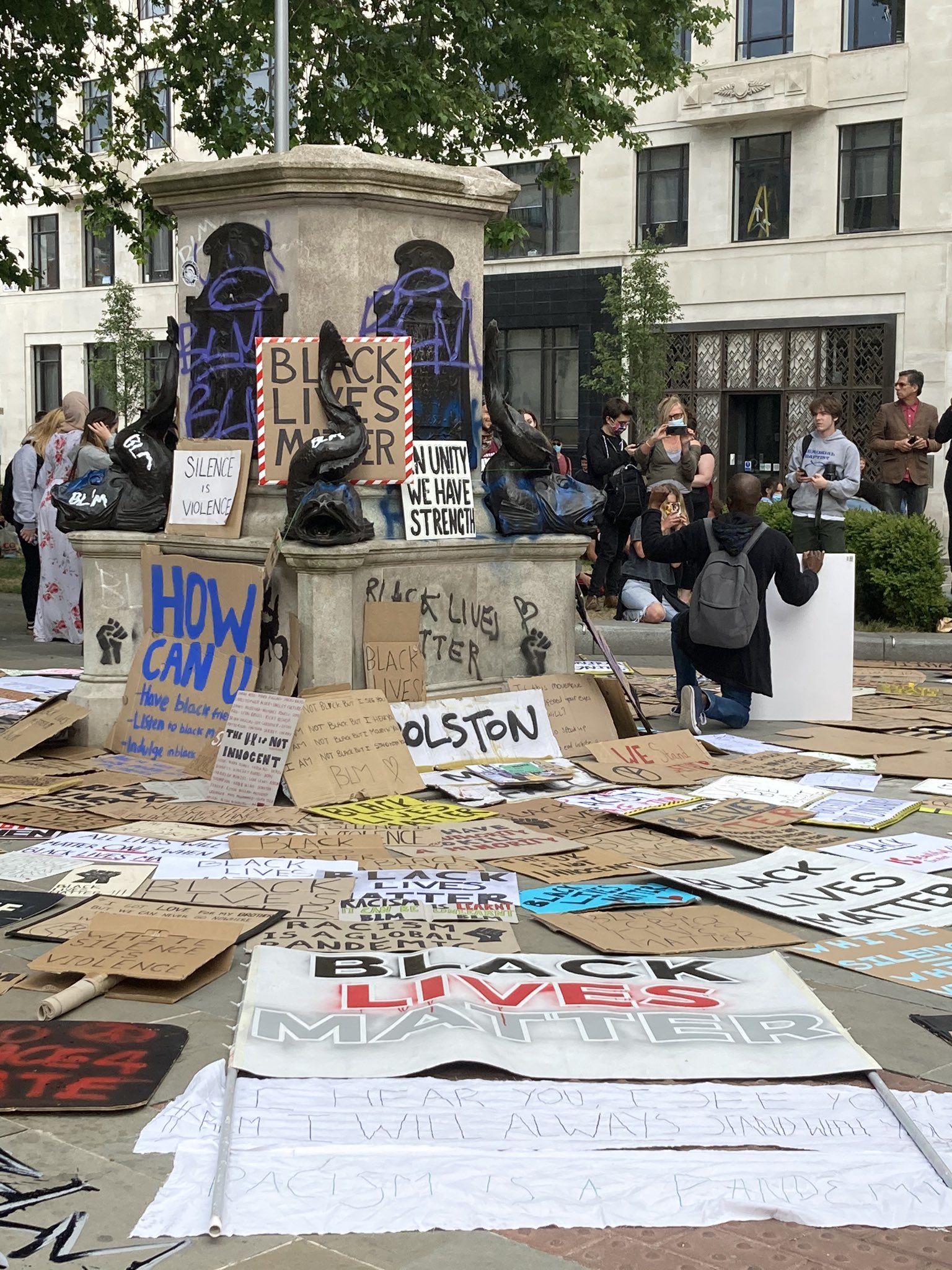 Protesters Toppling Statues: Rewriting our History or Redefining our Pride?

Written by Freya Wainstein
Published at 11:00 on 27 June 2020
Images by Caitlin Hobbs

Amid the protests taking place in solidarity with the Black Lives Matter movement, protesters have begun to vandalise and forcibly remove statues of racist figures across the UK. Beginning in Bristol, a statue of Edward Colston was pulled to the ground and rolled into the harbour. This comes in reaction to his position as a slave trader. Colston profited off huge amounts of human suffering: around 80,000 men, women, and children were transported by his ships from Africa to America. Similarly, in Brecon, in mid-Wales, a plaque to the slave ship captain Thomas Phillips has been ripped down. Whilst in Poole, Baden Powell’s statue has been boarded up after declassified documents exposed his hope to strengthen ties between Scouts and the Hitler Youth. This is not just happening in the UK, but also throughout Europe and the US.

The reaction to these powerful symbolic acts has been mixed. Whilst the mayor of London, Sadiq Khan, has taken it as a catalyst to review statues with connections to the transatlantic slave trade, he also called for the Cenotaph in Whitehall and statues of George Washington, King James II, and Winston Churchill to be boarded up to prevent unrest. Then, in a lengthy Twitter thread, Boris Johnson spoke out against protesters, suggesting that the removal of statues is ‘to lie about our history.’ He was particularly concerned about a statue of Churchill. The Prime Minister recognised that Churchill ‘sometimes expressed opinions that were and are unacceptable to us today’ – for example, Churchill referred to the white race as ‘a stronger race, a higher-grade race’ – but continued that ‘he was a hero, and he fully deserves his memorial.’

I argue that this reaction is mistaken and misguided. Statues may be educational, but first and foremost, they are symbols of pride. Thus, removing statues of slave-owners and imperialist figures means redefining who deserves our pride, not rewriting our history. It makes the statement that racists no longer deserve our acclaim.

Moreover, if the removal of statues means rewriting history, Johnson is suggesting that we interpret history a certain way, by building statues of the people we deem worth celebrating as a way to educate people about our cultural history. My dispute with this is twofold. Firstly, if it were the case that the only way to learn about our cultural history was by memorial, Berlin would still have statues of Hitler. Yet, whilst he played a huge part in German history, these were all removed because there are other ways to learn about history than with a bronze idol. I agree with The Guardian journalist John Crace that Johnson’s statement demonstrates ‘a staggering inability to understand the difference between eradicating the difficult and complicated nature of the country’s past and actively memorialising and celebrating it.’

Secondly, I believe history can be better understood as a process of constant reflection and re-evaluation. When a statue goes up, it indicates how we understand that person and their reputation at that time. Yet, clearly how we judge people changes alongside our understanding of the wider world. One journalist who discusses the removal of statues argues that ‘we must accept that over time facts don’t change but how we interpret them does.’ Thus, the removal of statues means redefining who we recognise as praiseworthy and impressive in our history, rather than the history itself. Whereas, leaving these sorts of statues up is to actively tolerate these figures’ abhorrent participation in the suffering of human beings. It illustrates a refusal to accept and condemn the full history of these figures, the good and the bad.

However, perhaps this situation is more nuanced than I have initially made out. For example, the removal of controversial statues may be easier said than done. I spoke to a history teacher at a secondary school in London who argues that the advocacy of removing statues with links to slavery is ‘a clear indication of a (fair) ignorance as to the intricate and somewhat troublesome history we have in Britain; a country that was built, not just on slavery, but on often brutal colonialism.’ She noted that as a result, this undertaking would be ‘more wide-reaching’ than we might initially believe and suggests ‘educating and adding information to our history. Not removing it.’ Perhaps the answer, then, is to have plaques accompanying controversial statues, acknowledging the problematic parts of their legacy. Similarly, Churchill’s granddaughter has suggested moving his statue to a museum.

Yet, it still seems to me that the preservation of any of these statues sends a stark and troublesome message, that we are happy to celebrate someone despite their racism. Not only is this a step in the wrong direction, but for the black citizens of this country, it is a slap in the face. We cannot commit to doing better whilst indicating to young people or tourists exploring the UK that we are proud of these racist figures. We can no longer ignore the bigoted history of many key figures in our country or simply shrug off this part of their legacy as acceptable because it was a ‘different time.’ The removal of controversial statues may be a bigger task than we can currently conceive; it may be difficult; it may even pose a threat to Britain’s cultural history. But, redressing the racist history of this country was never going to be a comfortable or easy journey.

So, if by rewriting history Boris Johnson means that we are reconsidering who deserves to be celebrated today, he is correct. In that case, we should be proud to be doing so. Removing racist statues is an act of anti-racism and no one figure is more important than justice.