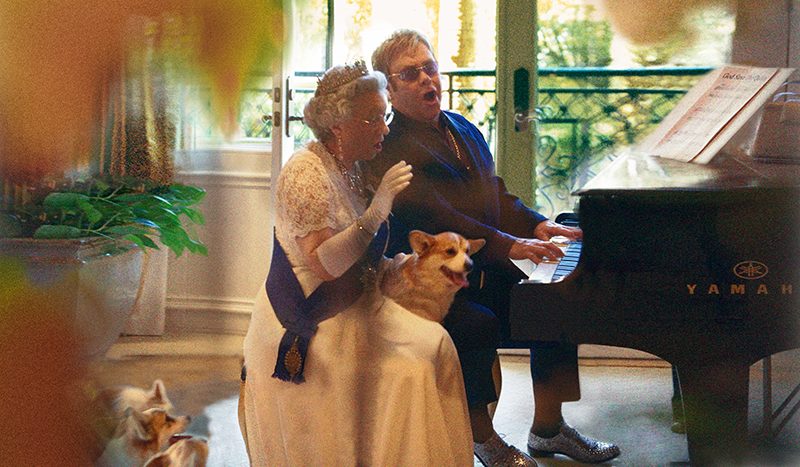 In 1741, Johann Sebastian Bach composed The Goldberg Variations, to ease the insomnia of the Count Kaiserling of Saxony. In 2022, The Covid-19 Variations were also created to soothe, but additionally to cause people to question and have a good giggle at the bizarre pandemic experience. With nineteen short pieces of music and film, one for every stage of the COVID-19 experience, this was a highly unique and entertaining performance.

The piece was composed by Richard Thomas, who explained in the post-show Q&A that he wanted to capture ‘scenes that chart one poor sucker thinking that he’s gonna make the best out of this time.’ The music was then presented to BAFTA-winning artist Alison Jackson, who added satirical imagery with celebrity lookalikes and ‘fake news’ crafted around the COVID-19 experience. Finally, Phillip Edward Fisher performed the piece live with expert flare, watching along with the audience on a small monitor so that he could interact with the film.

With quirky silent-film-style headings, the piece began with ‘B.C: Before Covid.’ This launched into raunchy scenes of royals partying, celebrities gathering, and the Queen eating KFC. While generally the images relied on the shock-factor of exposing celebs in compromising positions, some of it was outrageously normal. The Queen taking cash out from an ATM, for example, or passing William Hill with her corgis in a blue suit that matched the betting shop – everyday situations that we simply can’t imagine Her Majesty being part of. It was these uncanny, anti-austerity shots that really showcased Jackson’s skill, reminding me of Cold War Steve’s hilarious collages.

The second film, ‘Turn on CNN,’ adopted a flowing piano backing that resembled Camille Saint-Saëns’ Aquarium. Indeed, this nod to a bewildering enclosed space seemed fitting as the film showed celebrities slowly losing their minds. Birmingham-born Ozzie Osbourne was straightening his hair with an iron; Trump was learning ‘Russian For Dummies.’ A frantic staccato introduced the celebs challenging themselves to Joe-Wicks-style exercise routines, with the Queen amusingly winning the 100-metre sprint.

By the time we reached film number 10 – ‘Stir Crazy’ – the Charlie Chaplin influence seemed clear, with characters waddling about manically. Well-known stereotypes, such as Meghan Markle and Kate Middleton fighting, were critiqued as much as they were mocked. Of course, everybody has their own opinion on how far satire should go, and for me, the material involving Greta Thunberg went too far. Particularly as Thunberg emerged as a climate activist when she was merely 15, the sexualised imagery of her felt wildly inappropriate and dangerously close to the kind of bigoted climate-denial in the recent Netflix hit Don’t Look Up. Having said that, as Thunberg was often pictured alongside Trump, the man who shamelessly cyberbullied her, it could be interpreted as a clever critique of ineffectual world leaders.

Later, ‘Suddenly Feeling Rough’ showed celebrities at their breaking point, with angry outbursts from Gordon Ramsay (such as attacking a sous chef with whipped cream), that honestly could have been genuine footage. Jackson constantly played with this idea of truth versus falsity, with grainy home-video shots that felt eerily real. One member of the audience even asked in the Q&A how the celebrities had consented to be shown having ‘serious mental breakdowns,’ only to be gently told that they were mostly performed by lookalike actors.

Perhaps, these cinematic breakdowns served as a blown-up celebrity version of the panic we all felt during lockdown. Recurring imagery, such as Trump tucking into mountains of fast food (based on reports of his eating habits), seemed to comment on our consumptive culture. Fisher’s piano trills slowly built up to a state of absolute chaos, exposing the absurdity of 2020, in addition to the metatheatrical strangeness of the piece.

The final film, ‘A.C – After Covid,’ depicted champagne-soaked celebrities returning to the lavish parties that, let’s face it, they never stopped having over the pandemic. This hypocrisy was portrayed through images of sickening wealth, unexpectedly contrasted with genuine footage of daily life. The camera dwelled, for example, on a sparse street with several isolated figures armed with shopping trolleys, risking their lives to buy groceries for their families. Artistic Director Sean Foley later commented that he wanted the viewer to be ‘very occasionally reminded of the real world,’ and that originally there had been far more everyday shots. I think this would have improved the experience, as these wake-up moments seemed few and far between, or perhaps I simply could not identify them within the vast sea of celebrity fake news.

The piece ended on a single dull note, providing a bizarre, unresolved end to a wonderfully bizarre and unresolved performance. In one of the most lively Q&As I’ve ever attended, the audience expressed their views on the show. One person commented that it was ‘piercingly moving’ and showed ‘the desperation of these people’ which captured the slightly uncomfortable feeling behind the laughs that the film inspired. Foley also summed up the multiplicity of the emotion when he described the piece as ‘comical, political, subversive, fun, disturbing.’

While occasionally relying too strongly on the sexualisation of women, this piece created astute imagery that will stay with me for a long time. Both exceeding and unsettling my expectations, The Covid-19 Variations was a truly smart satire, and a courageous venture for the Birmingham Rep.

What is Reenactment and Why do People Do It?