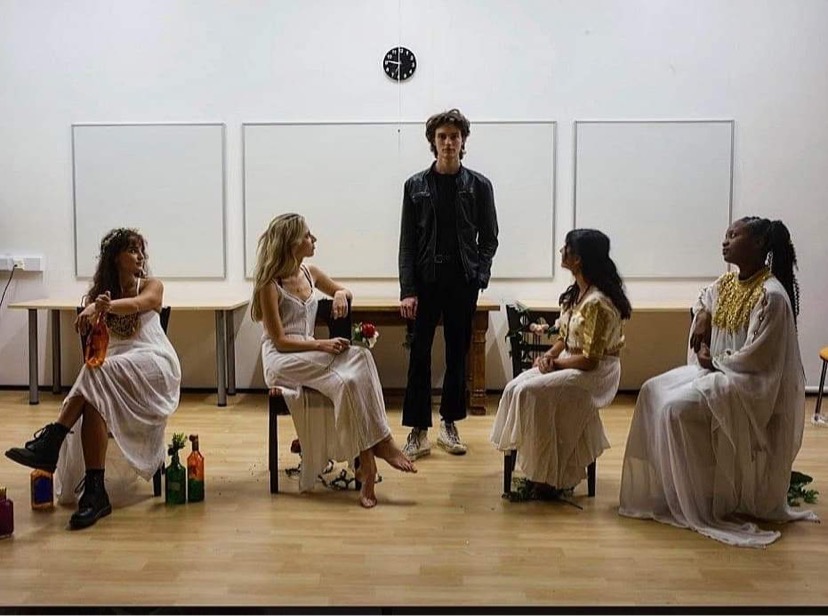 Culture writer Charis Gambon reviews Women, Scorned, a play being put on by the University of Birmingham’s society Article19 about four women from Greek Mythology

Women, Scorned is a modern interpretation of Greek classical stories, which focuses entirely on the story of Four Greek women. The piece provides an opportunity for the women to be able to tell their story themselves rather than the through the interpretations that others have created about them.  The main characters of the play are Helen of Troy, Circe the sorceress, Queen Clytemnestra, and Medea the Witch. An additional side character to the play is Hades. The piece takes place in a waiting room to Tartarus, where all four women are waiting to enter eternal damnation.

However, in a rather topical and comical way, Hades states that there is only one place in Tartarus and that the other three women will be let go, commenting that this is due to ‘Union striking.’ The women are provided with the opportunity to choose amongst themselves who will be the chosen one to enter Tartarus and are given a time limit to choose.

In order to decide, the women agree to a trial of telling their tale and being asked three questions, one by each of the other women. In order Helen, Circe, Clytemnestra, and Medea tell their tales and are asked their questions.

Medea does not originally reveal her name to the other women and her name is revealed at the end of the first act. Having lived much later than the other women they would have been unaware of her, even with the knowledge of her name.

This would be a great twist if you are familiar with Medea’s myth, however without knowing, the tension as you wait for the others to realise her story disappears.

Helen, Circe, and Clytemnestra are truthful when they tell their story, but Medea is revealed by Hades to have lied at the end of the play. Sadly, the ending is rather abrupt, and the audience does not get long to see the reactions of the other women. Which, considering the acting throughout the rest of the play, would surely have been excellent to see.

Elle Jackson, Isabelle Jones, Sophie Tosin-Talabi, and Elle Ambekar’s acting was powerful, and each woman was clearly suited to the role that she had been chosen to portray; the high quality of acting allowed for the personality of each Greek woman to shine through.

Women, Scorned balances humour and storytelling well. Nathaniel Leaf who played Hades is a perfect example of this humour as he showcased a very sarcastic and jokey Hades.

Third Year student Zainab Rao managed to create a unique and interesting play. She managed to show that she was clearly influenced by classics, while managing to bring the stories into the current century. If her writing is this well thought through, she will go on to create great plays in the future.

One minor criticism is that the play does not fully invest on two major elements; the first being the feminist undertones (which would have been better if more fully stated), and the second being the twist ending. The piece either needed the reveal to be a shock to the characters, while the audience watch knowing the reveal will be disastrous (which is a typical part of Greek tragedy) or to make it a surprise to the audience also.

However overall, I would suggest that the piece is largely a success and that it is clear that all the participants involved have worked extremely hard to make the play work. Despite the small issues I have pointed out I did overall enjoy the performance of Women, Scorned. Theatre Review: The Hound of the Baskervilles

Theatre Review: The Cat and The Canary