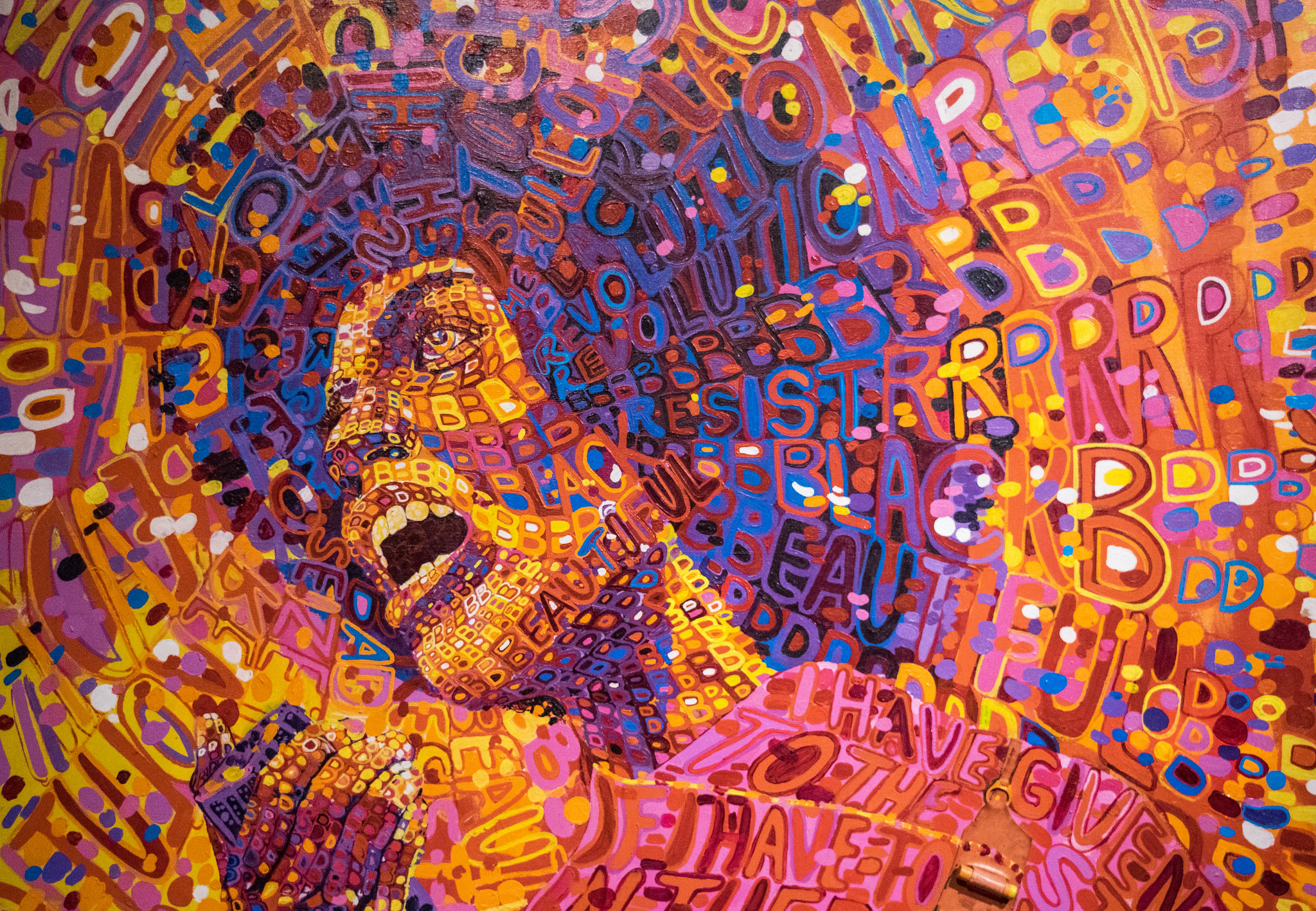 Art is a primary mode of human self-expression that has been used for activism and rebellion throughout history. Whether it is through music, theatre, writing or art, individuals can release their passions and form some sort of identity by means of their creation. Regarded as the first modern Afrocentric cultural movement, the Harlem Renaissance in America, from 1910 until the 1930s, highlighted the striking lack of African American-authored art. This became the starting point from which the Black Arts Movement (BAM) later emerged.

Beginning in 1965 and lasting into the 1970s, the BAM was a group of African American poets, artists, dramatists, musicians and writers with a drive to make the arts demonstrate pride in Black history and culture. The aim of the BAM was to establish a new form of art, which would pursue ‘Black’ and not ‘White’ standards of value.

Imamu Amiri Baraka, known as LeRoi Jones, is largely credited with starting this movement, in the wake of Malcolm X’s assassination in 1965. Amiri Baraka, born in 1934, gained an English degree before serving in the American Air Force for 3 years. It was only after moving to Greenwich Village that his passion for political writing developed, both in prose and poetry, as he fell into the company of musicians and writers. Art allowed Amiri Baraka to expose problems of both racial and national identity faced by black Americans. Indeed, many regard his early writing as ‘incendiary’, designed to shock and rouse his readers to the oppression he and other African Americans faced.

Watching the Civil Rights Movement gain in momentum, Amiri Baraka developed a distrust of White America, which he reflects in his play The Slave. Art became a tool for Baraka to augment his voice and carry his political concerns, awakening America to injustice. Amiri Baraka should also be praised for the influence his work has had on teaching future Black poets how to react through words to their lived experiences and suffering.

Another influential writer at this time was Audre Lorde. Lorde was born in 1934, growing up in Harlem to parents from Grenada. Her writing shows how being a Black, queer woman working in White academia informed much of her work. Through both personal experience and political ideals, Lorde made striking contributions to feminist theory, critical race studies, and queer theory, with essays such as The Master’s Tools Will Not Dismantle the Master’s House.

Lorde perceived the value of diversity in art, and how humanity’s differences can spark creativity. She used the arts as a public platform for consoling others who endure similar hardships. By connecting with other Black women, Lorde hoped to empower those who identify with her experiences. Her popularity is a mark of her success at this. She has won several awards, notably the American Book Award for A Burst of Light in 1989.

The poet June Jordan was another prominent name in the Black Arts Movement. Born in 1936, she was the only daughter of her Jamaican parents. Jordan grew up in Brooklyn, attending Milwood High School, in which she was the only African American of the school’s 3,000 students. Jordan recalls what was striking about her education, was the voluble lack of work by Black artists. She later married Michael Meyer but eleven years on, the couple separated, leaving Jordan a single parent. She devoted herself to writing poetry and working as a free-lance journalist to support herself and her son Christopher.

During the 1960s Jordan joined the Civil Rights Movement, standing in solidarity with the ‘Freedom Riders’ at Baltimore demanding the enforcement of desegregation. As well as engaging in political activism, Jordan wrote her first book of poetry Look at Me in 1969, speaking of the issues she experienced as an African American.  Over the successive years, Jordan authored 28 books of poetry. Her poems are known for their accessibility and exploration of identity.

Art was a means of activism that enabled Jordan to celebrate Black culture and establish solidarity with contemporary Black writers. While teaching in New York, she encouraged her Black and Puerto Rican students to write in an idiom that reflected their community. Thus, art went beyond political activism to instead convey Jordan’s pride in her identity as a Black woman.

Nikki Giovanni, born in 1943, grew up in a predominantly Black suburb in Ohio, with her mother and sister. As a student at Fisk University, Tennessee, Giovanni was involved in the Student Non-violent Coordinating Committee. From here, Giovanni became an active participant in the Black Arts Movement. Her first poetry collection, titled Black Feeling Black Talk, encouraged black solidarity and revolutionary action. She embraced poetry, hoping to raise awareness of the struggles concerning the rights of Black people.

Giovanni’s work was positively received and in 1969 the New York Times awarded her the title ‘Princess of Black Poetry.’ After her son was born, Giovanni focused on creating poetry for children that celebrated Black history such as Knoxville, Tennessee (1994). Giovanni perceived the importance of the arts within education for establishing in children a sense of pride in their Black identity and culture. She has later become involved in the hip-hop community; most notably showing her support of the late Tupac Shakur by getting ‘Thug Life’ tattooed on her arm.

Perhaps the greatest product of the Black Arts Movement was the Black Arts Repertory Theatre and School (BARTS), founded by Amiri Baraka in 1965. The intention of BARTS was to achieve artistic and civil liberation for the Black community. Indeed, BARTS had many success stories, producing notable artists like Sun Ra, Albert Ayler and Sonia Sanchez. BARTS made an important breakaway from racist traditions such as Black theatre being performed by White people wearing blackface. Instead, all BARTS plays were written and performed entirely by Black artists. Sadly, due to inadequate funds and unprecedented surveillance by the FBI, BARTS was forced to close after only one year. However, BARTS had a lasting, positive effect on the arts; currently Yale University library contains 34 works from the school. BARTS inspired the creation of many Black theatres and schools throughout America, including the New Jersey’s Spirit House theatre that was also founded by Amiri Baraka.

The Black Arts Movement paved the way for many Black artists such as Toni Morrison and Alice Walker to speak about the injustices they face. Furthermore, BAM carried a firm message of Black pride that changed world literature. From this time on, African Americans gained a greater presence in the arts. Perhaps the Black Lives Matter protests owe a legacy to the BAM as one of the first examples of Black artists in America demanding a platform, showing the world the inequality they continue to face, and which must be eradicated.