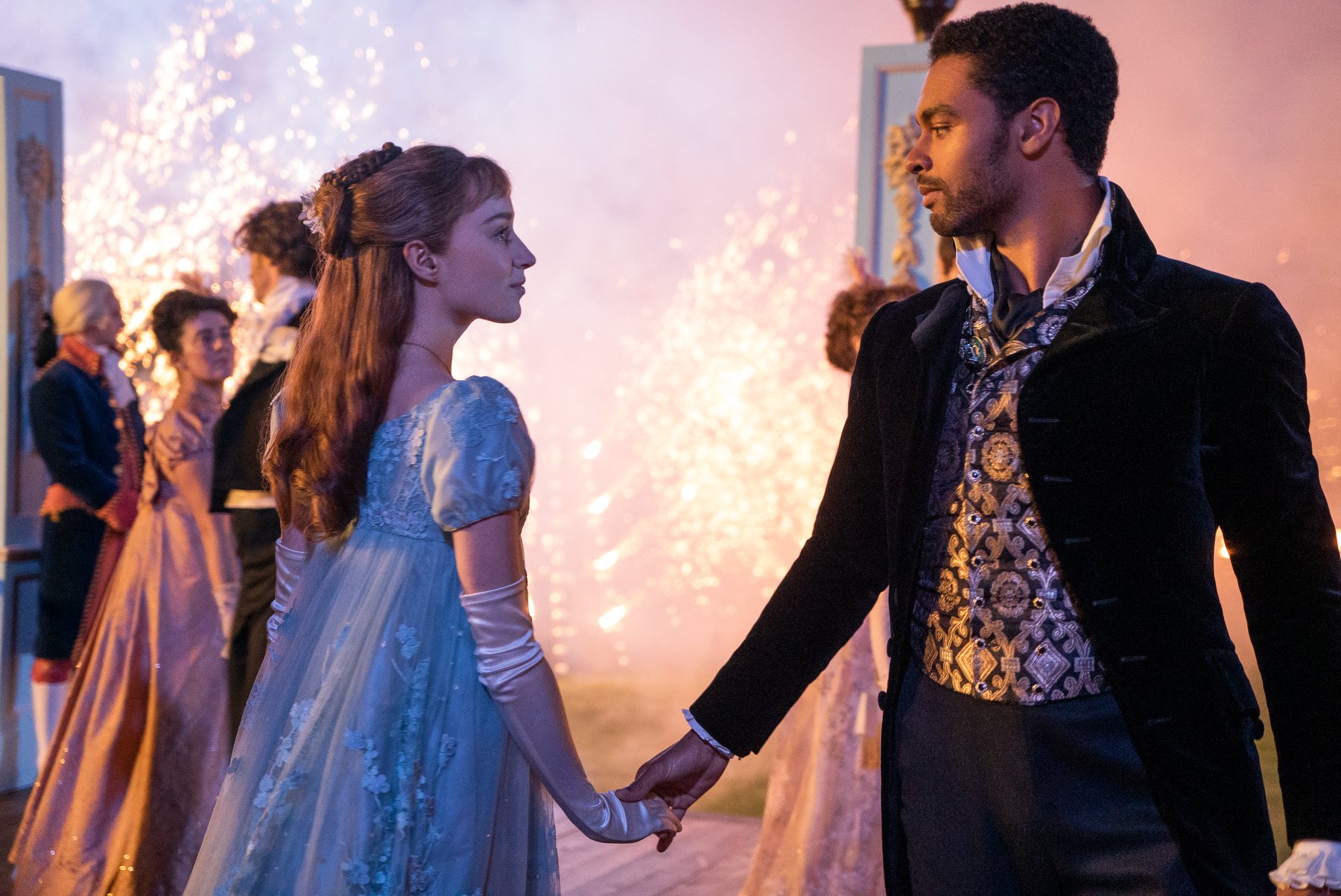 TV Critic Erin Osgood discusses the practice of colour-blind casting in Bridgerton and the musical Hamilton, asking just how historically accurate we want our period dramas to be

Written by Erin Osgood
BA American and Canadian Studies and English, interested in politics and culture
Published at 15:00 on 22 January 2021
Images by @NetflixUK on Facebook

Netflix’s Bridgerton has proved itself to be a new sensation, having been streamed in 63 million households in the first four weeks of release – the streaming service’s very own diamond of the season, if you will. A key aspect of the critical response to the series has been its colour-blind casting, which follows in the footsteps of other rejections of historical accuracy in favour of representation of the world today. The official recording of Hamilton, which famously features an almost exclusively non-white cast, was an instant hit when it was released last year on Disney+, becoming the second-most-watched straight-to-streaming title of 2020. But how productive is this when the narratives of period dramas are so out of touch with modern life?

One’s initial response to this debate largely hinges on one factor – how important is historical accuracy? This is a lot more complex than saying that certain characters wouldn’t have acted in certain ways, rather it is critiquing the societal structures presented within these stories. Bridgerton, a tale of Regency-era London during the social season of the elite, is hardly representative of life in the 21st century. But period dramas are often designed to offer a sense of escapism, a brief taste of the elegance and regalia of Britain’s past. Notably, however, without its unsavoury flaws.

If the intention was for Bridgerton to be more entertaining than challenging, why did the show choose to address race in the first place? In episode 4, Lady Danbury (portrayed brilliantly by Adjoa Andoh) alludes to life in England before King George married Queen Charlotte, played by black actress Golda Rosheuvel – ‘two separate societies, divided by colour.’ Such a suggestion, that institutional racism and segregation was solved through one marriage, is at best misguided and at worst utterly crass. We know that it doesn’t work. If the showrunners wanted to offer some critical introspection as to why such a society could exist, it needs to last longer than one seemingly throwaway line. Such a clumsy explanation of why members of the English aristocracy were surprisingly diverse was a disservice to the fantasy thus far and suggests a sense of racial harmony that still doesn’t exist.

The same critiques could be applied to Hamilton. A story about America’s Founding Fathers – notorious advocates of slavery, genocide, and social elitism – starring a mostly black cast singing about their bravery and genius. Excuse me? Since its streaming release, initial criticism has resurfaced of the show’s oversimplification of America’s shameful beginnings. Whereas Hamilton’s 2015 premiere came at the sunset of the Obama presidency, often shrouded in a selective haze of nostalgia, its 2020 streaming release to the wider public came at the apex of global racial tensions in the Trump presidency. Needless to say, the critical thinking surrounding the musical’s casting has somewhat evolved – it is less likely to be unquestionably lauded, with more concern granted to the notion that it effaces a racist past.

However, colour-blind casting for historical drama is not a new phenomenon – the theatre has been doing this for years, and not just in Hamilton. Ruth Negga’s portrayal of Hamlet in 2018 may have evoked some pearl-clutching, but it was largely a critical success. Conversely, Broadway’s The Great Comet of 1812 closed shortly after white actor Josh Groban was replaced with Hamilton alum Okieriete ‘Oak’ Onaodowan, exposing just how whitewashed creative production teams still are. Moving on from arguing about who appears on stage requires recasting who is behind the curtain as well.

This is not to say that nothing good can come from increased diversity in period pieces, far from it. Not only is it an opportunity for up-and-coming young actors to star in roles that are perfect for them (I don’t think anyone could object to seeing Regé-Jean Page on their screen), but it allows young people of colour to see themselves in every context, rather than being typecast or tokenised. Besides, even if these stories are not entirely historically accurate, Britain, in particular, was far more diverse than purists would have us believe. How can people decry diversity on the sole grounds of accuracy, when period dramas often selectively remove the exploitation of black and Asian people?

Fundamentally, ‘colour-blind’ casting is perhaps the wrong term entirely. To suggest such decisions are ‘blind’ evokes the same kind of ignorance as those who proudly proclaim ‘I don’t see colour’ – they most definitely do, they just choose to ignore the consequences of any racial insensitivity. Perhaps a more suitable term is colour-conscious casting. It denotes the most important factor in such a strategy; a conscious, considered approach to inclusive storytelling. Representation isn’t a catch-all method of freeing oneself from accountability, it is a continuous and ongoing practice.

Despite my qualms, I still enjoyed Bridgerton, and Hamilton is a truly impressive work of art. But we cannot accept diversity at face value. The instances of colour-conscious casting are becoming ever more common – and I applaud that – but this is more than a tick box exercise. If we are to ever achieve equal representation on screen, we must look critically at what stories we are telling, and what more we can do to bring diverse voices to the helm. Bridgerton is a start, but there is certainly a long way to go.