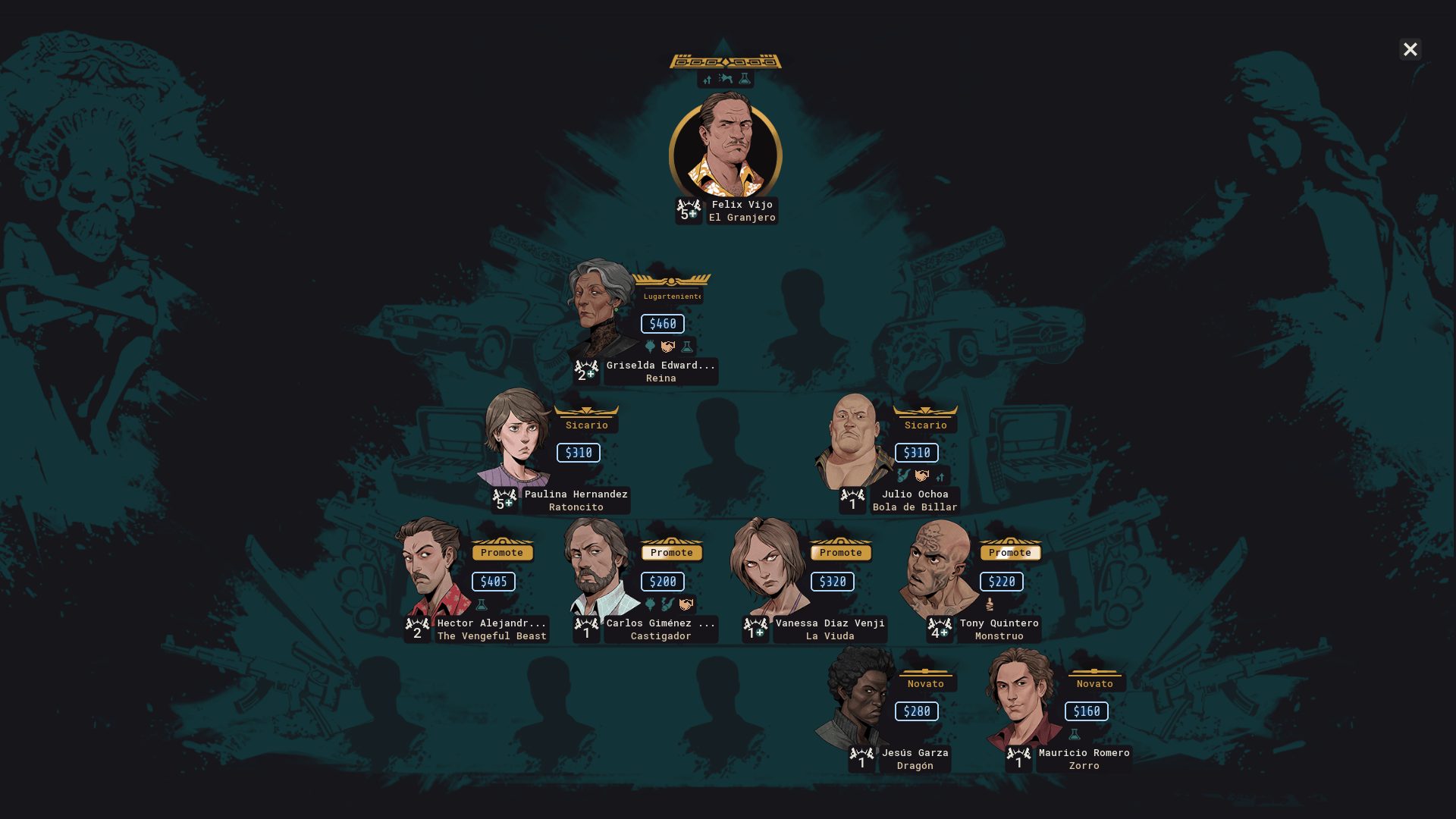 Written by Dashiell Wood
A BA English student with far too much to say about videogames both old and new who constantly witters about them on the internet. You can find me here on Redbrick, managing my own publication Arcadeberry.com or contributing my review scores to OpenCritic. You can also find me on Twitter @DashiellWood.
Published at 11:00 on 8 February 2021
Images by TinyBuild/Moon Moose

Cartel Tycoon promises to give players a thrilling insight into the heart of the cut-throat narcotics trade in 1980’s Latin America as they assume the role of a powerful drug kingpin. I sat down with the game’s recently updated ‘Uncut Earliest Access’ build to embrace my inner criminal and to try and see if TinyBuild’s upcoming management simulator looks like it will be worth the wait.

Even in early access, the game already boasts some particularly strong visuals. The top-down camera provides a great vantage point with which you can view the array of colourful cities and districts dotted all around the game’s large peninsula map. Zooming the camera right up buildings lets you properly examine their low-poly aesthetic which merges a very vibrant mix of bright pastel colours and pleasantly smooth surfaces. Despite their simplicity, I found each building’s unique model still contained a surprising degree of detail and on my first couple of runs I often hit the pause button just so I could fully appreciate just how good a lot of the buildings I was creating looked.

The choice to utilise these simpler models does wonders for performance which was, for most part, butter-smooth but with some notable exceptions like building roads and accessing certain sub-menus causing a few seconds of noticeable stutter. This should, of course, be expected in such an early build of a game but it was still undeniably a little annoying to mess up the placement of a new path or accidentally clicking the button to buy the wrong upgrade just because of some lost frames. The UI, whilst nicely stylised, was also a tad unreliable with a couple integral elements, like the main menu, sometimes failing to show entirely.

In the gameplay department, I found Cartel Tycoon’s mix of supply chain building and resource management a refreshing departure from the more traditional city-builder I was expecting. Very reminiscent of the likes of Ubisoft’s Anno franchise, there is loads of meaty micro-management to sink your teeth into. From producing raw materials to refining and storing completed products before sale, creating an elaborate web of farms, airports and warehouses to manufacture and distribute an array of opiates was as rewarding as it was daunting. The lack of any hands-on tutorial guidance made starting out a far tougher process than I probably should have been, but by experimenting across a few saves and consulting the lengthy written tutorial, which can be easily accessed on the fly by clicking an on-screen button, I soon began to get the hang of things.

The separation of clean and dirty money is perhaps the simulator’s most intriguing mechanic. Each of your business endeavours contributes to one of two distinct financial balances, with illegal undertakings producing ‘dirty’ money whilst those above board produce clean money. These two currencies can both be used to pay for standard maintenance and construct new buildings, but any kind of upgrade to do with controlling and improving cities, which serve as a kind of important central hub for each region, can only be obtained with clean money. Luckily, there are a handful of ways you can launder your dirty money into clean money and coordinating your supply to make sure you have enough of each adds a challenging new layer of complexity to contend with.

Other gangs also pose a constant threat and whilst sabotaging your rival’s operations or stealing the control of enemy controlled cities was an awful lot of fun, it always risks retaliation. You can even inadvertently trigger investigations by the authorities, who can totally destroy your supply chains by confiscating your funds and raiding your resources or even assassinate the current head of your cartel.

In the few hours I had with Cartel Tycoon, I felt like I had only scratched the surface of what the game had to offer and there are several fully fledged mechanics, like the recruiting of lieutenants or the unique playable characters, which I am very much looking forward to exploring more deeply in our full review much closer to the title’s release which is currently slated for later this year.

If you are interested in supporting the game’s development, you can learn more over at the official website. Purchasing the ‘Earliest Access’ will nab you a copy of the game prior to release with a number limited edition bonus items included.