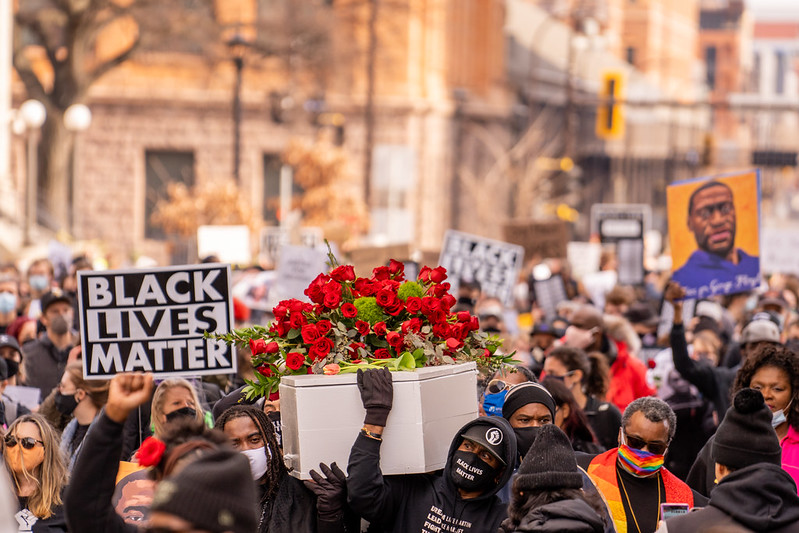 Chauvin is Convicted, But We Have a Way To Go Before True Justice is Served

Comment Writer James Simpson reflects on the Derek Chauvin verdict, suggesting that although it unmistakably signals a move in the right direction, we still have a long way to go in reaching justice

Written by James Simpson
First-year English Literature student
Published at 14:00 on 5 May 2021
Images by Chad Davis

Content Warning: This article mentions the murder of George Floyd and other details readers may find upsetting.

On 25 May 2020, George Floyd, a 46-year-old black man living in the city of Minneapolis, Minnesota, was murdered by police officer Derek Chauvin. Floyd, who had been arrested on suspicion of using a counterfeit $20 dollar bill, was apprehended by Chauvin, who proceeded to kneel on Floyd’s neck for over nine minutes, killing him. His victim spent his final moments crying, repeatedly, ‘I can’t breathe.’

The tragic event of Floyd’s death sent shockwaves across the globe. Mass protests, driven by demands for justice and police accountability, took place in the United States and beyond throughout the summer of 2020. The world saw a resurgence in the Black Lives Matter movement. Almost a year later, on 21 April 2021, Chauvin was formally found guilty of murder. Following an intense, three-week trial in Minneapolis, the disgraced police officer was found guilty on three charges: second-degree murder, third-degree murder, and manslaughter. The verdict was, reportedly, reached by the jury within less than a day. Though he is expected to appeal this verdict, Chauvin may well face up to forty years imprisonment.

Derek Chauvin’s fate has, understandably, brought with it a wave of solace and relief for the friends and family of Floyd. After a year of profound social unrest and unsuppressed rage, the punishment has finally been meted out. The crime has been counted. Justice has been served. Or has it?

There is no denying that April’s verdict is a mark of progress. Within the wider context of racial injustice in America, it is one of the first, formal acknowledgements of racially-motivated murder by a law enforcement official amidst decades of unfulfilled punishments and endless unaccountability. There is no doubt that the outcome has precipitated significant, and hopefully lasting, change in how the US Justice System addresses police brutality and institutional racism. Nevertheless, it still feels insufficient. The verdict, however proportionate it may be to Chauvin’s horrendous crime, feels incomplete. As is obvious, and as has been emphasised by pundits and observers the world over, nothing will ever succeed in bringing back George Floyd. It is all well and good to celebrate the result of April’s trial. It does not change the fact that an innocent man died at the hands (or, to use a more apt description, ‘foot’) of someone who represented a system intended to serve and protect. Formal ‘justice’ may have been secured, but the tragedy can never be reversed.

True ‘change’, if we are to use that word, will never come about for as long as the shadow of racial injustice continues to cast itself over the United States, or, indeed, the world. We must understand, truly confront, the reality of the situation: that Floyd’s murder is but one in a sea of thousands upon thousands. Accountability in the case of Chauvin’s verdict is good, but it is the utter, bare minimum. And this cannot be stressed enough. What about those thousands of other instances of police murder? What about the countless black men, women, and children who may well have gone on to live happy and fruitful lives, were it not simply for the colour of their skin? What about Daunte Wright, Breonna Taylor, and others who lost their lives to police brutality in just the last year? What about the long, painstaking history of persecution which continues to haunt the minds of millions of African Americans? An injustice of this scale cannot be resolved and disentangled through an instance in which the courts, just for once, ‘got it right’. Widespread, structural transformation is required. What that entails, exactly, is not entirely certain. The scale is colossal, and it is impossible to summarise the ways in which it ought to be addressed in so few words. What is certain is that the ills of the American system, of an entire country which was built on the suffering of black people and rigged right from the beginning to oppress them, cannot be redressed through merely tweaking around its edges.

In the days following last month’s trial, something which came to my mind was an interview, recorded sixty or so years ago, of notorious and influential Civil Rights campaigner Malcolm X. In the interview, X was questioned regarding his opinion as to how, and if, true racial equality can be realistically achieved in America. He responded with the following: ‘If you stick a knife in my back nine inches and pull it out six inches, there’s no progress. If you pull it all the way out that’s not progress. The progress is healing the wound that the blow made. They won’t even admit the knife’s there.’ This analogy remains devastatingly true, even over half a century later.