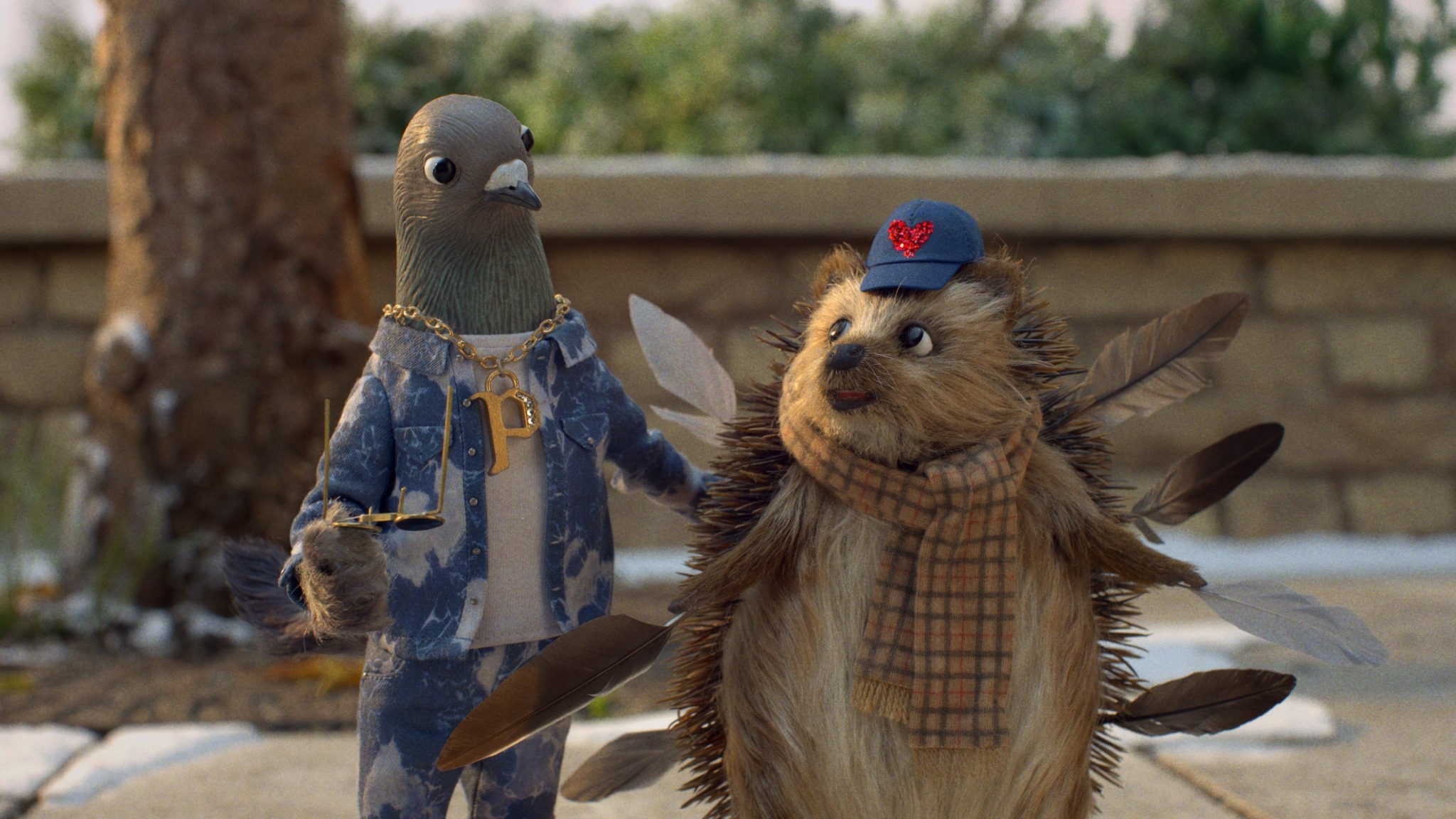 Written by Heather
Published at 10:30 on 26 November 2020
Images by @JohnLewisandPartners on Facebook

How do we know it’s Christmas, you ask? Simple: When the annual barrage of Christmas TV adverts makes it positively unavoidable.

For me, Christmas came around the 13th of November, the release of the coveted crowning jewel of the festive season – the John Lewis Ad – and I’m sure, for you, it couldn’t have been much later.

It’s certainly an interesting time of year. For most, a time of family and coming together; but for big business, it’s a time of fierce competition, where various advertising departments try their wits to create the ultimate heart-warming narrative, condensing the meaning of Christmas to under a minute, in a way that will capture the hearts and minds of the country, and in doing so, raise both profile – and profit.

It is no surprise, that the market for Christmas advertising has grown exponentially over the past decade, with last year’s advertising blizzard coming in at an estimated 6.8 bn, John Lewis historically being the biggest spender, previously said to have “spent about £8m on its ad featuring Elton John playing his hit ‘Your Song’” according to the BBC.

Such Hollywood spending remains largely all in response to the overwhelming emotional response of the nation – and the opportunity it presents to exploit it – with “half” of “1,000 Brits interviewed on behalf of the Advertising Association” in 2017, admitting that they had been “moved to tears” by Christmas ads; “One in six” having said they had even “changed plans to watch the premiere of their favourite Christmas ad”. As of this year, in conversation with Kantar, BBC reveals that consumers “spend about £30bn in the so-called “golden quarter” leading up to Christmas”. Furthermore, the picture of profit for businesses to make through the advertising period is looking pretty jolly indeed.

However, in the age of Corona, strategies have changed, and the best ads have altered their usual feel-good formulas to incorporate messages of community, family, and ‘giving’ – or at least the illusion of which – in line with Prime Minister Boris Johnson’s appeal for a united front with talk of “get[ting] through this winter together”.

In light of this, behold a crop of this year’s Covid cohort; Those which succeed in effectively pulling on the heartstrings, to those that simply fail to bat an eyelid.

Coming in at top spot, an advert which has recently received great media attention – although not for the reasons it deserves. Titled ‘The Gravy Song’, the ad has become a point of controversy, not because of any issue of its own, but because of the existing racism it has illuminated in a proportion of its viewers.

Such individuals took to Twitter to express their issues with the portrayal of a black family at Christmas time, “slamming the commercial for ‘not representing them’”, as The Metro reports. This all comes of course just a few months after the wave of UK Black Live Matters protests, undermining the popular “counter-narrative” of those who say, “Britain is not racist like America” (The Independent).

The ad in question shows a telephone conversation between father and daughter set against a montage of Christmas ‘home videos’ in which time elapses. The overwhelming warmth and sentimentality radiating off of this particular family unit are deceptive enough to appear genuine and non-commercial, drawing many people to Twitter in its defence: One viewer tweeted “Sainsbury’s advert reminded me of Xmas at ours! One day it will be like that again.”  While another said, “Best ad of 2020 in my opinion”. It is this reminder of family and tradition that is undeniably therapeutic for its viewers at a time of isolation and uncertainty. The ad is simple but effective.

This year’s long-anticipated John Lewis ad deserves mention for its lesson in artistry. It embarks on a journey through different animated aesthetic mediums as we follow the passage of a tender heart symbolism exchanged between loveably quirky characters. We can only hope to understand it as the passing on of ‘A little love’, the title of the accompanying song written and voiced by Celeste, a song best described as “delicately placed piano notes [which] tread delicately, as if over a fresh powder of snow” (The Independent)

The advert presents us with an imagined utopia where person and pigeon alike live harmoniously sharing and receiving “small acts of kindness”. Never has a John Lewis ad appeared more relevant to the here and now, addressing the possibility within a pandemic for selfishness, by reminding us of opportunity that Christmas time brings for spreading kindness and goodwill to all. It is one of the very few, aside from Amazon’s ‘The Show Must Go On’, that actually acknowledges the pandemic, and tailors it to explore the meaning of Christmas in the current political climate.

Unlike previous years, John Lewis – similar to Boots’ ‘Help Fight Hygiene Poverty’ campaign – has also swapped out its usual taglines for a final message of charitability, revealing a philanthropic campaign to raise money for charities including Home-Start and FareShare.

Although, to say the ad has come through with providing us that seasonal kick of painful joy, leaving us emotionally unavailable for 2-5 working days, would be more than charitable. Whilst John Lewis has indeed fulfilled their side of the bargain, providing us with an advert that does encapsulate the quintessential Christmas spirit, it lacks its iconic Lewisian heart-wrench ending, akin to 2013’s ‘The Bear & the Hare’ or 2014’s ‘Monty the Penguin’; a key component which ultimately, gives the John Lewis advert’s their name. Without it, it’s just an another well-made Christmas advert.

Another advert which successfully jumps on the bandwagon of Christmas kindness is Aldi’s annual instalment of ‘Kevin the Carrot’, first appearing in 2016. This year’s ad shows the plight of Kevin to get home in time for Christmas after being stranded miles off in a flying accident. But following the help of Harry the hedgehog and Santa himself, Kevin is reunited with his family, as well as the spread of strategically placed Aldi products that await him.

Whilst Aldi have done well to establish an ongoing festive brand which its viewers can connect to and grow to adore, the ad does nothing itself in the grand scheme of advert history. The concept of ‘getting home for Christmas’ is in itself a very cliched storyline – just ask Coca-Cola. Therefore, if the objective is to create an averagely entertaining, yet easily forgettable Christmas advert, which can neither be overly disputed nor overly praised, and remains entirely identifiable as what it is – an Aldi Christmas advert – then perhaps Aldi has arguably succeeded. The average person, if asked, would to well to say “It’s alright”, but that’s all.

And finally, an ad that showcases what it means for an advertising team to get it fundamentally wrong.

Set to the tune of Britney Spears’ ‘Oops!… I Did It Again’, Tesco rejects classic Christmas tropes of old for a more contemporary comical ad, which figuratively “absolves us of our sins” (Creative Boom). It humours us with a string of silly confessions, from bulk buying to giving a bad lockdown haircut, before reassuring them (and us) that “After a year like this, we believe there is no naughty list.”

Packaged up as a harmless ploy to “treat” yourself after a hard year, what the ad actually does, however, is encourage overindulgence and disinhibition, far removed from the wholesome meaning of Christmas attempted by the others above. It directs us to the ugly, gaudy, commercialised side of Christmas that is all about material excess, appealing to the greed in human nature, opposing all sense of compassion and selflessness.

Given the current pandemic, where an array of cases of “breaking lockdown”, including illegal raves – which in September The Sun suggested “contributed to the 300 per cent spike” – the disobedience and selfishness of some has exacerbated the Covid scene for all. Ultimately, there is something to say about an ad which suggests we should be rewarding those who have been, as they phrase it, “naughty”.

2020 US Election Night: The BBC’s take on Old Men Running