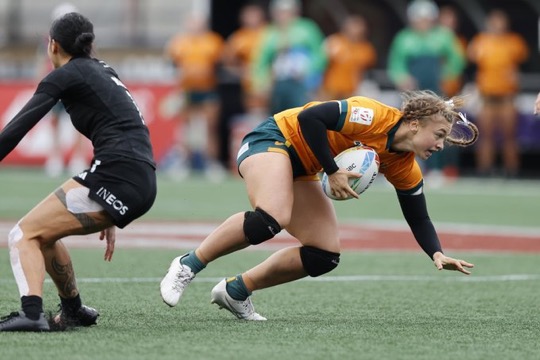 Written by Joe Liddicot
Hi, I'm Joe, a Second Year Political Science and International Relations student studying here at UoB. I have a passion for sport, especially football and basketball, playing and watching them both obsessively.
Published at 15:00 on 4 May 2022
Images by Twitter/@WorldRugby7s

Welcome to Redbrick Sport’s ‘Commonwealth Countdown,’ where we bring you all the news, insight and interviews in the run-up to Birmingham 2022, taking place from 28th July to 8th August right here in the UK’s Second City.

The best of the best rugby players in the world will descend upon the Midlands this Summer, as rugby sevens will feature on the Commonwealth Games programme for the – ironically – seventh time since its introduction in 1998.

The top-ranked sides on both the women’s and men’s side of the game – Australia and South Africa respectively – will be competing, as well as both of the winners of the Olympic 7s tournament in Tokyo last year. With world-class talent scattered generously across the contending teams, the tournament promises to be exhilarating.

Sevens is a model of rugby designed for those who enjoy a more open game. With just seven players on each side despite still playing on a full-sized pitch, the contest is higher scoring and even higher paced. The rules are the same as those of rugby union, apart from the seven-a-side and the seven-minute halves – they really went all-in on the ‘seven’ thing – making the game short and explosive.

This summer, the tournament will take place at the Coventry Stadium over three days, culminating on Sunday 31st July.

While the chance of a home victory is relatively slim, the chance that England collect a medal is not outside the realm of possibility. Both the women and men have achieved one third-place finish this season in the HSBC World Rugby Sevens Series, meaning a bronze medal is well within their ability. The women currently sit 7th in the series ranking, averaging a 50% win rate in their 12 games so far. Although they won’t be the favourites to grab a medal, the home advantage may just give them the edge and spur them onto the podium.

The men are in a similar predicament, finding themselves 8th in the rankings, also possessing a 50% win percentage this campaign. Will they be able to power their way onto the podium this July?

Regardless of the performance of the home nations in Coventry, the sevens tournament will be the sport to watch for thrilling high-intensity action in the Midlands sun (we can hope). Fiji’s victory in the Olympic Men’s tournament was one of the defining images of the 2020 Olympics, and of the sporting world more broadly; they will be going to Coventry eyeing another success at the expense of the powerhouses of world rugby.

The Australian women’s squad are the form team of world sevens at the moment, winning 20 of their 22 matches in the World Series this year, and boasting a commanding 18 point lead at the top of the table. Look out for their star, Charlotte Caslick, who leads the Wallabies in tries scored, tackles made and runs made this season. The all-action 27-year-old has asserted herself as the best in the women’s game and will be hoping to light up the Commonwealth games with her fast feet and technical brilliance.

South Africa lead the men’s Sevens Series by a slim margin to Argentina – who won’t be competing – but they will be looking to improve on their current form which has seen them fall from the podium in the last two tournaments. Australia, Fiji and, of course, New Zealand will look to pounce on that vulnerability and steal gold away from the Springboks.

While these players are accustomed to visiting more glamorous cities on the world series – Dubai, Los Angeles and Singapore to name a few – they will surely come to the Birmingham games hungry to outdo their rivals and stand atop the prestigious Commonwealth podium. Rugby sevens is undoubtedly one of the sports to watch this summer, July 29th cannot come soon enough.