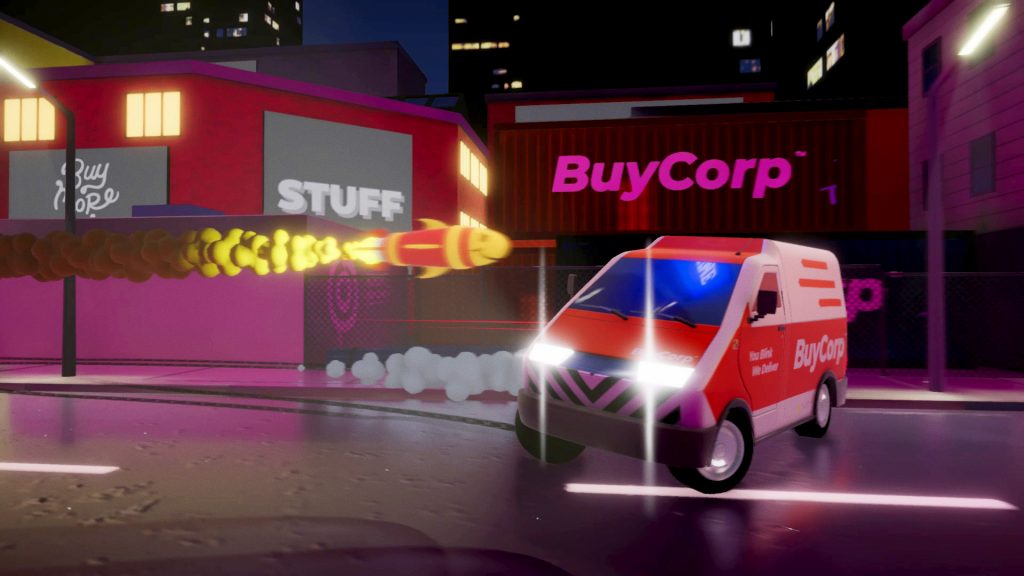 Drive Buy brings colourful car combat to PC and Switch later this year. Dash Wood gets in the drivers seat to tell us what to expect

Written by Dashiell Wood
A BA English student with far too much to say about videogames both old and new who constantly witters about them on the internet. You can find me here on Redbrick, managing my own publication Arcadeberry.com or contributing my review scores to OpenCritic. You can also find me on Twitter @DashiellWood.
Published at 11:00 on 12 February 2021
Images by Glitchers

Whether you are procuring some snacks to help get you through your online workload, getting your hands on a copy of the latest novel to mull over in the bath or just picking up a new desk tidy to help organise your workspace the joy of ordering things online should not be underestimated. Being locked at home for the best part of almost year has given all of us a good excuse to engage in some digital retail therapy and I know from personal experience that the little squirts of serotonin prompted by receiving a pile of packages has become one of the few sources of excitement getting us through lockdown life. In the age of next-day (and sometimes even same day) delivery it has become even easier than ever to order things we don’t need over the internet.

I am almost surprised that such a staple of modern life has taken this long to be translated into videogame form, but that all going to change later this year with the release of Drive Buy, a light-hearted take on the experience of online ordering with an enjoyable competitive twist. Centred around the cut-throat world of ecommerce, Drive Buy has players assuming the role of one of a handful of delivery drivers working for the retail giant ‘Buycorp’ as they fight for vehicular supremacy across several neon-drenched urban environments. Over the last few days, I have been trying my hand at the game’s ongoing private beta and want to share a little bit about what you can expect to see in the final release.

At its heart, Drive Buy is very much a party game. The four-player free-for-all online matches are a format perfectly suited to quick bursts of fun and the use of easy-to-enter room codes to join online matches makes it easy to jump into the game with a couple friends. The promise of cross-play for the game’s two launch platforms, PC and Nintendo Switch, is a particularly tantalising one and I can see it becoming a great way to reconnect with some more casual gamer friends who are usually separated from my play sessions by platform differences. I was surprised to see that Drive Buy features a surprisingly meaty progression system which should be more than enough to keep you entertained even when your friends are away.

Each of the eight unlockable drivers has their own unique vehicle, which can be fully customised via a plethora of array of skins, emotes and other personalisation options. Special items and in-game currency are unlocked through gaining XP, which is awarded based on your performance in a match and contributes to your progression along a reward tree. The beta currently has only twenty items to get your hands on, but there plans to increase this number to one hundred and introduce a changing season-based model in the full release.

Although there are some substantial gameplay changes across the three playable game modes, the objective of each match always remains the same – to climb the leaderboard by obtaining the most money before the match timer runs out. This can be done by stealing the score from other players or completing various mode-based objectives. Out of the three I tried, I found the standout game mode was Delivery, which has players scrambling to bring packages to map waypoints as quickly as possible in manner which is as incredibly enjoyable as is suspiciously like Sega’s Crazy Taxi. Whichever mode you end up playing however, the vehicles’ arcade-like handling makes hurtling around corners at high speeds and tactically avoiding other player’s projectiles and traps a total blast.

One area I felt a little disappointed with was the selection of maps. At the time of writing there are only two maps to choose from and as the small player cap for online matches means that they must be small to keep the action intense, I can see re-treading the same microscopic arenas becoming old quite quickly. Luckily, there are however plans to bring more maps to the game and I would love to see a bit more variety in their aesthetics, with both the maps currently on offer being set in night-time city environments which look slightly too alike to feel truly distinct. On a different note, whilst some environmental props like trees and even pedestrians react in an amusing cartoon-like manner to being hit by your car, I found being able to glitchy clip through streetlamps was a slightly unnerving experience, but this presumably unintentional ‘feature’ will likely be ironed out before a full release.

Despite the limited map selection and the few teething issues I have mentioned, my experience of the beta was a highly enjoyable one and I’m very much looking forward to seeing how the game looks as the beta progresses and community feedback is taken on board. If you are a fan of the battle modes of Mario Kart or are looking for a more casual alternative to online genre giants like Rocket League, Drive Buy is shaping up to be one package which will certainly be worth waiting for.

If you’re interested in the game’s development, you can keep up to date by visiting the official website or adding the game to your Steam wishlist.